Are machines really saving us that much labour? (As usual, I have gone overboard with my BBB post. You might want to get a cup of tea before reading on.) 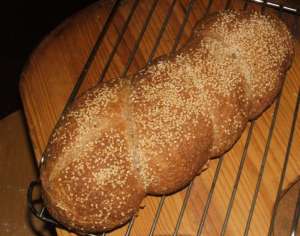 This month, Ilva (Lucullian Delights) chose the BBBabes’ challenge, cracking the whip and calling the BBBabes back into line. She decreed that there would be no more stuffing or filling.

It was back to basics for us. With just flour, water, salt and yeast. But not just any kind of flour – we were instructed to go back to basics there too, by using spelt flour, milled from the ancient grain Triticum spelta related to wheat (Triticum aestivum).

Let’s see now. The first electric mixer was introduced for the home kitchen sometime in the 20th century.

Question: how long have people been making bread?

Yes, we do have a handheld blender with a whip attachment. And we also have an ancient handheld electric cake mixer. But I’m terrified of the carnage (at my expense) if I break either of those. It just wouldn’t do to disturb the peace of our lovely neighbourhood by having sirens blaring and yellow “crime scene” tape suddenly being wrapped around our house.

3 April 2013, 09:11 When this says to whisk at high speed, I’m assuming it’s referring to an electric mixer. Which I don’t have. The idea of whisking by hand at high speed is making me very tired. And I haven’t even got the whisk out yet!

Having said that, I’ve been experimenting with hand-kneading wet dough and I suspect that the Richard Bertinet method of hand-kneading brioche might be the answer. (I haven’t yet had the nerve to try this kneading method on the croc. The memory of the croc’s gaping maw with its mocking grin haunts me too much.)

I found myself seriously considering skipping the May bread because of the instruction “Mix the dough at high speed using a whisk until the dough no longer sticks to the sides and bottom of the bowl.” and the words “like the Croc” – even though this bread dough is allegedly not like the terrifying Croc.

But, I’ve given myself The Talk and have seen the light. With Lien’s voice echoing in my head that we’re here because we want to challenge ourselves into making something we wouldn’t normally make, I will brave the wilds of our local health food and take out a second mortgage on the house to buy the required amount of spelt flour.

And I’m scared. I’ll be doing the whipping by hand. Wish me luck!

Because I will be making this by hand, I asked if I was correct that I should probably knead the dough after mixing it and that the dough is basically kneaded after being whipped by the machine.

The reply:yes, you only whip it good in the evening. Don’t you even have a hand mixer? […] Or are you more of the mediaeval strain?

Hmmm. I guess we are Mediaeval. We use our French whisk to whip cream – it’s faster and way less noisy than the Braun hand blender.

I suppose I could use the whip attachment for our Braun handblender but I’m not sure that it’s strong enough to be whipping bread dough. I think there is a whipping cream attachment for our food processor too – also pretty sure that it’s not strong enough for bread dough. (One of the times that I attempted to tame the croc, I managed to break the shaft on our food processor.)

We also have a really ancient hand-held electric mixer but again, I’m not sure it’s strong enough to be whipping bread dough either. Even if the dough IS slack, which at 80% hydration isn’t all that slack.

Yes, I think I will be Bertinet kneading.

I believe Babes can do anything.

Of course, she’s right. There’s nothing to fear. Maybe a whisk would work.

I’m still scared though. The BBBabes can do anything. It’s the “anythingness” that is disturbing me; ie: will my bread end up being anything like bread?

Well, here’s a big surprise (heh.heh. not really); the flour is still in its bag. I know everyone said not to be afraid. But all this talk of balloon whisks and K hooks and just the mention of the croc (even though they keep saying it’s nothing like the croc) sent me over the edge.

10:22 Fingers crossed that I’ll see the amazing gluten strands that Tanna talked about on her bread. I’ll also try to pay attention to the oven temperatures. (Reading?? Comprehending??? BBBabes are so demanding.)

20:30 It’s mixed. It turned out that it wasn’t too hard at all. I used the big bell whisk to mix the flours before dumping them into the yeasted water. Then I switched to a wooden spoon. There is NO way that any whisk would work on this dough.

I Bertinet-kneaded it and put it back into the UNwashed (eeeeeeek!!!) bowl (at least I wasn’t being disobedient by refusing to oil the bowl. Who knows what the BBBabes might have done? After all, they all have whips out this month!), covered it and let it sit on the counter for about 20 minutes then into the fridge it went.

12:31 At last! It appears to be rising. Maybe we’ll have something a little lighter than a doorstop after all. 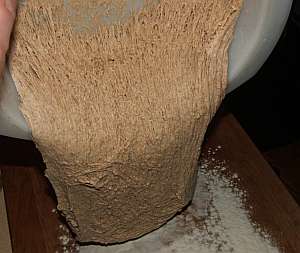 16:27 I shaped the bread about half an hour ago. It was really easy to manipulate and Wow! I can’t get over the gluten strands. Tanna did say they were there but I didn’t expect them to be so dramatic. I’m hoping that you can get a sense of the definition from the photo. 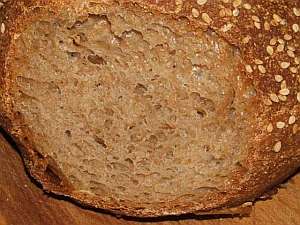 No, it’s definitely not a doorstop. It was surprisingly light in weight. While there wasn’t a dramatic amount of oven spring, it still filled out nicely, baking to a beautiful deep golden brown. The added bonus was the lovely moist but not too moist crumb.

I love it when the holes in the crumb are shiny like this!

And it’s beautiful! And it’s good! And it makes great toast

Here is the BBB May 2013: Whipped Bread recipe. And here is what I did to it:

Whipped BBB Spelt Bread
adapted from a recipe in “Home Baked: Nordic Recipes and Techniques for Organic Bread and Pastry” by Hanne Risgaard

1.) Yeast: The BBB recipe calls for 5 gm of fresh yeast. If you are using fresh yeast rather than dry, rub the yeast into the flour before adding the water and salt.
Because it’s not easy to find fresh yeast here, I used Rose Levy Beranbaum’s formula:

And then to add to the confusion, I also used my sister’s handy javascript converter and came up with the following:

2.) Water: Please do not use water from the hot water tap. Instead, heat the water in a kettle or microwave. To create lukewarm water, add cold water until it is the correct temperature of 90F (32C). (If you are allergic to using a thermometer, you can do the baby bottle test on the back of your wrist.) Please note that before the yeast is added, the water temperature must be BELOW 120F (49C) because yeast begins to die when the temperature is higher than 120F.

4.) Kneading: The BBB recipe calls for mixing the dough with an electric mixer, saying to Mix the dough at high speed using a whisk until the dough no longer sticks to the sides and bottom of the bowl. But being the Luddite that I am, I decided to the time-honoured method of using my hands to develop the dough.

5.) Oven Temperature The BBB recipe calls for the bread to be baked at 475 for the first 5 minutes and then at 410F for the final 20-30 minutes. We know from experience that the bread would burn on the outside if we did this in our oven.

6.) Spraying The BBB recipe calls for spraying water onto the walls of the oven just before putting the bread in. I just can’t do that. Our ancient electric oven might object too strenuously. I hate the thought of the glass on the door breaking too. I’ve discovered that liberally spraying the bread itself just before putting it in the oven does virtually the same thing.

7.) But I LIKE warm bread just out of the oven!! N.B. Of course you will want to serve warm hot cross buns. Reheat them after they have cooled completely. (They are still baking when they first come out of the oven!) To reheat any UNsliced bread, turn the oven to 450F for 5 minutes or so. Turn the oven OFF. Put the bread in the hot oven for ten minutes. 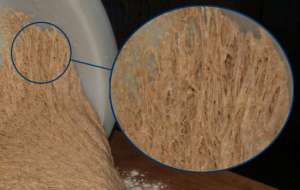 I just can’t get over those strands! They’re amazing.

Oh yes. One more thing. Did I need the machine? No. Mixing and hand-kneading really was a breeze. I urge you to give it a try. If I can do it, anyone can.

This time we are back to basics, a loaf of good bread, simple but with difference, this one you don’t knead but you whip! And you whip it good! It’s from a bread book by the Danish baker Hanne Risgaard and it is called Home Baked: Nordic Recipes and Techniques for Organic Bread and Pastry. I have made several breads and cakes out of and they have all been good. I made this bread months ago and we liked it a lot, it has a great crust and texture. The dough is soft/wet but not soft like the Croc, it is much easier to work with. She uses spelt flour, both sifted and whole-spelt but I used only sifted spelt flour and then normal wholewheat flour. If you can find spelt flour use it because it has a nice flavour, if not you can try some other flour that absorbs water more or less to the same degree. The spelt flour I find here is similar to AP flour.

We know that you too will WANT to whip this bread into shape!! To receive a Baking Buddy Badge to display on your site: bake whipped bread in the next couple of weeks and post about it (we love to see how your bread turns out AND hear what you think about it – what you didn’t like and/or what you liked) before the 27 May 2013. If you do not have a blog, no problem; you can also post your picture(s) to Flickr (or any other photo sharing site) and record your thoughts about the bread there. Please remember to email the Kitchen of the Month to say that your post is up.

Please take a look at the other BBBabes’ May bread: 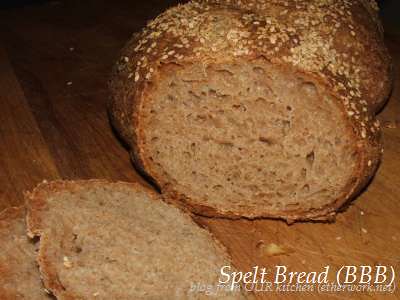 8 responses to “Spelt Bread Whipped into Submission (BBB May 2013)”