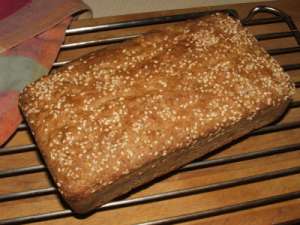 After all the rich food, cookies, candies and cakes galore, it was a relief to turn to baking a whole grain loaf.

And the Babes being crazy, is it any surprise that the loaf we were to make wasn’t from just any whole grain? Of course not! The Babes always choose a challenge. This month, it was to use spelt flour instead of wheat flour.

I must admit that whole grain spelt (Triticum spelta), the ancient grain related to wheat (Triticum aestivum), would not have been my choice of grain if it hadn’t been for Astrid’s suggestion that we all try it.

It’s not that I didn’t want to try it.

It’s just that I’ve been afraid to try it.

Even though Astrid has been baking with spelt rather than wheat for a while. And she loves it. Other friends of mine have been doing the same thing. And they love their spelt bread as well.

Spelt (aka Dinkel, Farro) has been around for centuries.

[Spelt is the best grain, warming, lubricating and of high nutritional value. It is better tolerated by the body than any other grain. Spelt provides the consumer with good flesh and good blood and confers a cheerful disposition. It provides a happy mind and a joyful spirit. No matter how you eat spelt, it is good and easy to digest.]

But everything else I’ve read about it says that it can be tricky to use. And I’m lazy. I don’t want trickiness with flour.

Not to mention that spelt isn’t cheap. And I’m a skinflint.

But to continue my argument with myself, no flour right now is inexpensive.

So. With the other babes breathing down my neck, I realized that it was high time for my plunge into spelt flour baking. I slogged through the snow down to the health food store (I can’t get over the fact that people don’t bother to shovel their walks! Especially because they have postage stamp sized lots!!).

I bought some organic whole spelt flour from the bin ($1.49/lb – WHY is our healthfood store selling flour by the pound rather than the kilo?!) I eyeballed the amount to scoop into the bag. Of course, I have NO idea what 600gm looks like and ended up getting only 350gm – enough to make one loaf.

Astrid’s recipe also calls for spelt flakes. The health food store didn’t have spelt flakes in the bins and only sells them in 500gm bags (for $5.99). Again, not cheap.

But I knew that I could use any leftover spelt flakes in granola or multigrain bread. Or, of course, in future loaves of this spelt bread, should it prove to be fabulous.

So I unzipped my purse and with my penny pinching fingers handed over the cash.

Step one: Astrid’s recipe calls for 40 gm fresh yeast. Using my ridiculous calculator that takes into account the various formulae I came across in my books and on the internet, the amount of active dry yeast to use is anywhere between 6.4 and 26 gm. I decided to go with the lower amount because there is no sugar in the recipe.

Being forewarned that the “sponge” would be quite unspongelike and crumbly, I wasn’t at all unnerved after completing the first step. I covered the bowl and left what looked just like crumb topping to sit in the oven with the light on while I went out and shovelled the walk (I know I live in Canada and that it’s January, but why oh why is it snowing again?) then came in to finish mixing the dough.

I decided against turning the sludge onto the board for kneading and kneaded the glop in the bowl. After five minutes or so, I started seeing quite a few gluten strands and decided that must be enough kneading (listening to Astrid’s cautions about overkneading). Using a rubber scraper, I pushed it into a vaguely ball shaped mound on one side of the bowl. I refrained from coating the ball with water. More water??? I think not.

I put the covered bowl into the oven with the light turned on (our kitchen is quite cold these days – around 15C) and hoped a miracle would occur and the sludge would turn into dough as it rose.

Step three: After a couple of hours, the sludge in the bowl bubbled up quite nicely. I turned it out onto a lightly floured (eermmmmm… I used unbleached all-purpose wheat flour. Are the spelt flour police going to come after me now??) and folded the now vaguely doughlike slop a couple of times. I muddled it into one of those silicone liners placed in a breadpan. After slicing it down the middle, I sprayed it with water (ha! as if it needed more water!) and sprinkled the top with sesame seeds. And hoped it would rise quickly. I was now under a double deadline – wanting to bake it before we had to leave to go out to dine with friends AND so I might be able to get my post together in time for yesterday.

Step four: Just enough time to bake before we had to leave!! Baking… As it baked for its first 15 minutes, I raced upstairs to get dressed for dinner. I thought maybe just maybe it would have some oven spring. Even though none of the other Babes so far had oven spring. (I don’t know why I thought my loaf would be different!)

But it smelled fabulous!

Naturally, you will want to make spelt bread too! Here’s the recipe we were to have followed.

1.) Milk Powder: Astrid’s recipe calls for actual milk – we just didn’t happen to have any on hand (we’d used it all up in our morning cappuccino….) so I used powdered milk and water. (We always have powdered milk in the cupboard for making biscuits.)

2.) Oil I foolishly refrained from writing out the half recipe, imagining that I’d remember to put in half of each ingredient. Of course, I forgot and added a full tablespoon of sunflower oil rather than half a tablespoon.

3.) Kneading Astrid says that the longer you knead the dough, the more air will be incorporated. But then she went on with the cautionary note to be careful not to overknead the dough! I wonder if our bread was flat as a pancake because I was afraid to knead too much…. She also says to be careful that the dough does not overrise, saying that spelt loves to overrise. Oh dear. I wonder if I should have turned the oven on 15 minutes earlier… I turned the oven on when the loaf had already doubled. 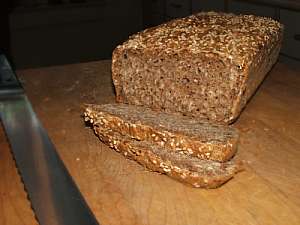 We served the bread the next day for breakfast with hard boiled eggs. It’s pretty dense bread – very much like German black bread but without the molasses…. Sliced very thinly and served warm with butter and apricot jam, it’s very good. 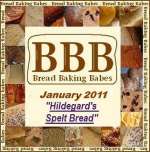 Astrid (Paulchens FoodBlog?!) is the host of the January 2011’s Bread Baking Babes’ task. She wrote:

I grabbed my bread books and flipped through the pages eagerly seeking the perfect bread for my fellow Babes to try… […] Since I really wanted to give “my bread” a kinda personal touch I thought of what is “typical” for me,… and I remembered [BBBabe, Breadchick] Mary calling me “the alternative flour Buddy” […] since I always substitute wheat flour to spelt flour wherever it is possible… there it was: the bread had to be SPELT Bread!!

If you’d like to bake along (of course you do!!) and receive a Baking Buddy Badge to display on your site, bake the spelt bread and post it before the 29 January 2011.

Read more about Hildegard of Bingen:

I have to be truthful. As healthful and nutty tasting as this bread is, I will probably not rush out to buy spelt flour to make more of this particular bread. However, I’m thrilled to have spelt flakes and will definitely be getting more of those to put into multigrain bread and granola! Thank you for this push to delve into spelt, Astrid!!