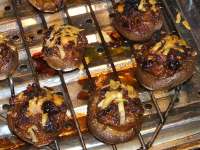 Since Thanksgiving, I have been meaning to make stuffed mushrooms. Finally, last night, I did it. And they are delicious!! Many thanks, B!!

I remember on Thanksgiving Day remarking on the taste of the basil; it was really outstanding. And I was sorry that we didn’t have a lot of basil on hand. The colder nights have pretty much decimated any of the basil plants still left in our garden. Storebought basil is okay but it’s so faded in comparison to garden basil!

So I knew I’d have to compensate somehow. Happily, we have lots of oregano still growing. I harvested the last few basil leaves (half of them already burned and black from being too cold) and a couple of stalks of oregano leaves.

As I was chopping onions, I thought about how good the Squash and Sage Lasagne made with butternut squash had been. And there was still some of that squash left over in the fridge. I decided a little of that would be a perfect addition. And as I got it and the cheeses out of the fridge, our jar of oven-dried tomatoes beckoned to me, so I grabbed a couple of them too.

And happily set about chopping, grating, sauteeing, stuffing, baking… and then serving them sizzling and fragrant as the starter to yet another feast. 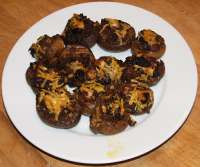 I thought that Americans might like to wow their family and friends by replicating(ish) stuffed mushrooms for their Thanksgiving dinners coming up next week. Stuffed mushrooms are dead easy to make, and even better, they can be prepared in advance. Here’s what I did:

I suspect that fresh thyme would be great too. But do make sure you include at least some fresh basil if you can get hold of it. It really takes the mushrooms up one level.

Please note that all but the last step can be done in advance.

Serve the stuffed mushrooms hot. Remember to garnish the serving plate with a few fresh herbs. Although… they still look awfully good even without the touch of green!

Have I mentioned that I adore Butternut squash? It is great on its own but it’s also good to use as a flavouring. It’s amazing how it brightens the dish, making it rich, without at all masking the other ingredients.

Duh!!! I just realized that I could have used one of our basil pesto cubes from the freezer. Silly me!! Next time! 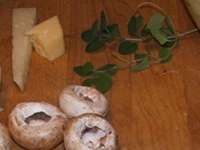 In this part of Ontario near the Great Lakes, oregano is a robust and prolific plant that absolutely thrives on neglect. It prefers plenty of sun and plain soil. The flavour is more intense if the soil is leaner.

Some time ago, when I was first planting our herb garden and we still had some sun in our small back garden, I planted “authentic” Greek oregano (purchased at some expense from Richters), genovese basil and cherry tomatoes. About half way through the summer, the cherry tomatoes and oregano were choking out the basil. Thinking about pesto, I ripped the tomatoes and oregano out in rage. I tossed the two giant cherry tomato plant into the composter – causing many renogade cherry tomato plants the next year ALL over the garden; one climbed the next door neighbours’ cedar tree, decorating it festively with beautiful out-of-reach cherry tomatoes (but that’s another story). I stuck the oregano into a tiny patch of earth beside the lane behind the garage. It absolutely thrives there. I never water it or amend the soil. It gets full sun and mocks us year after year as it flowers. We daren’t eat any of it because of all the car exhaust and any other unsavoury things that might contaminate it in the back lane.

But last year, I decided to plant oregano again. This time I put it into a pot all by itself. Once again it thrived on neglect. And it came back this year!! And thrived even more. In spite of the fact that it doesn’t really get the amount of sun it really should have. It tastes wonderful though. Just as oregano should. It’s terrific in stuffed mushrooms as well as in black bean stew or on pizza.

(The unharvested garage oregano is still as lush as ever. I have not, nor am I likely to, ever planted cherry tomatoes again.)

In the late fall, the oregano plant can be trimmed. Wash the stalks (let the leaves stay where they are) and hang the oregano in bunches upside down in a darkish area of the kitchen to dry. Over the winter, take pieces of it and crush them between your hands to remove the stalks. It will smell wonderfully of oregano! Not quite as good as fresh but darn close….

For more details on how to participate in Weekend Herb Blogging, please see the following: