summary: baking bread on the barbecue is easy with parchment paper and a pizza stone; Chad Robertson’s boule shaping method is great; submission for YeastSpotting; (click on image to see larger views and more photos) 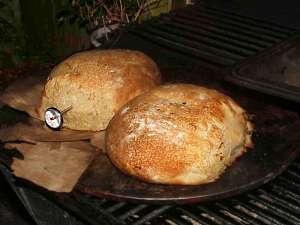 Of course, we had crusty bread when we had those amazing grilled shrimps on a bed of spinach. And because it’s summer, we’ve been baking bread on the barbecue.

We used to think we could only bake pizza, naan or buns on the barbecue. But even full sized loaves bake successfully.

When it’s hot outside (like it is here now – a revoltingly humid 30C!!), nobody wants to be turning on the oven in the kitchen!

But hogs like us still want to have our bread and eat it too. On this particular occasion, the bread was made using the ingredients and mixing section in the recipe for baguettes in Rose Levy Beranbaum’s “Bread Bible”.

But the shaping is different from Beranbaum’s description.

I’m really excited about the latest shaping technique for boules that I’ve been using. It’s based on Chad Robertson’s shaping method that I saw in the Tartine Bread video (the shaping method is at 5:54).

To do this shaping, divide the dough in two and gently fold each piece like a business letter. Then gently grabbing the side of one of the ends, make a false braid. Fold the top half over to the middle and gently make another false braid. The dough will want to roll in on itself. This is a good thing. Once it shapes itself into a quasi ball, put it seam-side down on the board and gently turn it round and round to smooth out any rough edges. 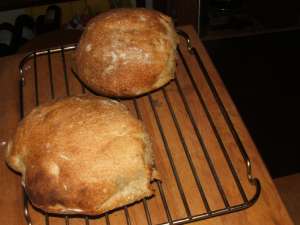 We are getting the most amazing oven spring with this shaping. Our boules are actually round rather than disc shaped!

Because of hot spots in the barbecue, we baked the bread on individual pieces of parchment paper placed on our hot pizza stone (the inexpensive kind available for around $10 at kitchen stores). Why the parchment paper? Each loaf had to be turned frequently to prevent outside burning. After the bread had been in the barbecue and was wonderfully golden, we were pretty certain the bread was done. Still, just to make sure, we stuck a meat thermometer into the centre just to check. Yay!! the internal temperature had reached around 100C (212F). Exactly what we wanted!

While the bread cooled on a rack, we got the rest of the dinner together. Then we feasted like kings on shrimps and spinach and fabulously chewy slices of crusty bread. 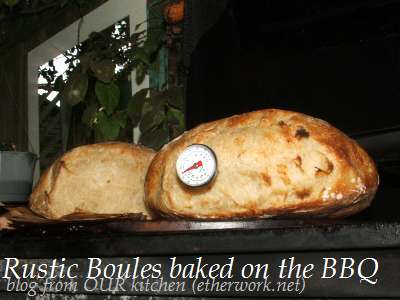 4 responses to “Summer = Baking Bread on the Barbecue”