summary: Katie’s (Thyme for Cooking) Summer Squash with Bacon; bookmarked recipe; who knew that other summer squashes were so fabulous? …maybe we should try growing this kind instead of zucchini; bounty from the neighbours, including the sweetest corn; edit: and spider…. 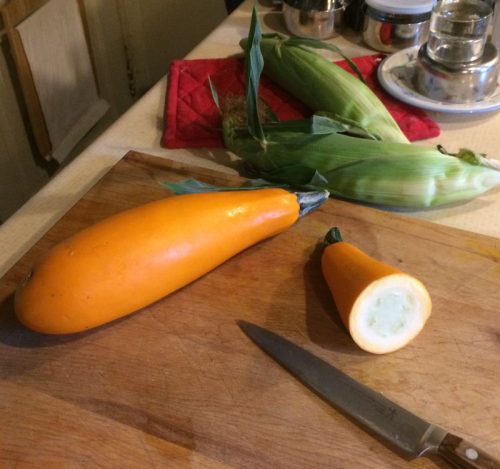 (So sorry, we neglected to photograph the tomatoes, red pepper, and watermelon. Silly us. Especially the watermelon that looked quite normal on the outside but was a beautiful golden colour inside. I’m afraid that, as usual, we were too busy eating them.)

Having never seen yellow summer squash like this, we looked around on the internet to find out what we should do.

There were recipes for ribbons salad, roasted rounds with or without parmesan cheese, grilled sliced squash, casseroles laced with cheese, stuffed squash, and STOP RIGHT THERE: Summer Squash (Courgette) with Bacon ⟸ recipe 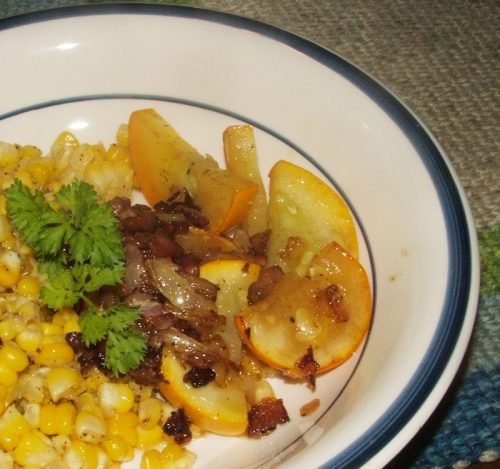 We had excellent bacon from our favourite Portuguese butcher. But we didn’t happen to have any red onion. However, we did have some beautiful white onions (they look like Spanish onions). I’m guessing that aside from the colour, there is little difference in flavour in the final dish.

Thank you, Katie! This recipe for Summer Squash is a keeper!!

And the corn? Since two summers ago, after reading Edward Lee’s lovely book “Buttermilk Graffiti”, we have been preferring to cut the corn off the cob, and lightly fry the kernels in butter. Sometimes we add miso; sometimes we add Szechuan Pepper-Salt (remind me to talk about that!); sometimes we add a tiny bit of garam masala. Sometimes, when the corn is as sweet as this corn was, we just stick with good old salt and pepper.

Local summer squash and corn… they really can’t be beat, can they? Especially when there’s bacon involved! 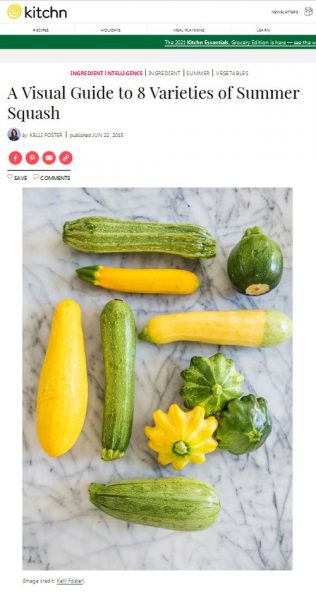 Standard green zucchini and yellow squash can be found almost year-round in the grocery store. But come summer, the markets are flooded with an even bigger variety of squash spanning all shapes, sizes, and shades of yellow and green. […]
Yellow Squash
You’ll find yellow squash in two varieties: straight neck (pictured above) and crook neck, which curves at the neck as its name implies. Both varieties have fatter bottoms and taper towards the neck. They have smooth to slightly bumpy, thin skin, and creamy white flesh with larger seeds than many other varieties of summer squash. When picked young, yellow squash are nice eaten raw, and can also be cooked into both sweet and savory applications.

– Kelli Foster, The Kitchn | A Visual Guide to 8 Varieties of Summer Squash (Image of summer squashes: Kelli Foster)
The genus Cucurbita is well known for its cultivated species which in English are called by the general names of squashes, pumpkins, marrows and gourds […] The cultivated Cucurbita species are: C. argyrosperma, which includes the cushaw type (long curved neck) of squash; C. maxima, which includes pumpkins and hubbard, turban and buttercup squash; C. moschata, which includes the winter squashes; and C. pepo, which includes both summer squash (e.g. zucchini, scallop, scallopini, crookneck and cocozelle squash) and winter squash (e.g. the common or “true” pumpkin, delicata, acorn and spaghetti squash) as well as ornamental gourds.
[…]
At least three of the cultivated species, C. argyrosperma, C. maxima and C. pepo are known to interbreed naturally with wild relatives, and the appropriate taxonomic assignments for these wild relatives vis-à-vis the cultivated species is still in flux as new information becomes available. In some instances the wild relative has been classified as a distinct species, in others it has been classified as a subspecies of the cultivated species
[…]
“Crookneck” (C. pepo L. var. torticollia Alefield) is a shrubby type with yellow, golden or white fruit which is claviform and curved at the distal or apical end and generally has a verrucose rind. It is eaten unripe as the rind and fruit harden when ripe. “Straightneck (C. pepo L. var. recticollis Paris) is a shrubby plant with yellow or golden fruit and a verrocose rind similar to var. torticolla.

OECD iLibrary | Chapter 2: Squashes, pumpkins, zucchinis and gourds(Curcurbita species), p.84, 86-87, 99 (in Safety Assessment of Transgenic Organisms in the Environment, Volume 5, OECD Consensus Documents)
Straightnecks: Yellow Squash, Zucchini, Zephyrs
Yellow squash and zephry squash are the result of a cross between crookneck and acorn squashes. Both are typically medium-sized, but sometimes tiny ones show up at farmers markets (and if you see those, scoop them up!). […]
Yellow Squash
Yellow squash are basically crooknecks without all the dramatic features. Their necks are shorter and wider and have only a subtle curve. Their skin can be completely smooth or a little bumpy, and their flesh is a little less dense. They have a lovely mild buttery flavor.

– Kristy Mucci, Simply Recipes | Your Guide to Summer Squash: How to Pick, Prep, Store, and Swap Them!

I like green zucchini and LOVE yellow zucchini, but we haven’t had a lot of success with growing either of them in our garden.

We have very little sun because of large trees in the front and back yards. Don’t get me wrong. We’re happy about the shade in the summer. […] But it does mean that we can’t really expect to grow things (like the several yellow zucchini seedlings I planted that displayed lovely male flowers but NEVER produced any female flowers at all) that expect full sun.

– me, blog from OUR kitchen | Who says we don’t have enough sun? (September 2017)
Not quite the embarrassment of squashes we hoped for….

– me, blog from OUR kitchen | Wordless Not-Wednesday: That’s it? (October 2018)
[T]his morning, as I was weeding the Swiss chard behind the garage, look what I found! Alas, they aren’t the yellow zucchini we thought they were going to be (unless you turn one of them over). But at least this is an improvement over last year’s attempt at growing zucchini when we got zero yellow zucchini

We see plenty of green zucchini in the vegetable stores. We also see beautiful yellow zucchini for a few weeks every summer. But I must say that my allegiance to zucchini (Cucurbita pepo var. cylindrica Paris) has waned a little since trying these beautiful slightly globular yellow squashes.

Perhaps we’ll try growing Cucurbita pepo var. recticollis Paris next year. We will neeeeeed to have this wonderful Summer Squash and Bacon again!

Bookmarked Recipes Some time ago, Ruth (Ruth’s Kitchen Experiments) created this event to urge herself (and everyone else) to actually make the several recipes they have bookmarked in various books, magazines and internet pages. For a time, Jacqueline (Tinned Tomatoes) took over hosting the event. Because she is vegetarian, she asked that submitted recipes be vegetarian OR that alternatives be given for how to make the dish vegetarian. (Obviously, for this, just leave out the bacon. The squash would likely be almost as good. 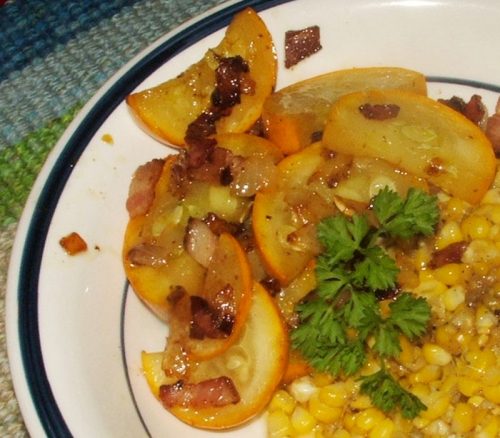 We had burgers again the other night and I made a Mushroom/RedPepper/SummerSquash/Onion medley to put onto the burgers. Wow. Wow. Wow. We LOVE this kind of Summer Squash! (No, I’m afraid there is not photographic evidence of this stellar combination.)

And in the spirit of joining in, here is our latest pet spider: 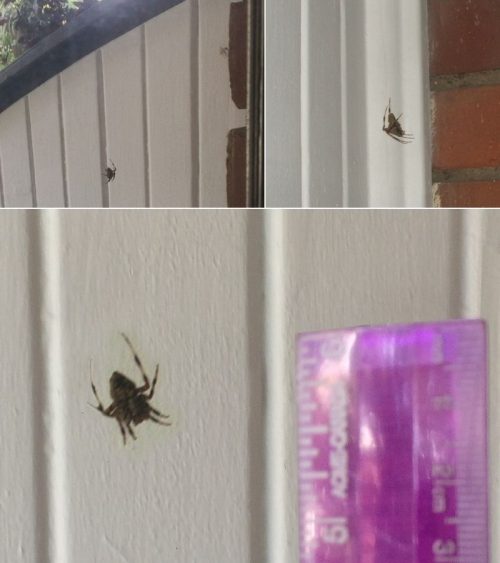