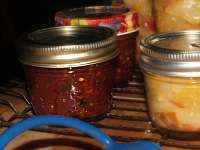 A while back, fellow BBBabe Tanna (My Kitchen in Half Cups) emailed Mark Bittman’s recipe for tomato jam. And as our local vegetable stores had beautiful Ontario plum tomatoes galore, I decided I had to try it.

The recipe called for a pound and a half of tomatoes. Not being sure exactly how many tomatoes that was, I just got a good shot. And as it happened, I got exactly a pound.

It made two small jars of jam. Very sweet jam. Here is what I did to make Bittman’s recipe:

* Bittman called for lime juice rather than lemon juice. When he was experimenting with the recipe, he used lemon juice, vinegar and then lime and said he preferred the lime. (I’ll try lime juice next time.)

** The next time I make this (there will be a next time), I’ll add less sugar and more peppers.

*** Tanna felt that there was too much ginger. She also mentioned that one jalopeno doesn’t create much heat. I should have paid more attention to that….

Over the years, I’d been served what people called tomato jam, but it was never so thrilling that I was motivated to figure out how to produce it myself. […] Good tomatoes (thus the timing of this column) and balance are crucial. You need sugar for the kind of gooey, sticky quality we associate with jam; otherwise, all you’re producing is a tomato sauce, no matter how different the flavor is from the classic. Once you add that sugar, however, you need acid, because even though tomatoes are plenty acidic, they can’t counter all that sugar. I tried lemon juice, vinegar and finally lime, deciding that I liked the last best. This made me want to include ginger, which I believe is not paired with tomatoes frequently enough anyway. From there it was a simple enough step to include the remaining spices. […] The mixture was pretty much as I wanted it, except for bite. A minced jalapeño took care of that.

Thank you, Tanna!! Ketchup has long been on our list of things to make.

I also oven-dried some of the Ontario tomatoes I got. I might not have done enough though. The really good tomatoes from the market are pretty much done now and our jar of dried tomatoes is disappearing far too quickly!! Oh oh… 1 response to “This tomato chutney is sweeeeeeeeeet!!”