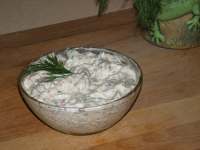 When I make tartare sauce, I like to include fresh herbs if we have them.

But this is winter and while storebought herbs aren’t bad, they are on the expensive side, especially when you consider their slightly faded hothouse taste. We usually buy just one kind per week to stick into a little jar or vase placed on the counter. (You might have noticed the herb vases in some of the photos.) The parsley from the week before last was just too sorry looking to be added to the tartare sauce and out it went to the compost bin.

As soon as I get them home from the store, I wash the herbs, trim the stems and stick them in water. And then I change the water daily to keep the herbs as fresh as possible.

Dill (Anethum graveolens) is really beautiful with its lacy foliage. I love the taste. It’s great in tomato sandwiches and on steamed green beans (we had some with last night’s dinner) And did I mention that it is an essential ingredient in tartare sauce?

Now I like to put tarragon and parsley in tartare sauce. But what I really like to include is dill. Not just the dillweed (as the leaves are often called) itself but chopped dill pickles as well.

And capers. And pimento stuffed cocktail olives. And garlic. And onions. And good mayonnaise. And grainy mustard. And this most recent batch of tartare sauce had a couple of chopped piri-piri stuffed green olives. That’s what I really love about making my own tartare sauce. It is always a little different. It always tastes better than any commercially made tartare sauce. 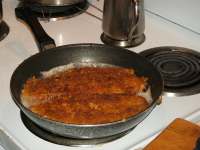 And why this sudden need for tartare sauce? To go with the fried fish we had last Friday (so THAT’S why it’s called Friday! …errr… Sorry about that. I won’t let that happen again.)

Off-topic:
Disaster averted! I just put Sher’s (What Did You Eat?) Sweet Potato Cornbread into the oven. It calls for a cup of flour. I decided to use ¾ c allpurpose and ¼ c wholewheat. No problem with that. But using the ½ c measure, I counted out 1… 2… 3… with the allpurpose flour as I dumped it into the wet ingredient bowl. And then as I was happily counting 1… for the wholewheat flour, I realized my mistake. With a dessert spoon, I carefully pulled out a cup of flour from the top. I cannot believe that I managed to get it out cleanly! That was close!!!