summary: recipe for Tartine Bread; 3rd try is the charm; only major change was to use Jane Mason’s starter; how freeing it is to not have anything to toss away; too many pictures to choose from; joys of having happy pets;

(edited 24 September 2017 to add the missing water measurement in the recipe Duh!!!)

After the recent successes with natural yeast (it turns out that even I, a repeat offender of saccharomycicide (2008, 2012), can be remediated!), I decided to try Tartine Bread again. But with Jane Mason’s starter. 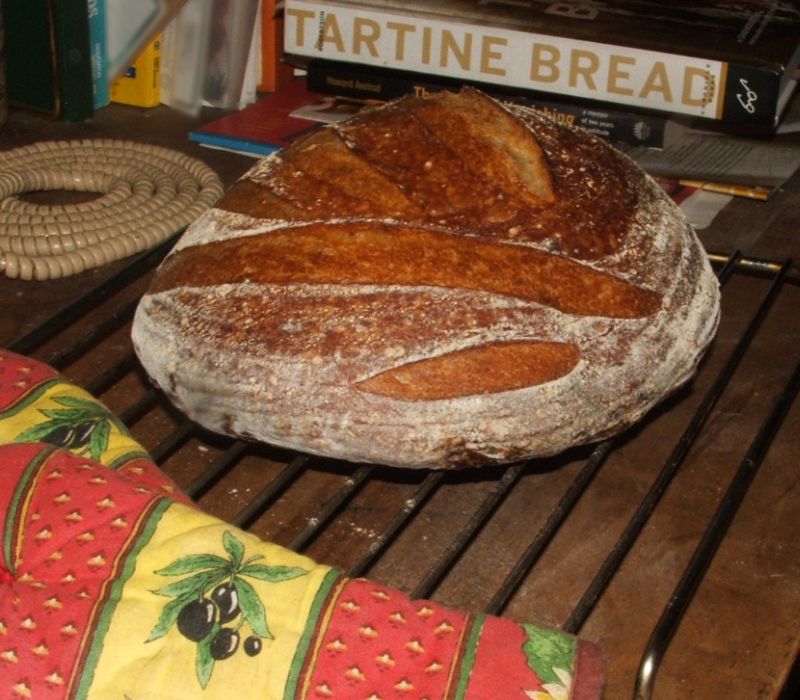 Here. Let’s contrast and compare the Robertson’s and Mason’s methods of creating and using a natural starter:

Developing a starter begins with making a culture. A culture is created when flour and water are combined, and the microorganisms–wild yeast and bacteria present in the flour, in the air, and on the baker’s hands–begin to ferment spontaneously. […] Mix 5 pounds of bread flour–half white and half whole wheat. […] Fill a small, clear blowl halfway with lukewarm water. Add a handful of the 50/50 flour blend to the water and mix with your hands to achieve the consistency of a thick batter with no lumps. […] Cover the bowl with a kitchen towel and place in a cool, shaded spot for 2 to 3 days. […] After 2 or 3 days, check the culture to see if any bubbles have formed around the sides and on the surface. […] To feed the culture, discard about 80 percent of it. Replace the discarded portion with equal amounts of water and the 50/50 flour blend. Mix to combine just as you did in step 1. You have now begun training your culture into a starter.
Repeat the discarding and feeding process once every 24 hours at the about the same time each day […]
When your starter is rising and falling in a perdictable manner, you are now ready to make bread. […] The night before you plan to mix the dough, discard all but 1 tablespoon of the mature starter […]

-Chad Robertston, Basic Country Bread, Tartine Bread, p45,46,47
Making your own WHEAT sourdough starter
Day One Mix 50g/6 tablespoons white or wholemeal/wholewheat flour and 50g/3 1/2 tablespoons water together in a big bowl. Cover and leave on the counter for 24 hours.

Day Five You starter should be bubbly. Congratulations! If your starter is not bubbly by the morning of Day Five, don’t add any more flour, just cover it and let it sit for another 24 hours. If nothing has happened by then, your house could be too clean. Seriously! Stop using bleach or other antiseptic sprays on every surface. Revert to hot, soapy water to clean surfaces. You need germs and so does your sourdough!
[…]
If you run out or if you kill [your starter], it is not the end of the world. You can make more in 5 days.

-Jane Mason, All You Knead is Bread, p45,46
Sourdough baking seems to have acquired a mystique […] [D]on’t worry—there is no one right way. […]
It takes between 4 and 24 hours to refresh a dormant sourdough starter, depending on how long it has been sleeping. You will know the starter is refreshed when it is lively, bubbly, and sweet smelling. […]
The starter gets weaker as it gets older. This is because you have an increasingly large amount of starter to which you are adding a relatively small amount of new food. The yeast eats the new food in record time (you will see it froth almost instantly then an hour later it’s calm again) and goes to sleep. Sleepy yeast does not make great bread, which is why some methods tell you to throw half your starter away on a regular basis. I’m against this method because I don’t believe in wasting food. […]
To refresh the starter when you need it, simply follow the instructions in the recipe. The recipes in this book assume you will store your starter in the refrigerator and that it will need refreshing. To that end they build in refreshment time and you get used to planning this in advance.

My reasoning: It couldn’t possibly be overly sour now that I’m armed with new knowledge. Could it?? 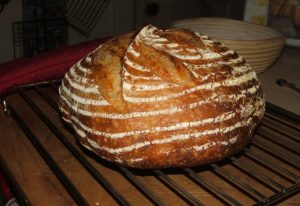 Taking a deep breath to re-read Robertson’s 26 page recipe (and you thought I was verbose!), I followed (mostly) his instructions to the letter again… and muttered variations of the same words I wrote in 2012:

Why on earth would editors allow the first basic recipe (a recipe that is used throughout the book for the other bread recipes) to be a meandering 26 pages of prose?

-me, 1st Attempt at Tartine Bread: Looks good, doesn’t it?

Except I’m not very good at listening for the timer bell. The first resting period after mixing the pre-dough (before adding the salt) was closer to an hour than the recommended 40 minutes. Or was it an hour and a half?

Also this time around, there is something I don’t remember happening at all. When folding and turning the dough, it began to feel as if it had been oiled! The dough felt beautifully smooth and silky. It was remarkable.

Shaping was easy. But I’m afraid I skipped the bench rest – I really can’t be expected to remember all of those 26 pages….

So shoot me. If the bread hadn’t turned out so well, I swore that next time, I’d include the bench rest. But, really, I cannot imagine how this loaf could turn out any better! Two times in a row. 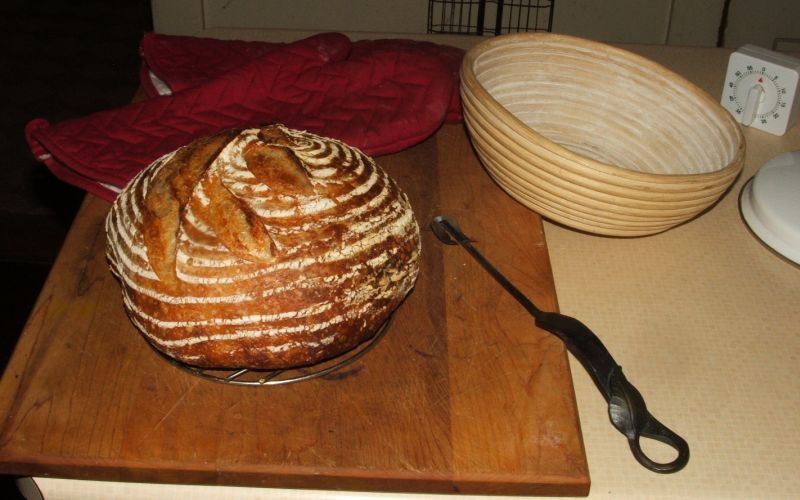 Using the bench knife and one hand, work each piece of dough into a round shape. Tension builds when the dough slightly anchors to the work surface while you rotate it. By the end of the shaping, the dough should have a taut, smooth outer surface. You want to develop a strong tension in as few movements as possible—used decisive yet gentle force while handling the dough. If the surface rips, you have gone too far in developing tension. Don’t worry if it does rip—this is just an indication you should stop shaping and let the dough relax.

7) After this initial shaping, let both rounds of dough rest on the work surface for 20 to 30 minutes. This stage is called the bench rest. Make sure the dough is not exposed to drafts, which will cool it too much. […] During the bench rest, each round will relax and spread into a thick pancake shape. The edge around the circumference should appear fat and round, not flat and tapered or “dripping” off the edge. If […] the dough is spreading too much, these are indications that the dough did not develop enough tension during the bulk fermentation. To correct this, simply shape each round a second time.

Hmmmm, maybe I’ll try applying a bench rest next time after all….

Below is the second recent success making Tartine bread this year. The ears from the scoring aren’t quite as dramatic as on the first loaf, but they’re still thrilling to see. 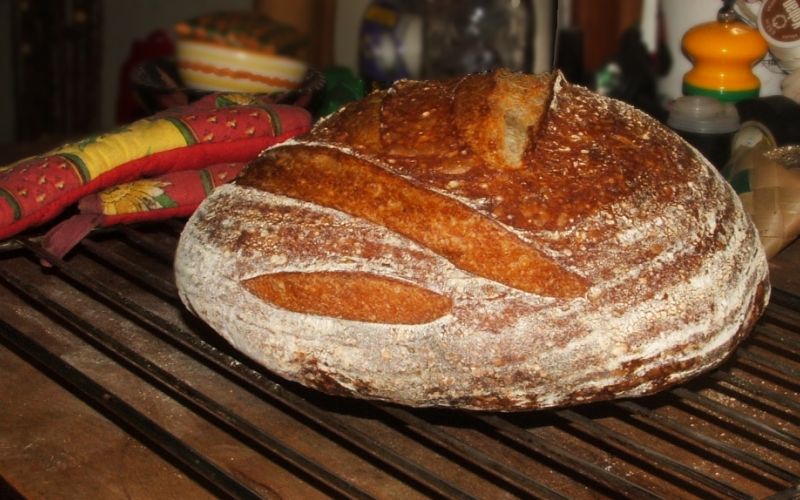 Sift the whole-wheat flour into the mixing bowl. (Set the bran aside for another use – put it into granola, or biscuits….) Replace the missing bran with wheat germ. 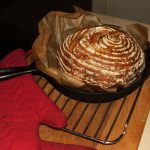 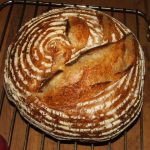 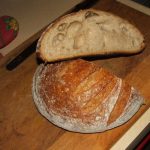 There are so many things about this bread to be thrilled about! The oven spring. The shiny holes in the crumb. But most of all, the complete lack of sour flavour. At last!

Ha. There were so many beautiful photos that I couldn’t decide which ones to include and which ones to omit. So I have included the all! (Too bad we forgot to take a photo of the bread just before it went into the oven. Both times, it was flat as a pancake and easily tripled – almost quadrupled – in height, during the first 30 minutes of baking.) 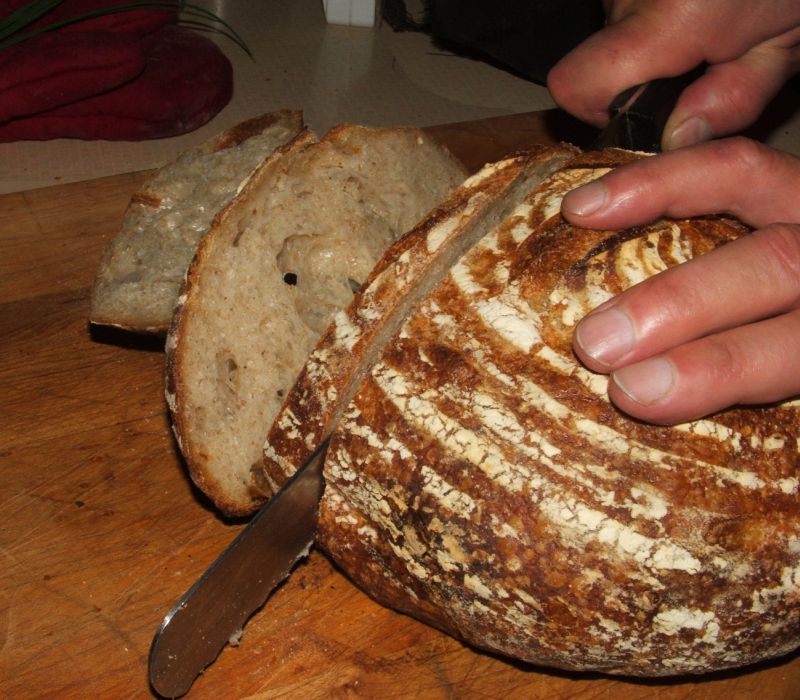 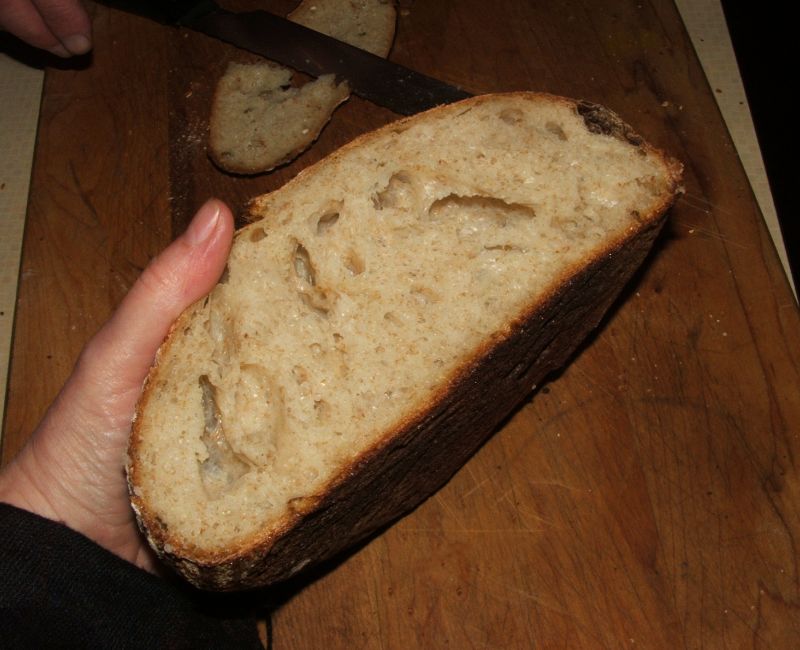 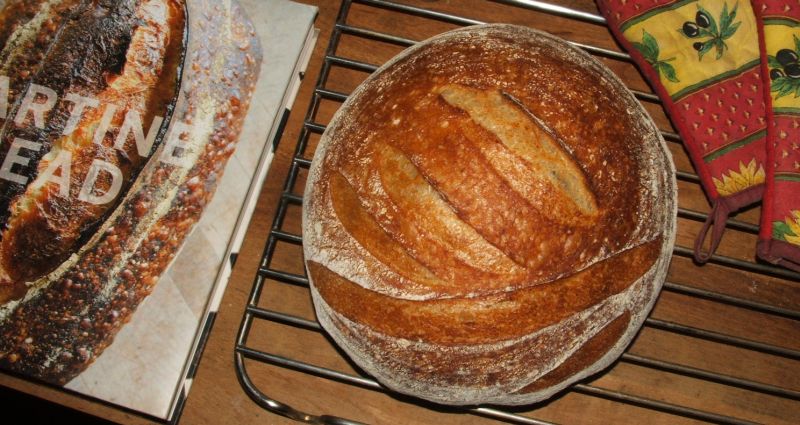 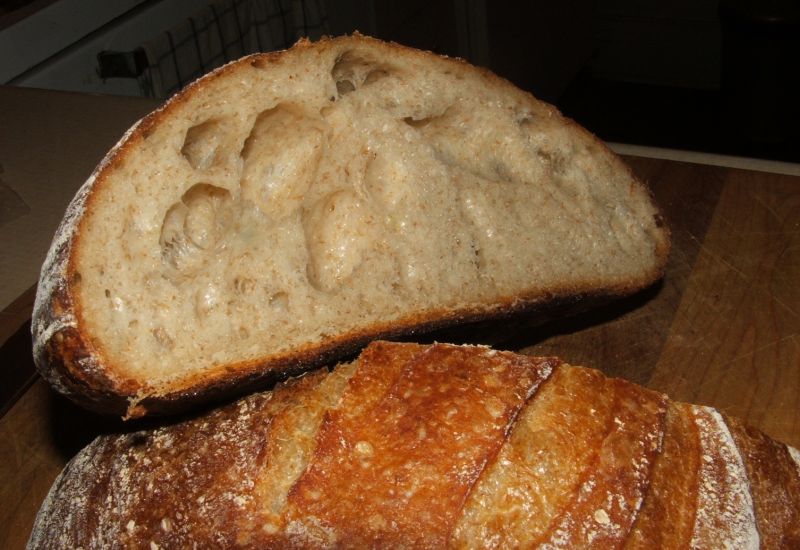 The other day, our brilliant neighbour handed her mother’s large Le Creuset casserole dish over the fence, saying that we could have it on almost permanent loan because they already had one just like it.

So. Next time, I’ll try baking two loaves. It will be interesting to see what, if any difference, there is between Le Creuset and stainless steel bowl hat baking. 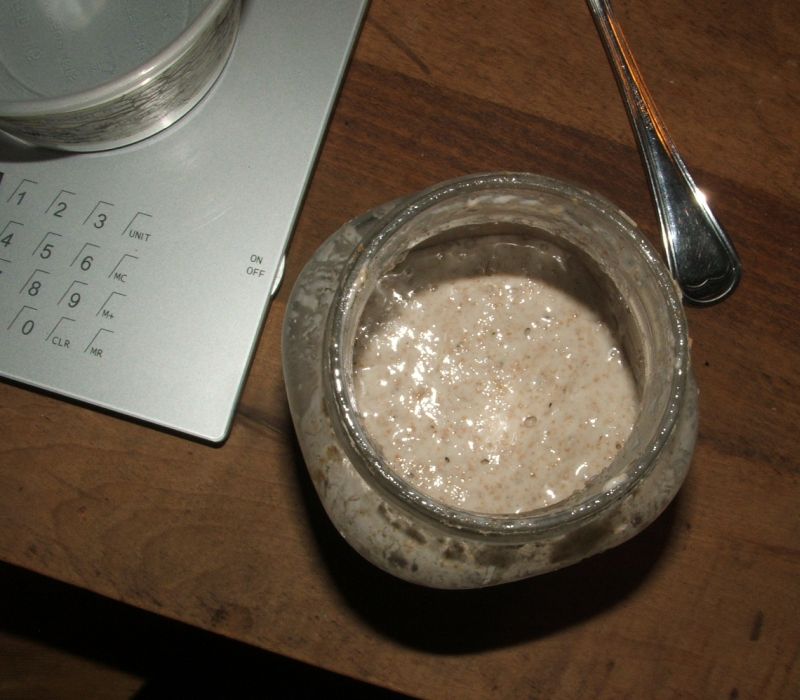 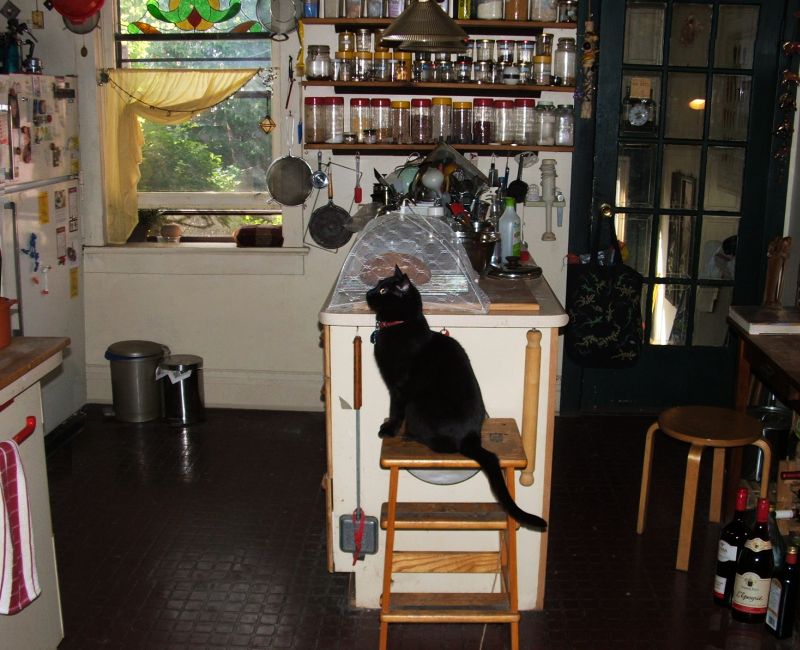 How lovely that all the pets in our kitchen are so well behaved.