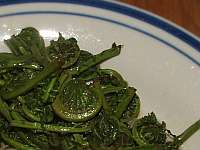 It wasn’t until about five years ago that I first tasted fiddleheads. They appeared in the vegetable section of the supermarket around this time of year, labelled as being from somewhere in the Maritimes.

They looked so cute – like little green wheels. Like little green wheels that had been rolling over a sunbaked back-country road…. Yes, indeed. Like asparagus, they can be pretty gritty. So gritty that when I filled out the 100 Canadian Foods to Consume meme, I wrote the following about fiddleheads:

I love fiddleheads – the only thing wrong with them is that it is very very difficult to get the sand out.

So when our friend, who lives north of the city, handed me a bag of fiddleheads she had gathered on her farm that morning, I asked her how long we should soak them to get rid of the sand. Her reply: “There isn’t really any sand. We picked them from an area of the property that isn’t sandy; just give them a good rinse before steaming them.”

No sand? Really? While our friend is one of the most truthful people I know and hasn’t led us astray yet, I still had my doubts.

But we (mostly) followed her advice anyway. We rinsed them really well and then (because we just couldn’t believe there wasn’t some sand lurking inside the tightly curled greens) we left them soaking in a big bowl of water for about 20 minutes. Then we steamed them for a few moments, drizzled on a little butter then squeezed a quarter of a lemon and a few sprinkles of seasalt overtop.

They were brilliant!! And our friend was right. Not a trace of sand or grittiness – not in the soaking water; not in any of the fiddleheads.

And the flavour!! Fresh and green and springlike and delicate. And no sign of slippery sliminess on the edges.

What a difference a few (more??) days in a truck makes to fiddleheads! Now that we’ve tasted freshly picked fiddleheads, we’re unlikely to go back to getting the trucked-in sand-ridden fiddleheads sold at the supermarket. 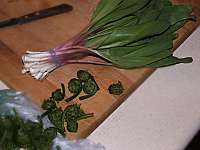 Included with the bag of fiddleheads was a bunch of wild leeks and a dozen farm fresh eggs. Fiddleheads, giant brown eggs and wild leeks. What could be more wonderful?

We served the fiddleheads with a grilled porkchop and fresh pasta (made with farm fresh eggs) tossed in olive oil and wild leeks (more about that soon).

edit 9 May 2010: It occurred to me that I should know something more about fiddleheads, which are the young shoots of the Ostrich Fern (Matteuccia struthiopteris)…. Apparently, it is absolutely essential that fiddleheads be cooked (please note that according to Health Canada, only the Ostrich Fern is considered safe for eating; other types of ferns may be toxic or carcinogenic):

Fiddleheads should never be eaten raw. Health Canada and CFIA recommends that fresh fiddleheads be washed several times in fresh cold water. Remove as much of the brown husk as possible from the fiddleheads. They should then be cooked in boiling water for 15 minutes or steamed for 10 to 12 minutes until tender. Water used for boiling or steaming fiddleheads should be discarded as it may contain the toxin. Fiddleheads should also be boiled or steamed prior to sautéing, frying or baking. […] There have been no reported cases of illness connected with eating fully cooked fiddleheads.

For more information on food safety tips and fiddleheads from Health Canada, please read the following:

I have to confess that while we did wash the fiddleheads well, we did NOT cook them for even close to 15 minutes… It didn’t even occur to us.

Ha! I see we’re not alone. Take a look at this response from the Maine Sunday Telegram:

“The CDC has never identified a toxin related to fiddlehead consumption,” said Kathy Savoie, extension educator with the University of Maine. “So the recommendation about the 10-minute boil is more about the secondary contamination from eating fiddleheads that may be in a river that has flooded and may have contaminants from wastewater treatment or runoff from agricultural fields.”

Last year, a number of people got sick from eating undercooked or raw fiddleheads, Savoie said.

The idea of boiling fiddleheads for 10 minutes makes a chef’s skin crawl. They argue that boiling for that long will make them mushy and inedible, and that as long as they clean and prepare the fiddleheads properly, diners have nothing to worry about.

Jeffrey Savage, executive chef at On the Marsh Bistro in Kennebunk, ranks the 10-minute boil with the current obsession with hand sanitizers. 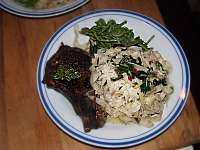 edit 10 May 2010: We just got back from the supermarket (we were buying milk and flour). There, we saw rather sorry looking fiddleheads from somewhere in the USA – priced at $4.49 per pound (why they are selling things by the pound rather than the kilo, I can’t begin to understand). The other things I don’t understand are 1.) why the supermarket is selling fiddleheads from the USA instead of Ontario and 2.) why anyone would pay such an exorbitant price for fiddleheads that are flecked with brown and probably incredibly sandy.

2 responses to “the beauty of local fiddleheads”