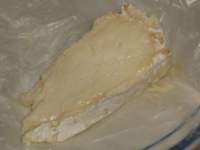 Doesn’t this cheese look fabulous? And aren’t you just dying to try it? We were too when we saw it at St. Lawrence Market this past Saturday.

We had made a special trip there just to get cheese from the north side of the Market. We stopped at our favourite cheese seller Monforte to get some of their Serenity (a camembert-like cheese made from raw sheep’s milk that is sublime) but they didn’t have any soft cheeses at all that were ready.

But a couple of weeks ago we had noticed that there is another cheesemaker who was selling raw sheep’s milk cheeses and her “ramembert” had looked divine. You know how great camembert looks when it’s ready to eat… how it oozes across the plate. However, this past weekend, none of her pieces of “ramembert” were quite at that stage. But we bought this one anyway, thinking we’d let it go until it did start to ooze.

She had a smaller round, completely enclosed, that she said was ready to go now. “Must be eaten”. It looked beautiful! (Sorry no photo of that one…)

Even though we were keeping the ramembert for later, we had to try a little first, along with the other one – just to compare them. The results of our taste test:

Aroma: Eeeeeew!!! But that’s okay. Some of the stinkiest cheeses have the best flavour!

Texture: Eeeeeew!!! Grainy. Completely hard and dense inside. Oozing just a little on the edges.

Flavour: Eeeeeew!!! Worse that the smell!! Worse than the texture. This is bad cheese at its worst. Ammonia-like, bitter, with the distinct aftertaste (that goes on forever) of long overstewed cauliflower… It broke our hearts but out it went into the wet garbage in the green bin! (We were so mad that we didn’t even think of getting the camera.)

Ramembert (Keep for a few days to let it soften)

Aroma: Eeeeeew!!! Once again; that’s okay. Think of how great Epoisse is! And that’s so stinky that apparently there is a bylaw in Paris forbidding people to travel by Metro if they are carrying an Epoisse.

Flavour: Eeeeeew!!! Much worse that the smell!! This is bad cheese at its very worst. There it was with its terrific texture, mocking us. It was almost taste-free. Except that there was that tast of Ammonia again, along with the bitter, even longer overstewed over-ripened cauliflower left on the counter (covered) to fester… I think you get the picture.

Yes, indeed. This cheese stands alone. Or rather, lies not quite alone in the green bin, waiting to picked up by the city on Wednesday to be turned into compost. Because that’s all it’s fit for.

That’s it. Even though we want to support the local artisanal cheese-makers, we’re NEVER buying any cheese from anyone if we can’t taste it first. (And there’s no way we’ll ever buy anything from that particular cheese stall again, unless someone tells us that we missed a truly excellent cheese the lady makes that we HAVE to try.)

I didn’t know about Haalo’s (Cook almost anything at least once) Say Cheese event until the deadline was past. And of course, I would NOT have featured either of these cheeses. I would be more likely to choose “Beemster”, an aged Gouda from Holland that we have been savouring. It has those wonderful little shards of caramel that aged hard cheeses get. (Photo?!! You want a photo of it?? Sorry, I got so distracted by the other stinky cheese that I forgot to take of photo of the Beemster. Remind me. Because we’ll definitely be buying more Beemster! And we’ll be getting more of the Monforte Dairy Company’s Serenity (Camembert) too. It’s stellar!)

Just curious, are we the only ones who think that St.Lawrence Market is grossly over-priced?

5 responses to “The Cheese Stands Alone”