summary: We make the best Carrot Cake with so much cream cheese icing, it will make you sick; Happy Birthday, T! (click on image(s) to see larger views and more photos)

T’s birthday is in early January. We’re always so full from Christmas that he always defers his cake until later. The other day, he said, “Isn’t it time for my birthday cake?” 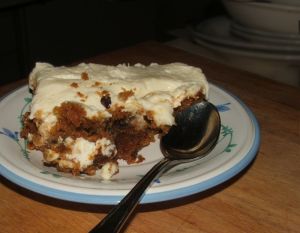 As always, the kind of cake was left to him. I was surprised when he didn’t choose Black Forest cake and instead decreed that it would be carrot cake. Yes!! J’adore carrot cake!

And good for you! Think of all the vitamins!

The practice of combining cheese, fruit, and nuts dates back to ancient times. These were often served at the end of a meal because they were thought to aid in digestion.

Hmmm, do you think the ancients meant cream cheese? And if some vegetables are added, will it be even better for the digestion?

I don’t remember how it was that I tasted R’s cake all those years ago. But I do remember asking her for her recipe. She readily agreed and grabbing a pen and ripped a piece of paper out of a notebook and began to write it out. As now, she was on a major health kick, often using whole wheat flour and substituting honey for sugar. 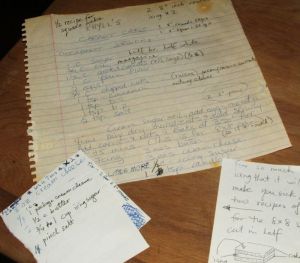 I’ve made this carrot cake on many occasions. And every time, just like that first time I tasted R’s carrot cake, everyone has exclaimed that it’s the best carrot cake they’ve ever tasted.

Forget the travesties that are sold in various restaurants and bakeries. R’s carrot cake is the real thing.

This time round, in my haste, I used all white sugar, rather than adding a half and half blend of white and dark brown sugar I normally do. For the fruit and nuts, I added even amounts of pecans, Thompson raisins and currants. As I stirred everything together, the batter seemed a little thick, so I grated in a little more carrot.

Also, please note that in spite of the fact that I have a pencilled note to use margarine rather than oil, it has been eons since we’ve even had margarine in the house. I used sunflower oil.

And speaking of sunflower oil, I was a little too liberal when I was oiling the pyrex dish. We haven’t had any paper towels for a while (Blynken the furry black fiend likes to unravel them and tear them to shreds) so I used my fingers to try to pull out the extra. But there was still a LOT of oil. Is this one of the reasons that this particular carrot cake was so spectacular?

Maybe. But we’ve talked about it and a carrot cake is really only as good as its icing. It has to be cream cheese icing too. With enough cream cheese that the icing has a bit of a tang.

Cream Cheese Icing
for so much cream cheese icing on an 8×8 cake, it will make you sick

:: Soften the butter and cream cheese by leaving them overnight in the oven with only the light turned on. Remove them from their packages first….

:: We’ve often omitted the vanilla entirely and the icing has still been good. But the amount I added this time simply rounded out the icing. When I tasted it, I would not have been able to say that vanilla had been added but known that there was a certain something else there enhancing the flavour.

As T was savouring the last bite of cake on his plate, with the knowledge that there would still be cake left for the next night, he sighed happily. And then said, “When this is finished, will you make me another carrot cake?”

It really is awfully good. And I did make just half the recipe.

Yes. Of course! Life won’t feel complete if there’s half a recipe unmade…. 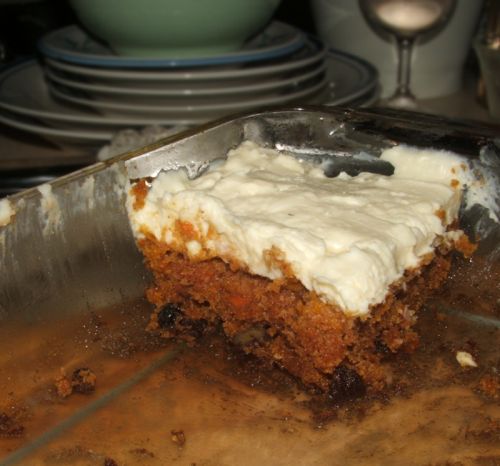 Vegetables are a must on a diet. I suggest carrot cake

– Jim Davis, Garfield’s Guide to Everything

2 responses to “this IS the best carrot cake”