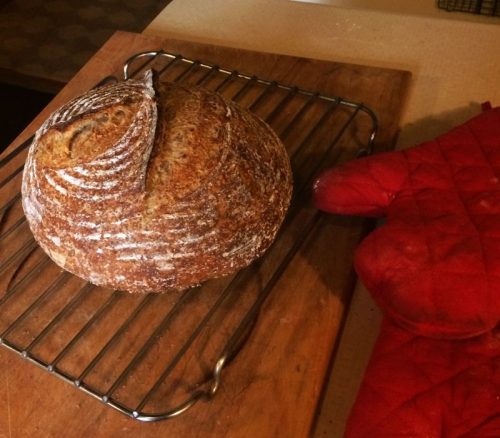 Today I made my best ever bread. Whole wheat and oats.
Effortlessly light
What I have always wanted to make.
[…]
POOF! in the oven. I have never seen oven spring before.

How cool is that?!

When I saw Gordon’s message, I’d just finished reading “Artisan Sourdough” by Casper André Lugg and Martin Ivar Hveem Fjeld and had already decided I neeeeeeeded to try their toasted oatmeal bread recipe soon. They toast rolled oats in a single layer on a baking tray for about 10 minutes at 350F and then soak the oats overnight in water before adding them to the dough made with whole-grain spelt and white wheat flours. 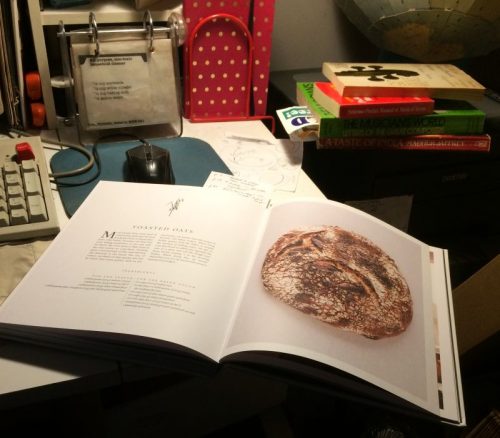 Most people have some kind of relationship with oats, because few grains have such character. […] [H]owever, oat flour has poor baking properties, so we only add for flavor. We toast them in flake form in the oven before we soak them. Toasting gives a wonderfully earthy and full-bodied character to the bread.

Now I could not wait to make oatmeal bread!

Gordon’s recipe does not call for toasting the rolled oats first; he scalds them with boiling water and leaves them to soak. Also, his recipe calls for using commercial yeast.

knead everything together around 20 minutes (I count to 1200)

While you are kneading cut
3 Tbsp butter into the dough gradually
[…]
[A] decoration with rolled oats and a dash of milk [is] good. Slash loaves and bake 50 minutes or so at 350 degrees.

We do have commercial yeast in the fridge, but its due date is 20 September 2020. Ooops.

The Lugg/Fjeld recipe does NOT call for commercial yeast – of course it doesn’t if it is included in a book entitled “Artisan Sourdough”!

Initially, I was going to alter Gordon’s recipe to use our Jane Mason whole wheat starter. Then, waffling, I scrawled down the ingredients list in “Artisan Sourdough”. Aha. No sugar. No butter.

Feed with white bread flour? Oh oh…. Our Jane Mason starter is a finicky eater and doesn’t like eating anything but 100% whole wheat flour. Noting that the Ludd/Fjeld recipe calls spelt flour (that we don’t have), as well as 100 grams leavener, and 500 grams flour in the actual dough, I reconsidered. I would just use our Tartine recipe (that calls for the same amount of leavener, flour, and salt). I would just add toasted rolled oats to it.

What could go wrong?

The afternoon before making this fabulous bread, I poured 100 grams steel cut rolled oats into our cast iron frying pan and put it over medium high heat, stirring with a wooden spoon from time to time. We guessed it might take 10 minutes to toast the oats. It took about 7 minutes. They smelled wonderful.

That night after dinner, I mixed together 20 grams (or so) Jane Mason starter, 50 grams 100% whole wheat flour, and 50 grams water in a bowl to cover and leave in the oven overnight. At the same time, I poured the toasted rolled oats into another bowl and covered them with 100 grams water.

The next morning, I mixed the dough, carefully subtracting 100 grams of water from our usual recipe. Did I note how much water Ludd and Fjeld say to add to the bread dough itself? Of course not!

We like to coat this bread in rolled oats. Sprinkle the oats on a plate and roll the dough over them before putting it in the proofing basket. When doing this, we recommend that you cut the bread with scissors instead of scoring it. […] Add the toasted and soaked oats when adding the salt

Did I remember that Ludd and Fjeld say to add the oats at the same time as the salt? Pffffft!! Why would I do that?!

Happily, I now know that if bread dough seems a little dry (or a lot dry as this did), I just add more water. To the 225 grams already in the bowl, I added another 75 grams. It was still pretty stiff but at least all the flour was mixed in. I added another 25 grams when squelching in the salt.

On the next stretch and fold, I sloshed in another small(ish) glug of water. How much?? I have no idea.

The dough was still pretty stiff. I remembered Gordon’s tip to wet your hands when kneading. On the next stretch and fold, I sloshed in even more water.

I’m guessing that I ended up adding the amount that Ludd and Fjeld suggest…..

Every time I took the plate off the bowl, the amazing aroma of toasted rolled oats filled the air. Intoxicating! It couldn’t be anything but delicious.

But the bread took ages to rise. Perhaps it was because of the now cold kitchen. It’s November, after all.

Or perhaps it was taking cues from the extremely sluggish commercially yeasted pizza dough that T had made for dinner. This is how we discovered out that our commercial yeast has expired….

But both doughs did finally rise (the pizza dough was not a stellar riser though – good thing pizza crust is supposed to be flat) and pre-shaping, then shaping the bread was a breeze. I did NOT remember to add more oatmeal to the top. Next time. Maybe.

It was pretty late when we were finally able to bake the bread: I pulled it out of the oven around 10pm. But who cares how long it took to rise? LOOK at that oven pop! Zowie! 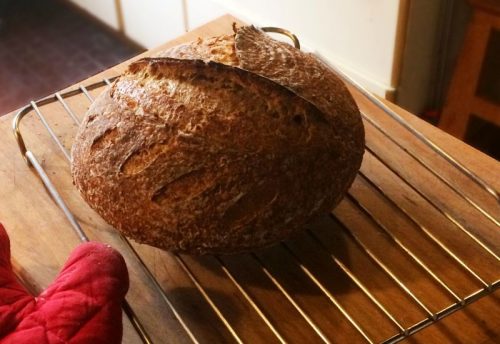 The next morning we sliced it open to taste it. 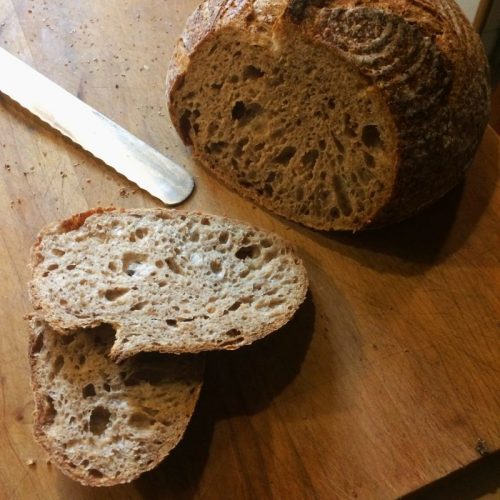 Thank you for the inspiration, Gordon!

What to do with slightly dry cubes of leftover bread

We have lots of Emmental from the Cheese Boutique, and white wine from making Gran’s chicken the other night. Guess what we’re having on Monday night when there is a chance of (eeeeeek!!) flurries? What could be better?

(How is it that I haven’t raved here about my grandmother-in-law’s chicken? Remind me. It’s The Best Chicken – especially if it’s made with thighs instead of breasts the way she did.)