We recently got back from a trip to the west coast, where we visited family, celebrated several birthdays, ate too much, played games and generally had a wonderful time. (We need a holiday now though…

And of course, I had to show off my wild bread!! I made two loaves to take with us (froze them before leaving so they were still viable when we arrived). Shortly before leaving, it suddenly occurred to me to ask around about how to travel with my starter now that air traffic regulations require that the starter be placed in luggage going in the hold. (Even if I COULD take it on board, can you imagine the nightmare scenario trying to explain that the bubbling mass in the jar is supposed to be bubbling like that and it’s for making bread? Oh yeah. Right. I don’t think so… I really don’t relish the idea of being escorted away to have the opportunity to wear stripes and teach fellow inmates how to make wild bread…)

Before we left, I found very little about how to do this (aside from one nightmare account of a starter lost by the airline!!) So I blundered my way through, feeding it the night before we left so it would be nice and cold when I put it in my luggage the next morning. 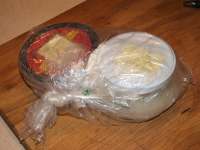 I packed a little container of unbleached flour because I didn’t know if everyone would have unbleached flour then double-bagged the starter (in a zip lock bag inside a plastic bag knotted at the top), crossed my fingers and off we went: an hour bus ride to the airport, an hour waiting for the plane to take off, about 4 hours in the air, a couple of hours deplaning, getting luggage and taking the skytrain to the station closest to my sister and brother-in-law’s place near Vancouver. And directly after the happy greetings to the various family members crowded around the door, I raced into their shiny new kitchen to see how my starter had fared.

Good thing I double bagged it!!

I really should have taken pictures of it; a thousand words will have to suffice instead. The starter had oozed out of its jar, burst through the zip lock and completely covered the inside of the knotted bag. It was quite liquid. I scraped two tablespoons out of the bag and put it into a little bowl to immediately feed it. The next day I started building it up so I could make sourdough bread to take over to Victoria a couple of days later.

The bread turned out fabulously!! (again, no photos… silly me… but really I was far too busy hitting pinatas, eating birthday feasts, going for walks, playing games, etc. etc.) When it was time for us to move on, I left one of the new loaves there and took one new loaf and one frozen Toronto loaf for the next set of birthday parties on Vancouver Island.

Two of my siblings-in-law took some of my wild yeast and I already have reports of successful bread-making there. It would be really interesting to taste their sourdough bread in a couple of months to see how much different it is because of different flour, air, water being used to feed the starter!

But I’m getting off-track (so what else is new?)… While we were away, I took a few moments each day to check email on borrowed computers. There was one from Rachel Y, who had seen my question about travelling with a natural starter in A Year on Bread (or was it at Wild Yeast that she saw the question??) Whichever it was, she kindly answered to say:

[…] I mixed extra flour into the starter so it was more like dough than liquid. I put a small amount in an airtight container and put that container in a plastic bag. Which was a good thing because the container opened when the starter expanded. Next time I will use a larger container. […] 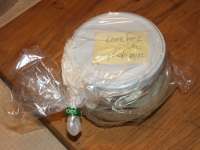 Taking a leaf from Rachel’s book, I added extra flour when feeding the starter just before leaving for the Victoria airport. I had lost the hightech replacement ziplock bag that my sister kindly gave me (how can one LOSE a ziplock bag in a refrigerator??) so tightly tied the closing of the plastic bag and placed it into another tightly closed bag. 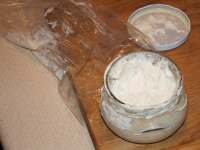 And here is what the starter looked like when we arrived home. As you can see it still managed to escape but not quite so spectacularly as on the outward journey.

Was it worth the effort? Absolutely!! Even though it would be so much easier if we could turn back time so that I could have just taken the starter in my onboard hand baggage.

(Remind me to brag about making wild naan while we were in Vancouver!! Remind me not to cry and moan about the disastrous wild focaccia I made in Victoria. Heh. You win some. You lose some.)

edit: listen to a CBC podcast of Stuart McLean reading his story, Sourdough: “Dave agrees to babysit a sourdough bread starter that belongs to his neighbour”.

2 responses to “travelling with wild yeast”