With the buildup that we were given of Luxardo cherries, we were expecting great things! 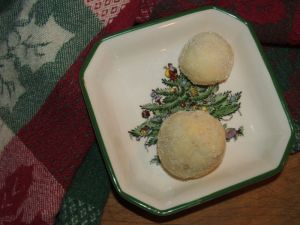 I’ve mentioned in the past how much I love SAVEUR Magazine….

Last September, I noticed an announcement on the SAVEUR Facebook page that they were looking for Reader Submitted stories and recipes for their December issue. I submitted three stories, including the story about the cherry snowballs, laboriously shaving each story down to 200 words. This was no mean feat for me, what with my second name being “Verbosity”!

And then I completely forgot about them.

So imagine how thrilled I was in the middle of October to receive the following in an email from SAVEUR’s senior editor Tejal Rao.

Thanks so much for sharing your mother's lovely recipe with Saveur.

We'll be including it in our December issue and I wanted to talk about the column a little with you. Let me know when you have a moment to chat!

I was so excited. To add to the thrill, Tejal phoned me the next day for a clarification of the recipe. We had a delightful conversation, in which she told me that the SAVEUR kitchen had made several versions of Mum’s cherry snowballs and the ones they liked best were those made with Luxardo cherries. She asked if I was familiar with them. 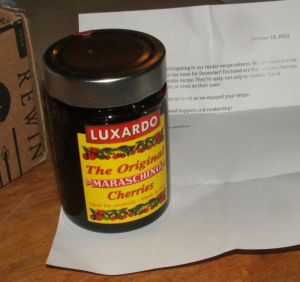 Just the name shrieks “expensive”. But I assured Tejal that I was pretty sure that I’d be able to find them somewhere in Toronto. Just as Tejal was about to hang up, she said she’d send me a URL for where I could order the cherries. And then a few moments later, came a request for my address. The SAVEUR kitchen wanted to send me some of the cherries!!

The cherries arrived, the package smelling of sugar and that almondy scent of Maraschino cherries. I put the jar away until it was time to make the snowballs.

Then on 12 November 2013, my copy of the December issue of SAVEUR arrived! I quickly riffled through the pages to see my name in lights. 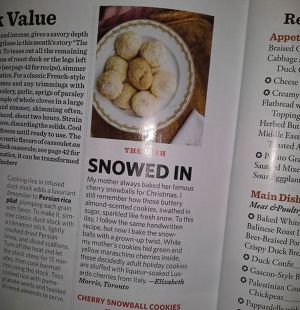 And I was SO disappointed! Of course, I knew that editors might change a few of my words and cut the story back. But I didn’t expect them to change EVERY WORD except for three. The essence of my story was completely gone and replaced with the thoughts and experiences of someone else entirely.

The recipe was also drastically changed. Naturally, I did know about one of those changes after my phone conversation about it with Tejal. Sadly, she didn’t mention the other changes to the recipe or that my story would not be used.

Here is the 79 word version that the SAVEUR editors wrote:

My mother always baked her famous cherry snowballs for Christmas. I still remember how those buttery almond-scented cookies, swathed in sugar, sparkled like fresh snow. To this day, I follow the same handwritten recipe, but now I bake the snowballs with a grown-up twist. While my mother’s cookies hid green and yellow maraschino cherries inside, these decidedly adult holiday cookies are stuffed with liqueur-soaked Luxardo cherries from Italy.

– SAVEUR editors pretending to be me

And then I read the recipe that SAVEUR published, pretending that it was my writing! No wonder they thought the cookies were almond scented! They substituted almond paste for the ground almonds. They also added baking powder and an egg! Are they crazy? Those aren’t Mum’s cherry snowballs!

Of course I do understand that space restrictions require that the story be truncated. The false story “with a grown-up twist” has 68 words and a very large heading. Here is the sort of thing I expected to see:

Even if I had seen the following, implying that I use Luxardo cherries in my mother’s cookies, I wouldn’t have minded so much:

Here is what I submitted to SAVEUR:

It was a pretty well known fact that I hated the cherries. It was an equally well known fact that I loved the cookie part of cherry snowballs. And so one day in late December, when I was about 10, Mum came to me with a stern look on her face, holding out a large handful of Maraschino cherries with tell-tale crumbs of cookie attached, “Look what I found.”

I denied all knowledge.

Year after year, the story was trotted out whenever cherry snowballs were served. Guests heard of my alleged crime. Year after year, I protested that it wasn’t me. Everyone laughed, saying that it was probably okay to admit it now.

And they were right. One Boxing Day, at a party years later, came the laughing words “that was me!!” from one of my sister’s friends.

1. Cream butter, icing sugar, vanilla and salt together.
2. Add flour and mix well.
3. Add ground almonds, mixing well again. (Let your hands be your friends.)
4. Put a dried cherry in the center of a smallish amount of dough. Roll into a small ball shape (about an inch in diameter) and place on an ungreased cookie sheet. Repeat with the rest of the dough and cherries, leaving a space between each ball.
5. Bake for 10-15 minutes at 350F or until light golden.
6. Roll the hot “snowballs” in granulated sugar. Allow to cool completely before storing in airtight containers. These keep for several weeks.

The cherry snowballs recipe is from a hand-written card in Mum’s recipe box.

I cannot believe the SAVEUR kitchen thinks that almond paste is a viable substitute for ground almonds. I can’t help suspecting that one of the reasons they chose Mum’s recipe was so they could flog the fancy cherries – which they think are laced with liqueur make Mum’s cookies into “decidedly adult holiday cookies”. They had the nerve to imply that I wrote “I bake the snowballs with a grownup twist”. I am horrified that my name is attached to this article! Who makes Christmas cookies that are for adults only? That’s just mean!

The liqueur that Luxardo makes with the cherries is merely mentioned on the label:

Candied cherries with Mascara syrup, a fruit cultivated and processed by Luxardo for distilling its renowned Maraschino Liqueur

Granted, the cherries do taste better than regular Maraschino cherries. In fact, they taste WAY better. 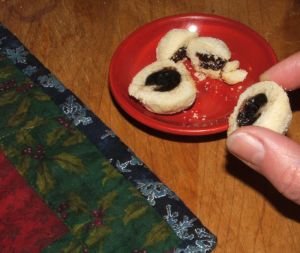 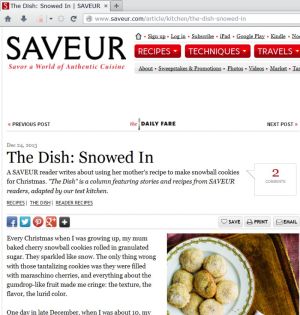 There’s a happy ending to the whole saga. After I wrote to Tejal at SAVEUR to express my dismay and displeasure, she telephoned almost immediately to apologize profusely. And then a couple of weeks later, she emailed to say that SAVEUR wanted to publish my real story. 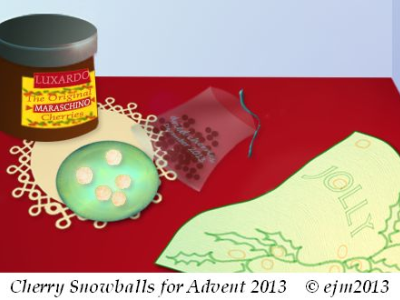