summary: Two Salsas!! recipes for corn and tomatillo salsas based on recipes in “Salsas and Ketchups” by Silvana Franco; information about Hearth ‘n Soul – real food (formerly “Two For Tuesdays!”); (click on images to see larger views and more photos)

I know. It’s not Tuesday. Tuesday was yesterday.* 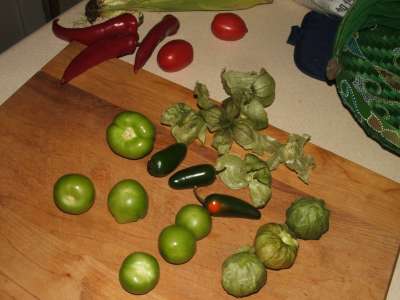 In August, Heather (Girlichef) posted about tomatillo salsa and Carnitas con Verdolagas (aka purslane). At the time, we decided we HAD to try it. And we bicycled to Kensington Market in search of verdolagas and tomatillos. We were SURE we’d find verdolagas. But no. They hadn’t even heard of it. Or we were pronouncing it wrong.

While we were at the market, we couldn’t resist buying some jicama and corn as well.

When we got home, I leafed through our copy of “Salsas and Ketchups” by Silvana Franco to see what she did with tomatillos. And I got completely distracted by the corn salsa on page 118.

Well, not completely. We still made the tomatillo salsa. Because if one salsa is good, two must be better.

For the salsas, T roasted the husked corn directly on the barbecue grill. And he barbecued hot shepherd peppers (not very hot – just a nice little kick), tomatillos and plum tomatoes in our barbecue wok until they had char marks.

Meanwhile (heeheheehehee – I’m lying – I just wanted to say “meanwhile”. He didn’t do the next step until after the vegetables were charred), he fried chopped onions in olive oil til they were soft and starting to turn gold.

He cut the kernels from the cob and put them in a bowl, then chopped the peppers and tomatoes coarsely and added them along with the onions, some lime juice and salt and pepper. He waited til it had cooled before stirring in cilantro.

Fill a baked potato with a spoonful of sour cream and top with this gragrant salsa for a super light lunch. Remember to choose the freshest, juiciest corn cobs. 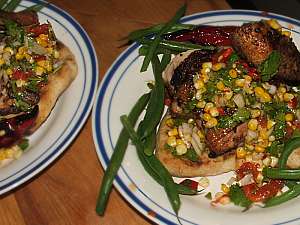 Steamed green beans on the side.

Here’s our version of the recipe for corn salsa we saw when we were looking for the tomatillo salsa recipe, which we ALSO had on the side – I suppose you want that too??

Roasted Corn Salsa
adapted from a recipe in “Salsas and Ketchups” by Silvana Franco (p. 118)

Tomatillo Salsa
loosely based on a recipe in “Salsas and Ketchups” by Silvana Franco (p. 109)

Franco claims that this salsa will keep covered in the refrigerator, for up to 5 days. Ours didn’t last nearly that long. In fact, we didn’t even have any to put into the fridge to see how long it would keep.

This was a stellar dinner! Even though we didn’t manage to get the purslane, we are still most grateful to Heather for her post that pushed us to get the tomatillos.

Oh yes, and the jicama? We mandolined it into shoestrings, added a bit of lime juice and salt and served it as salad. It was delicious too. 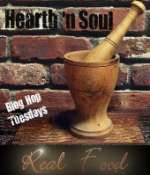 This event was created by Alex (A Moderate Life) with the idea that each “Two for Tuesday” post would contain two things (two recipes, two links, two variations on a theme… as long as the post is about real food. Alex, Heather (girlichef) and two other bloggers have joined forces to co-host. Heather wrote:

-Heather (girlichef), “Extra! Extra! Read all About It! Announcing… TWO for TUESDAYS!”

The “Two for Tuesdays” event has evolved and while it is still virtually the same, it now has a new name, “Hearth ‘n Soul”. I’m a little sorry to see that the “Two” part of the event is finished. I kind of liked the challenge (not to mention the alliteration) of “Two for Tuesdays”.

For links to the other “Hearth ‘n Soul” hosts and complete details on how to participate in the weekly event, please read the following: 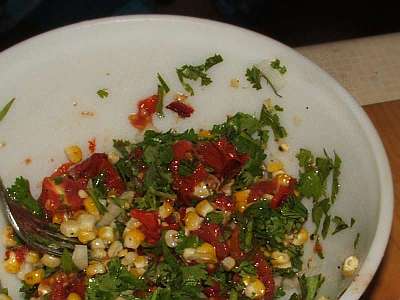 But luckily, with name change, I don’t need to worry. Remarkably, I’m still in time for this week’s posts!

It’s not that we didn’t love it. We did. So much so that we made it again a couple of days later. And if you neeeeeed to make it too and are mourning that corn season is over, please don’t despair. You still might be able to get fresh corn (we did yesterday; it was delicious). And of course, I’m sure frozen corn would work in a pinch.

edit 24 September 2010: I thought I’d google again about purslane and see that it originally comes from India! Now we’ll have to look again in India Town!

Purslane (Portulaca oleracea, Portulacaceae/Caryophyllales) is an annual herb probably native to the Himalayas, but today naturalized in Western Asia and Southern Europe. Although often eaten cooked as a vegetable, the raw leaves and stems have a crispy texture and a salty, fresh taste that makes them a good garnish for Mediterranean cold foods, e.g., West Asian appetizers. The flower buds have a more pronounced flavour and have been tried as a caper substitute.

Purslane comes from India, where it was a food crop centuries ago. It was Gandhi’s favorite food. Now it also grows across America, and around the world.

– Steve “Wildman” Brill, From Stalking the Wild Dandelion: A Guide to Wild Edible Plants for Parents and Teachers to Use With Children (A new, as yet unpublished, work-in-progress) Purslane (wildmanstevebrill.com/Plants.Folder/Purslane.html)

3 responses to “Tomatillos and Corn for Two Salsas (real food)”