I don’t know; maybe I just don’t have it in me. I really want to be a babe (“buddy” just doesn’t have the same cachet as “babe”) but… well, you know… I am still a

My wanna-be-babe thoughts about the BBB’s May challenge, Italian Knot Bread:

Allow me to drone on a little more about the lard factor. Not that I really have anything against saturated fat. For instance, I love butter. And of course, bacon is an essential in our diet.

However, I’m not positive that I really like our lard OR things that have been made with lard.

It brings to mind a reception I attended in East Berlin in 1990 (yes, that’s right, when the wall was still standing – just – and Berlin was officially divided by armed guards). There were many crudites being served, almost all of them meat related. However, I was really craving vegetables and cheese and was thrilled to see bite-sized cucumber slices with little mountains of herbed cream cheese piped onto them. How delightful!!

I popped one into my mouth and held it there, so I could really savour the cream cheese. And held it there a little longer. The cucumber was wonderfully crisp. But the cream cheese was, umm… weird tasting. What to do, what to do… I stood there, frozen, in that formal room filled with dignitaries. Holding the dressed cucumber slice in my mouth. Trying to look casual. The cream cheese was really funky. Because it wasn’t cream cheese. It was lard!! Herbed lard!! No doubt a delicacy. That someone was very proud of. And so, I swallowed it. Congratulations to me; I managed to not gag.

There were two other sticking points about these knotted rolls; the first was that they call for fresh yeast. Now I can buy fresh yeast at one of the delis. But I’m lazy and decided I could use active dry yeast just as easily. So I looked into various sources to remind myself about how much I’d need.

According to Carol Field in “The Italian Baker”:

And Sydny Carter wrote the following in Yeast: The Basics:

And from Golden Oven: leavening agents

Which works out to 13 gm active dry yeast for the full recipe for the Italian knots. I think.

And then there was the flour. Ilva called for “normal bread flour”. I wasn’t quite certain what she meant by that but then I noticed she mentioned that the recipe in Gennari’s book calls for 00 flour. I wasn’t positive but I seemed to recall that 00 flour is much softer than our bread flour.

Carol Field writes that “if you’re determined” to mimic 00 flour, mix “1 part pastry, 3 parts all-purpose” but that (as Karen confirmed in the comments section for her knotted rolls) all-purpose is the closest to 00 in North America.

“Bread flour” to me means a strong flour with higher protein percentage at around 13% (I think it might be labelled “Manitoba flour” in some parts of Europe) as opposed to the ~11% for our all-purpose flour and ~9% for cake flour.

I saw from Tanna’s post that she used some whole wheat flour. And flax seeds too! Ha. So that was the flour problem solved.

More wanna-be-babe thoughts as I made the rolls:

Other problems I encountered while knotting: gale force wind (albeit beautifully scented with lilacs blooming just outside) coming through the kitchen window left open all night; kitchen temperature 14C!! (rrrrr, it’s the end of May!! It is NOT supposed to be the same temperature in the kitchen as it is in the winter!); couldn’t find the two huge jars of honey I got up north a month or so ago – luckily there was some left in the little jar of crystallized rosemary honey languishing in the cupboard; oven started smoking crazily because of juices from previous night’s smoked pork running over unbeknownst onto the floor of the oven – turned oven off and stood around jumping nervously as T bravely dove in to wipe up the steaming mess; oven back on and rolls went in about 15 minutes later than expected; put the rolls on the second from the top shelf of the oven rather than the top shelf – received major flak for almost burning the bottoms (remind me that I should ALWAYS bake rolls on the top shelf of our ancient oven!)

Otherwise, everything else went along swimmingly. 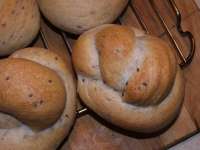 Here is what I did to make the knots:

Under no circumstances should you use water from the hot water tap. Of course, saying that it is unsafe to use water from the hot water tap might be an urban myth, but why tempt fate? Heat the water in a kettle or microwave and add cold water until it is the correct temperature, (use the baby bottle test on the back of your wrist – your fingers have no idea of temperature!) Or you can use a thermometer.

*** The unbleached all-purpose flour is “No Name” (about 11% protein). The whole wheat flour is “Robin Hood” (about 12% protein). The actual recipe calls for all “00 flour” which is roughly equivalent to all-purpose flour with a little cake flour added. I believe it is around 10% protein, but of course, I could be wrong wrong wrong. (My being wrong has been known to occur on other occasions.)

**** The actual recipe calls for only 250 gm biga but I decided to just go ahead and use all of it. What difference would it really make? That I would be making slightly larger knots??

Next time, I’ll try to make just the amount of biga required. The biga is 54% water, 100% flour and .2% active dry yeast. Obviously, the yeast will be the trickiest part to deal with… let’s see now… if I used 162 gm flour, 87.5 gm water, .3gm yeast (I think I’d just fill around half of an ⅛ tsp – our scale isn’t sophisticated enough to do fractions of grams) to make about 250gm biga.

***** If you wish to serve warm bread, reheat it after it has cooled completely. To reheat unsliced bread, turn the oven to 500F for 5 minutes or so. Turn the oven OFF. Put the bread in the hot oven for ten minutes.

:: My Kitchen in Half Cups: Italian Knot Bread (Tanna’s half recipe with whole wheat flour and flax seeds) 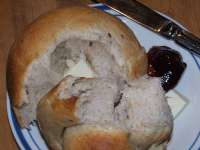 The rolls were HUGE!! And beautiful – perfectly cooked!

And how did they taste?

Fabulous!!! We had them for breakfast this morning – warm (reheated after allowing them to cool) with butter and red currant jelly. Tomorrow night we’re going to use them as hamburger buns.

I’m not completely convinced that the lard made all that much difference to the flavour or texture and will probably just use olive oil next time. And even though Tanna ground her flax seeds, I think I’ll leave them whole. I rather like that there are seed lumps in the rolls. 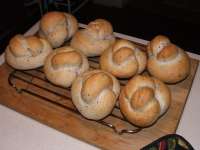 Interesting that the dough I made wasn’t even remotely slack the way that Lynn’s (Cookie Baker Lynn) was. But I’m really glad she mentioned to spray the rolls just before baking them to make them crusty. Brilliant!!!

By the way, you’ll be happy to hear that when the rolls were rising, I found the 2 litres of northern honey I bought. No wait, I lied. I didn’t find it. T showed me where I had carefully put it so I would know where it was.

Also, when I was wandering around the internet in search of information on lard, I came across this wonderful recipe booklet from the 1950s: Mealtime Marvels: Lard in 133 Recipes. The front cover alone is worth looking.

Ilva (Lucullian delights) is the host of May 2009’s Bread Baking Babes‘ task. She wrote:

[I]t is time for our monthly bread and this month I got to choose what to bake and it didn’t take me long to decide which bread it was going to be. A couple of months ago I bought an Italian bread book called Pane. Il piacere di preparare pane in casa by Anna Gennari and every bread I have baked from it has been really good but the one that have had the biggest success all over (and then I mean with every member of the family, dog included) is pane di pasta tenera condita or what I call Italian Knot Bread. […] [I]f you want to join the ranks, make, bake and blog about the bread and send me[, Ilva,] the link to the post before the 30th of May [2009] and I will send you a Buddie badge and include you in the roundup!

The Breadline Africa Worldwide Blogger Bake Off Challenge was created and began on 15 October 2008. (It ends on 15 October 2009 or when US$1 million has been raised, whichever occurs first.)

For more details on how you can join in, please see:

Breadline Africa is an internationally registered charity supporting ground level African charities that are working with communities to help them to become self-sustainable and “break the cycle of poverty in the lives of individuals and communities in Africa through sustainable, long-term solutions“.