Look what we just got!! 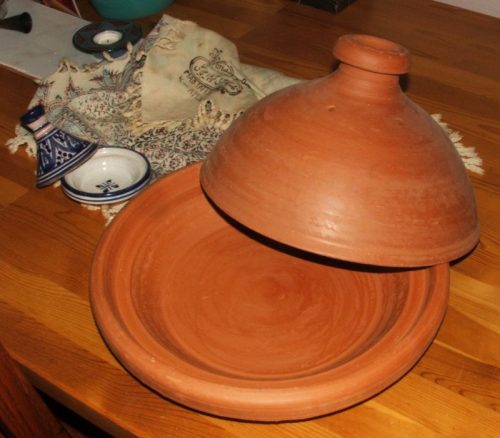 It’s exactly what I’ve always wanted
A very extra special thing
For it’s useful and quite pleasant
And it’s just the sort of present that is
Fit for a king!

It is a tagine!

We’re so excited. Doubly! Because, yes. The tagine is unglazed!

Because the shop is quite small and run by a husband and wife team, who are often out to give classes, or make deliveries, we had to make an appointment. After a little difficulty understanding that the call was NOT a scam artist to tell us about our Windows computer. Suddenly when I was grilling the caller about what he wanted, I heard the word “tagine”. Just as suddenly, I was much friendlier and it was arranged that we would go to his shop on a Friday afternoon at 3pm.

The day before, when we got back from grocery shopping, there were two messages on our machine. After listening to them, my first impulse was to erase them. Here’s what I heard:

As I was about to hit “delete”, I recognized the man’s voice! T called back to learn that the fellow wanted to change the meeting time.

When we arrived at Haven Furnishings, we were greeted warmly in the crowded small warehouse/shop that is full of many many tagines (glazed and unglazed), beautiful inlaid tables, and ornate wrought metal lanterns. A large lantern was marked “not for sale – rental only”.

The man had set aside two unglazed tagines for us – one quite small and one larger, with a 10″ diameter bottom saucer. We asked for the larger one; he picked it up and tapped on the bottom to show that it “tinged”. What a beautiful sound!

Ari was very enthusiastic about telling us how to care for it. He asked if we knew what to do. T said, “yes, soak it for an hour” and the man laughed, looked at me with twinkle in his eye, and said, “He likes fast food!”

As he explained about how to season the tagine and the warranty, he said he would be able to tell if we cheated on the time of the pre-soaking – it would crack in the middle.

We carefully followed his instructions and were amazed that the tagine really did bubble on step one of the process!! We had to use the bathtub because, aside from the kitchen sink, that was the only place large enough. 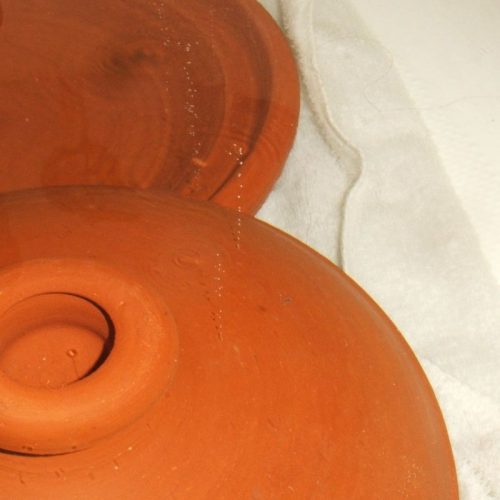 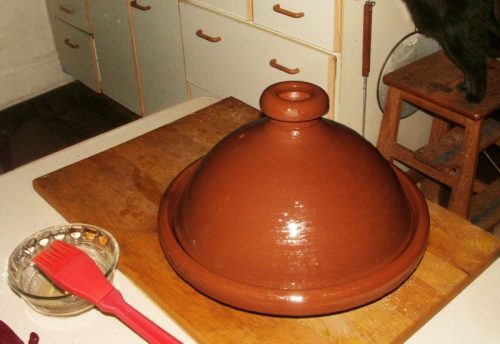 Some darkening or staining should be expected with the use of a tagine; this is a desirable characteristic. According to Moroccan cookbook author Paula Wolfert, you can speed up this darkening by “curing” the tagine instead of just seasoning it. This can be done by rubbing ashes along with oil on the tagine and then leaving the tagine in a slow oven for eight hours or longer. Sounds messy, but the tagine should take on a beautiful, aged look.

The Spruce Eats: How to Season a Tagine
To season a new unglazed tagine: Fill the shallow bottom dish with water or milk, place it in a cold oven, and set the temperature to 350°F. Bake the pot for thirty minutes, turn off the heat, and let it cool in the slowly receding heat. Then drain off the liquid, wash the pot, dry it well, and rub with olive oil.

The next morning, we couldn’t stop admiring it! Not even the charming begging from the furry black fiend distracted us. 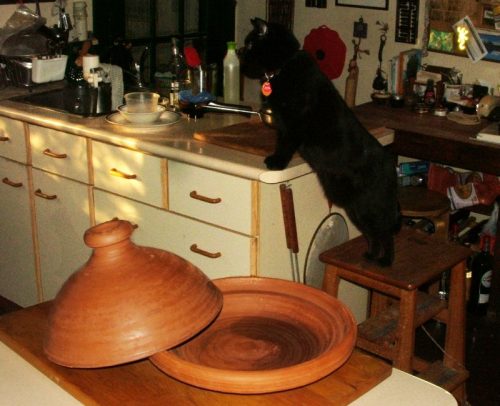 Naturally, almost as soon as the tagine was ready to use, we tried it out. Of course we did!

What did we make? A tagine, of course! 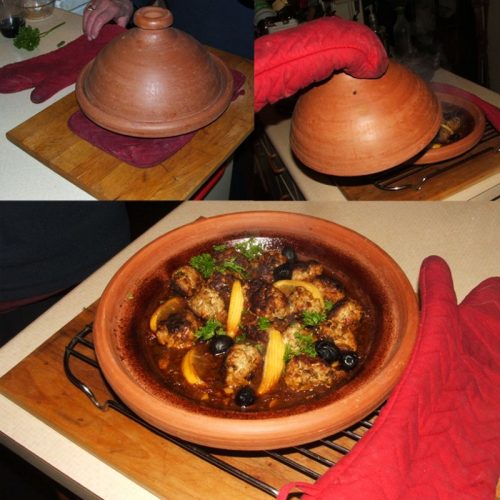 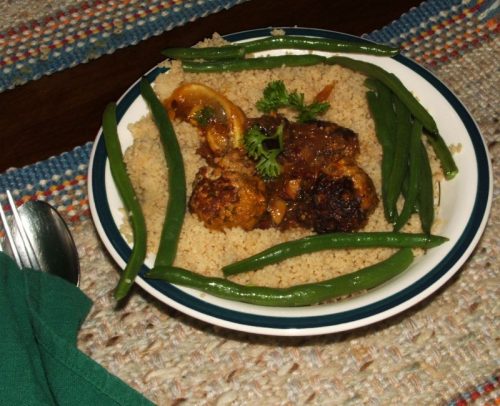 We would have used preserved lemons if we had had any. But we didn’t. It turns out that it didn’t matter. The lemons ended up tasting exactly as if they had been preserved.

We thought the saffron might get lost. We were wrong.

The. Resulting. Tagine. Was. Fabulous.

T used the oven to cook the tagine, but next time, we will do it on the stove top – with a spacer placed over the electric burner to protect the tagine from cracking. (Remind me to rave about the chicken tagine T made a couple of nights later!)

Apparently, Paula Wolfert is THE English speaking expert on clay pot cooking – especially tagines. We have seen her books at the library. We have even read them before.

Suddenly, they are even more compelling reading than before. And while Paula Wolfert says you don’t have to have a tagine but goes on to urge you to get one, I am adamant that if you like Moroccan food (who doesn’t?) then you neeeeeeeed a tagine.

Must you acquire [a tagine]? No, you don’t have to-but you really should. A tagine will make it possible to cook Moroccan food the authentic way and present your dished beautifully at table, and the results will great reward you. […] [T]he tagine is an ingenious device in which a huge category of Moroccan dishes are best prepared. […] [T]he vast majority of Moroccan dishes are best cooked slowly in earthenware. For reasons having to do wiht the recycling of moisture due to the conical shape of the lid and the final flavor-rich toasting once most of that moisture has been cooked off or absorbed, tagines make it possible to achieve a succulence and depth of flavor obtainable no other way.

Paula Wolfert, Introduction | The Food of Morocco, p10
Tagines cook food beautifully, and they are relatively inexpensive. The high conical-or dome-shaped-cover, which fits into the shallow base, acts as a kind of closed chimney. Since the heat on a stovetop comes from below, the top of the cover remains cooler than the rest of the pot, which causes steam to condense and drip back onto the stew, preventing the food from drying out.

We found the perfect storage spot at
the bottom of the cookbook shelf in the kitchen! 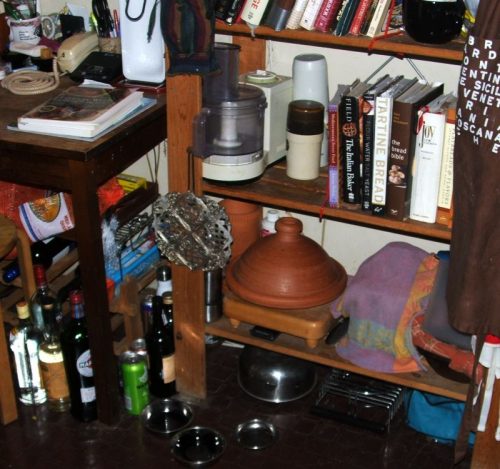 (Sure, the fondue set had to be relegated to sit under the bookshelf,
next to the tortilla press in the turquoise bag,
but who – aside from the cat – cares?)

edit 12 December 2018: Last night, as we were savouring a Thai curry that T had made in our tagine, he reminded me why we suddenly neeeeeeeeded to get this wonderful device. It was because he was re-reading one of our back issues of SAVEUR:

[W]hen I heard that the company that makes [the Römertopf clay pot], I decided to reacquaint myself with my roaster’s charms. After a week of savoring perfectly moist fish, nicely browned lamb, and deliciously crusty bread, I became a clay pot convert all over again.
[…]
Even before mud was shaped and heated to be made into cooking vessels, the ancient Etruscans of Italy wrapped meat in wet clay and set it directly into burning embers: as the clay hardened, it sealed in the food’s juices and prevented it from drying out. Since then, numerous styles of day cookware have evolved. Curious about my Römertopf’s rich pedigree, I got in touch with Paula Wolfert, the California-based culinary scholar, who is working on a cookbook devoted to clay pot traditions from around the world. She explained to me that earthen-ware’s prime appeal is its ability to distribute heat evenly and, in the case of unglazed versions, retain moisture — whether you’re using a Römertopf, a Bulgarian gyuvech (a ceramic pot), a Tuscan mattone (a terra-cotta vessel often used for pressing and crisping chicken), a Spanish cazuela (casserole), or a cone-shaped North African tagine.

– Maria Speck, Good Earth, SAVEUR No. 116, December 2008, p18-19
In Morocco, conical, unglazed earthenware tagines are used to prepare a wide variety of spicy and sweet stews (also called tagines). The architecture of the vessels is no accident; their sloping lids collect rising steam and allow moisture to rain over the food as it cooks.