summary: asparagus risotto recipe without added cream, butter or cheese; how to use the stalks for added flavour; garnishing with chives – including the flowers; (click on images to see larger views and more photos) 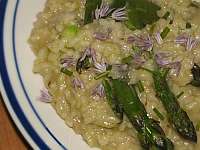 A while back, when we discovered the wonders of orzotto, I imagined that it was

So fabulous that we may not buy more arborio rice when it runs out. We’ll get barley instead.

Well. Of course, we got more arborio rice. We had to.

Why? Because T saw someone on the food network making asparagus risotto. The really exciting thing about it (aside from the fact that it sounded delicious) was that it called for using up the stalks of the asparagus too. No waste!! I love that. Our compost heap already gets plenty of vegetable leavings; it doesn’t have to have asparagus ends in it too.

Not to mention that there will be more asparagus for us in this brief window of asparagus season. I love that even more.

Naturally, T consulted the internet to see what other people did. Most of the asparagus risotto recipes there called for adding cream and/or butter and/or cheese and/or white wine. We decided to forgo these ingredients and make the risotto with just chicken stock because a.) one of us is on a boring “no fat allowed” diet, b.) we wanted to make sure that the asparagus flavour didn’t get lost and c.) we didn’t have any white wine in the house. (He added a tiny bit of sherry in place of the wine.) 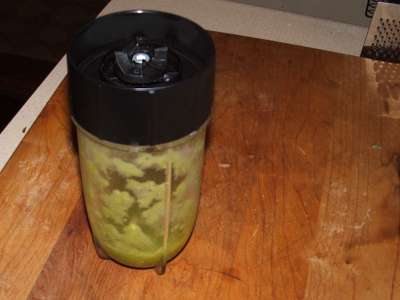 This is the part that really thrilled us. The only part that gave us pause was to par-cook the stalks. We were quite concerned about getting an over-stewed asparagus taste. Ewwww, there’s really nothing more unpleasant, is there?

This isn’t the first time that we’d heard of using the normally discarded asparagus stalks. A couple of years ago, we’d read a recipe in “At Home in Provence” by Patricia Wells that the stalks could be used to make asparagus soup. We tried it at the time – I meant to blog about it; I really did – but we didn’t love the results. The soup ended up tasting just a little too, well – asparagussy. (I should look through our photos to see if we took any pictures. As I recall, it didn’t look bad….) 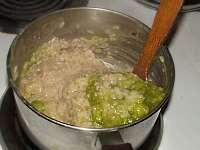 BUT the idea of pureeing UNcooked asparagus and adding that to the risotto was quite appealing. So that is exactly what T did. The puree added the lightest hint of spring green colour to the risotto. A few of the stalks didn’t get completely pureed but were lovely, slightly crisp and tender and tasted remarkably of delicate onion.

The second time we made asparagus risotto, we didn’t have any chive flowers left so we garnished with a light grating of pecorino cheese. This was good too… the asparagus didn’t get lost.

Next time we’re thinking a touch of lemon zest might be a nice addition.

based on our recipe for Mushroom Risotto

Note that measurements will vary. 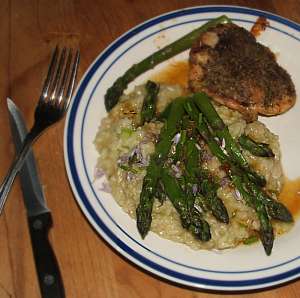 We served the risotto with oven roasted chicken. T deglazed the chicken pan with a little sherry and drizzled it over the risotto as an added bonus.

Did I mention that asparagus risotto is wonderful? Really wonderful? So wonderful that the small amount that is left-over is the perfect thing to have for dessert instead of ice cream that someone says is the best ice cream ever made?

Oh, yes, and before I forget, we really should try making this with barley rather than rice. Because I bet that asparagus orzotto is equally brilliant. Which is more thrilling? Asparagus being in season, or lilacs in bloom beneath the open screened window? This furry black creature has NO difficulty deciding… He has spent many of his waking hours (when he isn’t careening up and down the stairs) languishing on this window sill.

2 responses to “Use ALL of the Asparagus for Asparagus Risotto”