recipe: Butter Tart(s), makes one pie or many many tarts

Wha??? How can it be the end of November already?! Luckily I am not the only one taken by surprise and even though yesterday was the deadline for WTSIM…#11, this post might just squeak in to qualify for the round up for:

Waiter, there’s something in my… topless tarts!

(if you dare, click on image for larger view and more lurid photos) 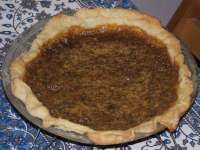 Not long ago, T announced that he wanted to make butter tarts. Whoohoo!!! I LOVE butter tarts!! I especially love butter tarts that have been made with currants.

T: Do you know where our butter tart recipe is?

me: (squealing with delight) Tarts? Yay!!! It’s in the brown book. Are you going to use raisins or currants? (hoping the answer is “currants”)

me: Good Answer!! …tarts!! Butter tarts!! mmmmm… with currants. Ooooh, I love butter tarts!! Are you making them today? Are they ready yet?

T: Whoa!!! I’m going to make a butter pie. Tarts are too finicky.

me: (horrified) No, no, they’re dead easy. If you make the pastry, I’ll get the tart shells ready. Because tarts are better!

T: Okay… Umm, there are two recipes for butter tarts in the brown book. Which one do we use?

It’s true. It had been a while since we’d made butter tarts (far too long, really…). When I looked in our recipe files, I couldn’t remember which butter tart recipe was Mom’s and which one was not. Because as far as I’m concerned, Mom’s butter tarts are the best.

Here is what T did to make his giant butter tart:

Let cool. Serve naked… as in “without any garnish” (What did you think??? This is a family blog!)

* N.B. Mom’s recipe calls for 2 cups golden brown sugar. We didn’t have any in the house, so T substituted with demerara and white sugar and corn syrup.

Even though I kept saying that it would be way better if it had been tarts, I have to admit here that butter pie is easily as good as butter tarts. I’ll even sign an affidavit to that effect. (But next time, I hope we’ll make lots of little butter tarts rather than one large butter pie. :whee:)

Before we start another debate on what is or isn’t a tart, let me make it clear that a tart has NO TOP CRUST. In other words, the filling is clearly visible because there is nothing covering it – not a pastry lid, not a crumble, not a layer of mashed potato. Nada. Zip. Nothing. We are talking quiches, flans and tartes tatin. Savoury, sweet, hot cold – I don’t mind. Just topless. […]

The deadline for WTSIM… topless tart! is 26 November, 2007. If you would like to participate, please read the following for more information: