recipe: Potatoes and Peppers on the Barbecue; (click on image for larger view and more photos)

We just got back last night after a holiday and I hope that even though this is two thirds on-topic and two days late, Jeanne will be lenient and consider this post for inclusion in the round up of 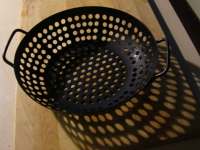 When the announcement for this month’s WTSIM… fell, we were just preparing to travel to the other side of the country, to celebrate several birthdays and attend two family reunions. We had a wonderful time visiting and feasting, using borrowed computers just long enough to check email. Just before we left, we had the following feast, using the left-overs to make sandwiches for our no-frills flight west the next day.

We would have done a meatless barbecue as per Jeanne’s instructions; really we would! We were contemplating barbecuing squid with olives, roasted garlic and lemon in the barbecue wok but taking squid left over sandwiches on the airplane didn’t seem like such a great idea. 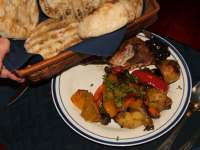 So chicken it was. And vegetables. Lots of vegetables! And buns. Lots of buns! Not exactly a meatless barbecue, I know. But I’m hoping that Jeanne won’t notice the chicken lurking on the plate under the basket of buns. Surely those lovely grill lines on the bread will distract her enough….

Here is what T did for the vegetables:

Potatoes and Peppers on the Barbecue

These vegetables are wonderful hot or cold. They are great in sandwiches or hamburgers.

Garlic and green beans work very well in the barbecue wok too. Please note that green beans should be parboiled first for about 4 minutes.

We served the vegetables (and chicken) with T’s coffee barbecue sauce. And I loved the addition of the rapini!! It didn’t turn to mush as I thought it might.

I still can’t decide if they were better that night or the next day in our sandwiches. However, I can say without any hesitation that airplane food has never tasted so good!

Waiter, there’s something in my (WTSIM)… meatless barbecue!

This month’s WTSIM… is hosted by Jeanne (Cook Sister!). She wrote:

[P]eople seldom think beyond their steak, chops and sausage on the flames and leave the vegetarians to pick at the salads. But when you start looking, there are a wealth of other options beyond meat. Vegetables and fruit can be cooked both on the grid and in the coals, and if you have a gas grill you can cook an even greater variety of non-meat treats. But I realise that for many people this total abandoning of the flesh may be just a tad too challenging, so I will widen the “no meat” rule to include seafood of any description, as long as you cook it outdoors on some sort of barbecue. […] Come on babies, light those fires!

The deadline for WTSIM… meatless bbq! is 27 August, 2007. Please read the following for more information:

edit 4 September 2007: eek!! Something bad happened to this post and half of it was missing!! (it’s fixed now) I only noticed because I came in to report that Jeanne has posted the round up for this month’s WTSIM… Read about all the wonderful meatless barbecue dishes:

2 responses to “vegetables and buns on the barbecue (WTSIM… #8)”