summary: recipe for Verdi’s spinach gnocchi, based on a recipe in the Fred Plotkin’s article “Bella Cucina! The Story of a Hungry Maestro” in SAVEUR magazine, issue #123; information about Presto Pasta Nights (PPN); (click on image to see larger views and more photos) 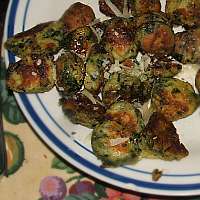 I’ve always loved gnocchi but assumed they were WAY too hard to make. So we were excited to see a recipe in a recent SAVEUR magazine and it was doubly thrilling for me to see that it was based on a recipe by one of my favourite opera composers (I do love SAVEUR magazine)!

I love that this dish of Verdi’s is basically green! How fitting! It’s also delicious! Its only small drawback is that as you’re eating it, you might get an audio virus of the Brindisi from “La Traviata”. (That Brindisi is brilliant in context but I suspect even Verdi would agree that its brilliance tarnishes after being repeated for hours, especially if it’s just a few phrases repeated over and over.)

[I]n Italy’s agricultural heartland, [Giuseppe Verdi] was nourished by the regional dishes his mother served, like chicche (pronounced KEE-kay), tiny spinach gnocchi sprinkled with the local Parmigiano-Reggiano cheese, as well as by the stories he heard from travelers about the great theaters of northern Italy. By the 1850s, Verdi had become not only a well-known composer but also a successful farmer and a renowned cook. “If only they knew how well he composes risotto alla milanese,” wrote his wife, Giuseppina Strepponi, in a letter describing a standing ovation he received upon a visit to Turin’s Teatro Regio.

– Fred Plotkin, Bella Cucina! The story of a hungry maestro in SAVEUR no.123′

Oooh, risotto alla milanese!! I’d like to have that too please…. Alas, SAVEUR did not include that recipe this time. But the gnocchi more than make up for the omission. 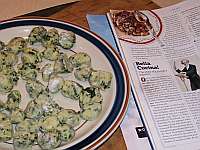 It turns out that gnocchi are very easy to make. (Ha. Especially for me… I watched. :-)) But I have it on good authority. There really is no good reason to buy gnocchi. Homemade gnocchi are WAY better than any storebought gnocchi we’ve had.

We served the gnocchi with lemon chicken and broccoli. The gnocchi were really more like potato puffs with a little spinach in them than they were like pasta. But they’re called gnocchi so I’m sticking to my guns and saying they’re pasta!

And just because they were like potato puffs doesn’t mean they weren’t wonderful. Au contraire!! (Or al contrario if you prefer.) They were delizioso.

Here’s what we did to the SAVEUR recipe:

Verdi’s spinach gnocchi
based on a recipe for Chicche Verdi del Nonno in SAVEUR magazine, issue #123

Please note that the measurements are approximate. You’ll want to play with them.

» SAVEUR magazine suggests boiling the spinach and squeezing it dry after cooking. But the May/June 1998 issue had a recipe for torta verde that included this salting method of preparing the spinach. We ALWAYS use the salt method. The spinach is never slimy and always retains its beautiful emerald colour.

» The SAVEUR recipe is for “gnocchetti” which I gather are smaller than gnocchi. SAVEUR suggests making them into ½ inch discs (½ inch ropes cut into ½ inch pieces).

» As soon as our garden is growing again (if winter ever ends…), of course we’ll use fresh sage leaves rather than dried. The SAVEUR recipe calls for using 8 fresh sage leaves for a half pound of russet potatoes.

» The Italian name on the recipe is Chicche Verdi del Nonno, which SAVEUR translates as “gnocchi with brown butter and sage” but as far as I can tell with my little knowledge of Italian, that should translate literally as “Verdi’s Grandfather’s Chicche”. I wandered around with google to discover that chicche is translated as “goodies”, “gems”, “gnocchetti” and “gnocchi”. Although the first two are excellent descriptions, and the third is probably the most correct, I think I’ll go with the last one…. 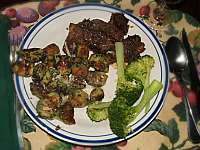 We served the gnocchi garnished with grated Ilha Branca because we didn’t have parmigianno on hand (comme d’habitude – the Portuguese Ilha Branca is markedly less expensive and not that unsimilar to parmesan). Oven roasted lemon chicken and steamed broccoli were excellent accompaniments.

While this might not be the instant dinner that Ruth had in mind when she created PPN, it is awfully easy. And I can’t really see any reason that the gnocchi dough couldn’t be made in advance and then cooked just before dinner. That way, they could be used for a “presto” dinner.

Note to self: Have lemon chicken again soon. It’s the most wonderful oven-roasted chicken pieces. Remind me to post the recipe!

Presto Pasta Nights
Ruth (Once Upon a Feast) created this lovely event for people to share their favourite pasta dishes. This week is PPN#150! Wow!! Well done, Ruth, for keeping this event alive! Susan (The Well Seasoned Cook) is hosting this week.

edit: Susan has posted the PPN#150 round-up. Do take a look. There are several pasta dishes that you neeeeed to make.

None of our cookbooks or Italian/English dictionaries have any entries for “gnocchetti” so I am resorting to Wikipedia. It sounds logical.

Gnocchi […] is the Italian name for a variety of thick, soft noodles or dumplings. They may be made from semolina, ordinary wheat flour, potato, bread crumbs, or similar ingredients. The smaller forms are called gnocchetti.