summary: wine pasta with ham, peas and mint in optional cream sauce based on a recipe in “Piano Piano Pieno” by Susan McKenna Grant; tastes great but looks s~c~a~r~y; information about UNICEF: please remember that even though the children no longer carry UNICEF boxes, donations are still welcome; (click on images for larger views and more photos)

Two years ago, for Hallowe’en we presented ghoulish fingers. This year, we’re not quite sure what this stuff looks like. But….

want to see something really scary?!

These photos have actually been lurking in the “to post” files for quite a while. 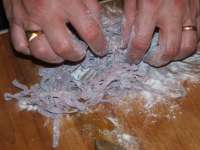 In her cookbook Piano Piano Pieno Susan McKenna Grant described some pasta she made using wine rather than water to make the dough.

Pasta Fresca Ubriaca al Chianti
Fresh Pasta, Drunk on Chianti, with Peas and Pancetta
This recipe produces lovely wine-colored pasta. Served against a back-drop of cream, bright green peas, pancetta and fresh mint, it produces a pretty dish that is easy to make and very elegant.

Sounds good, doesn’t it? And it seemed like a good idea. Really it did. To me anyway.

T wasn’t so convinced but being the wonderful guy he is, he gamely tried it. Simply because I asked him to.

And it was… WELL… I have to tell the truth. 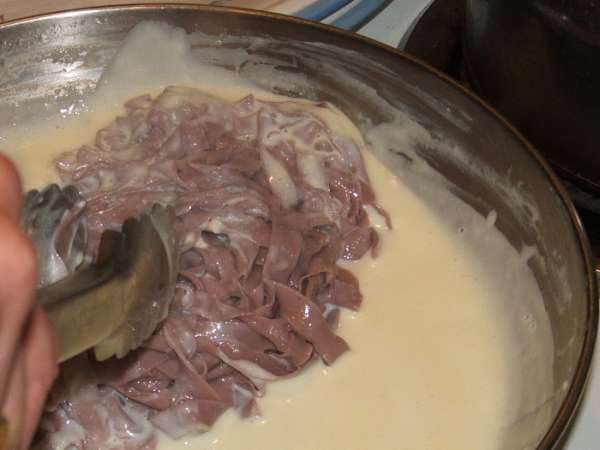 “Drunk on Chianti”, eh? I’m not so sure. Oh my. …I think we weren’t quite drunk enough. 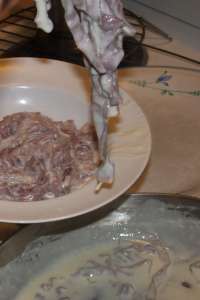 The pasta was way too sticky. It was basically the texture of overdone pasta before being cooked.

Now, this might have been partially due to the addition of a little olive oil to the dough. We’ve never done that before. Errrmmmm, we’re never going to do that again. 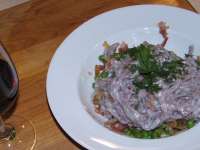 However, the sauce was absolutely delicious. We’ll definitely have it again on regular fresh pasta. Just forget latching onto some foofy idea of using wine instead of water to make “lovely ruby to violet dough”. Brrrrrr.

nope, no measurements… you’ll have to wing it 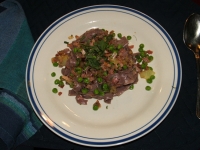 We tried the pasta again a couple of nights later without the cream sauce to see if maybe it would improve the looks. Hmmm, not much better. However, let me stress that in spite of the garish looks, this was delicious!

Coloring [the pasta] offset[s] the vibrant green of my spring peas. […] Naturally, this dish can be prepared using dried pasta or […] fresh pasta […] but then you won’t get the artist’s palette on the plate these burgundy-colored noodles produce.

I don’t know. Maybe it’s because the Sangiovese we used to make the pasta wasn’t actually from Chianti?

Take my advice. Forget about having an artist’s palette on the plate! Make this without colouring the pasta. That way, you can turn on a few lights in the dining room.

Because peas, ham and mint on pasta is absolutely delicious.

I still find it a little unnerving that UNICEF boxes are no longer distributed in Canada. But, of course, that doesn’t mean that UNICEF and Hallowe’en don’t go together. Canadian school children (and their parents and teachers) can still help to build a better future for children.

Please read about how to donate to UNICEF:

1 response to “Want to see something really scary?!”