The other night, we had the most amazing apple tart with blue cheese (Back Forty Highland Blue) and I suddenly realized that I had not yet raved about Crème Fraîche Market Cafe on Annette Street. 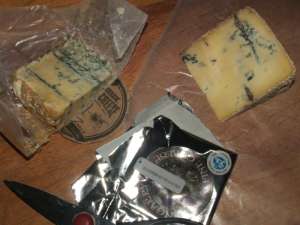 Just before Easter, on a beautiful sunny day when there was the barest hint of spring in the air, we went for a lovely bike ride, winding our way through the neighbourhoods. I was absolutely thrilled to look down and see the following number on my odometer:

Now before you start clapping and cheering, I feel compelled to say that a.) this is since 1996, b.) T just crossed 59000 km on his bike odometer, and c.) we purchased our bikes at the same time.

Still, 48000 km IS something to celebrate. And as I was congratulating myself and trying to pay attention to the road instead of admiring all those zeros, we noticed a new shop not far from our house: Crème Fraîche Market Cafe (see more about them on FaceBook) 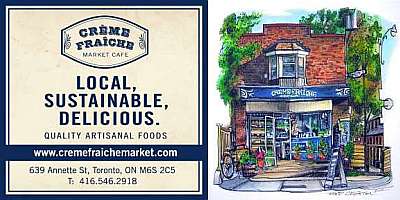 It’s a lovely place – small but inviting, filled with the aroma of fresh baking. There are savoury and sweet things available. They also have an espresso machine.

They make really good espresso. We stood at the wooden bar by the window, looking out at sunny Toronto beginning to wake up from the dreary winter blues. The flavours and sounds and aromas inside that little haven was like a holiday. It was as if we had stepped for those few moments into a small cafe in France.

And yes. They have cheese. Artisanal cheese from Ontario. We asked if they had any blue cheese.

Yes, of course they have blue cheese.

That day, they had three, including Don’s Blue (goat’s milk) from the Monforte Dairy – but we’ve had that before. We wanted to try something new. There were two that we tasted: Back Forty’s Highland Blue (made from raw sheep’s milk) and Glengarry’s Celtic Blue Reserve (sheep’s milk).

We couldn’t decide which one we liked better. After a lot of deliberation, we bought both.

That evening, for dessert, we did a taste test. There was some of the French St. Agur already in the fridge. We put wedges of each kind on our plates, carefully dividing it so each person got the same amount of rind. And yes, we ate the rind.

All of the cheeses were wonderful and all stood up very well to the delicious and caramelly Costa Rican 7-year-old Rum that friends had brought for us.

Surprisingly, the St. Agur that we love so much didn’t even begin to stand up to the Ontario cheese! It was completely faded in comparison to the others!

Here’s what others have to say about these cheeses:

Sticking to tried and true traditional cheesemaking, Jeff & Jenna Fenwick, the new owners of Back Forty Artisan Cheese are carrying on the spirit of old world methods using 100% raw ewe’s milk in the production of their hand-lovingly crafted, small batch artisan cheeses.

The Celtic Blue is a soft creamy blue cheese, with delicate blue veining and a limestone coloured natural rind which is developed by specific ripening cultures. The typical blue taste is mild and not aggressive and is softened by a nice buttery aroma. Available by the wheel or cut wedges wrapped in French paper or foil. Aged 2 – 3 months.

Saint Agur is a blue cheese made from pasteurized cow’s milk in the village of Beauzac from the mountainous French region of Auvergne. Since 1988, the Bongrain Cheese Company has been manufacturing this cream enriched cheese with 60% butterfat. On account of the high fat content, it certifies as a double-cream cheese.

Saint Agur […] is a perfect balance of creamy and blue cheesy. It is buttery, like a triple-cream brie. It melts in your mouth and spreads smooth. It’s awesome.

– Drew Gall, Who the heck is Saint Agur? The Canada Cheese Man 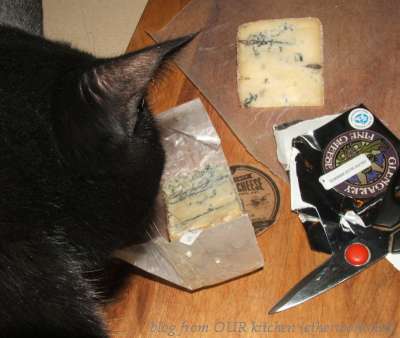 It’s not easy taking photos when
there is a resident furry black fiend.

Remind me to tell you about the apple tart. Sure, I’ve droned on about apple tarts before, but this one is different. It’s so so so good! (Of course there is no photo yet. Which is okay by me because it means we will have to make it again.)