summary: recipe for Seville orange marmalade; what to do and what not to do (click on image for larger view)

After yesterday’s ominous looking photos, you might be expecting more whining. But no. I’m very pleased to report the following… 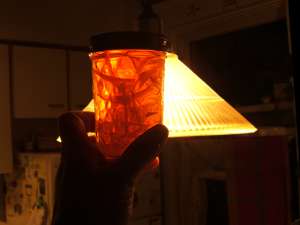 A week or so ago, we were very excited to see that someone in Toronto had bought Seville oranges.

Whoohoo!!!! We neeeeeeeeeeded Seville oranges!! Because now of course, we know everything there is to know about jamming (cough), and we wanted to make marmalade. And out we went, slogging through the snow, to the nearby street that is full of fruit and vegetable stores.

Only ONE of the fruit and vegetable vendors even knew what we were talking about. He said he thought he might have some on Friday.

We were too lazy to go all the way to St. Laurence Market. We walked down to our high street the following Friday to the store we call “the expensive vegetable store”. The vendor’s eyes lit up. He pointed to the California Seville oranges that had just come in. They were 1.99/lb. Excellent!! We were expecting a MUCH higher price.

We bought 6 oranges and raced home to get started on making marmalade, only to be completely befuddled by the trusted family recipe, written out years ago by someone who assumed that whoever would use the recipe had made jam before….

(Okay, okay, maybe there’s going to be a little whining.)

Squeeze out the juice saving juice and the pulp with seeds separately. […] Add skins to the saved juice then add water to make up double the fruit […] simmer up to an hour or until done. […]

After about half an hour, arguing about exactly what “saving juice and the pulp with seeds separately” and “until done” meant in the recipe, we finally agreed on the definitive English translation and began chopping and juicing.

And still, our first try at making marmalade took 3 days instead of 2. Why?? Please read on.

On Day 2, we were admiring the just-processed jars, only mildly worrying that the contents seemed awfully liquid and that the peel was floating on top or lying at the bottom of each jar. I said that we should move the jars now. And lifted the rack holding all the jars.

Almost immediately, one of the jars began to tip. I adjusted and it settled back. Sadly, a different jar began to tip. More adjustment. More tipping.

More adjustments. Radical tipping of more jars in all directions, more wild adjustments, more shouting as, in slow motion, all the jars crashed to the floor.

More shouting. Then the amazed discovery that only one jar had burst its seams and dumped its contents on the floor. 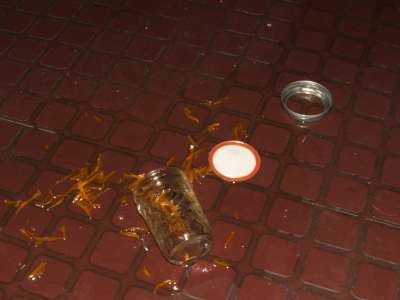 Yes, even though there is just one jar in the photo, I feel compelled to reiterate that ALL the jars fell.

Even though none of the jars broke, it was starting to become clear that the marmalade would not set and had not been heated to a high enough temperature. Here’s how the conversation went as we cleaned up the mess:

me: Eeeeeek, it’s so liquid!! Is it supposed to be that liquid?!

we: It smells fabulous!

he: The thermometer said 215 and she said to put it between 200 and 220. I really hate thick gluey marmalade.

me: Me too. Let’s see how things look tomorrow. The recipes I looked at did say that it might not set right away.

we: We should probably process it all again anyway. Just to make sure of the seals. Do we have any more lids?

Of course, it didn’t set. We had been so afraid of overboiling and producing marmalade that would “set like concrete” that we had succeeded in making orange syrup.

On day 3, we trekked through the snow in the bitter cold to the hardware store to get more lids. Then we emptied the contents of the jars into a pot (good thing we did this; all the jars were quite sticky on the outside – clearly their seals hadn’t held at all). We reboiled the mixture until the temperature reached 221F and re-processed for 8 minutes. We at last have marmalade.

How beautifully dispersed the peel is now! 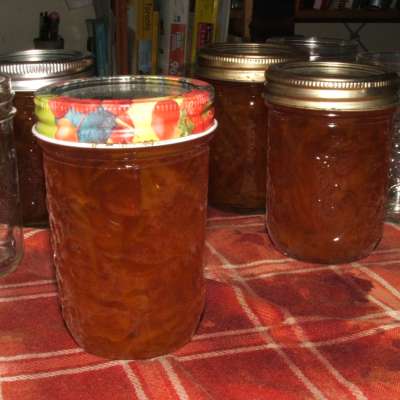 So. With 6 oranges, instead of producing seven 250ml jars of marmalade, we now have four jars… it WOULD have been five jars if someone hadn’t thrown all the unfinished marmalade jars on the floor the day before.

Here’s what we did to make fabulous marmalade:

Boiling Temperature Mrs. Wilson wrote: “Too little boiling and the marmalade will be too thin. Too much and it sets up like concrete. The books say to test on a plated kept in the freezer or with a candy thermometer up to 200/220F.”

It became clear to us that the “200/220 degrees” had to be a typo and/or that Mrs. Wilson had always made her marmalade by feel rather than by using a thermometer. Martha Stewart says to boil to a temperature of 220F to 222F. We went just shy of 221F on our candy thermometer.

After Processing Keeping them upright, carefully transfer the jars one at a time to a safe spot. Under no circumstances is it a good idea to balance all the jars on a rack for “easy” transfer.

We had marmalade on toast this morning and it’s terrific.

The amount of sugar is perfect.

The marmalade is perfect: floral, light, orangey. It’s everything that marmalade should be!

(Hmmmm, I wonder if we need to get more Seville oranges. Do you think 4 jars is enough?) 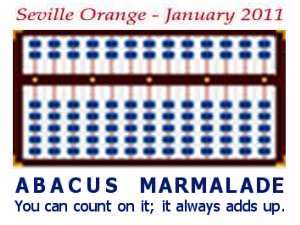 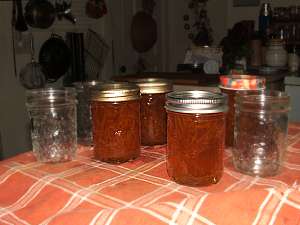 4 responses to “We ♥ Seville Orange Marmalade”