It has been some time that we have been longing to taste mishti doi again. The recent first attempt to make mishti doi was a little disappointing at first (tooooo sweet!!) but T was brilliant and turned the cloying concoction into spectacular ice cream.

Mishti Doi, aka Lal Dahi (which translates as “red yoghurt”) is a lightly sweetened yoghurt prepared Bengali style. The sugar is caramelized first and gives the yoghurt a reddish tinge. We had mishti doi in Calcutta many years ago and have been dreaming of it ever since, never imagining that we could make it here in our kitchen!

With my fractured memory, I had thought there was cardamom in mishti doi as well (but I’m misremembering – it was the malaiya* we had in Benares that was flavoured with cardamom). According to the internet, some people do add cardamom to mishti doi. But T is a purist and wants it to be exactly like the Calcutta sweet shop versions of mishti doi. 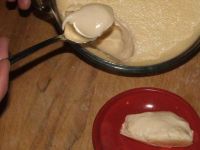 I have only had it once and so my recollection of it was that it was a little denser and more like cheese cake texture. But T has had it many times and says it’s exactly as he remembers.

And this is with fermenting the yoghurt in a pyrex bowl! As soon as we can get to Indiatown, we’re hoping to find unglazed clay bowls for fermenting yoghurt. Then maybe the texture will turn out the way I remember…

But frankly, if we can’t find a clay container, I’ll be perfectly content with our mishti doi finished in our pyrex bowl.

It is most wonderful. Ambrosia, in fact.

Here’s how T made mishti doi using our stove, oven and fridge:

Notes
* The yoghurt starter must be made with milk solids and active bacterial culture only . We used “Phoenicia” brand 3.2% yoghurt. “Astro” and “Western” are other brands that would work (there should be zero gelatin or other thickeners in the yoghurt you choose; they will interfere with fermentation). We would have used our homemade yoghurt but there wasn’t any left. (It’s DELICIOUS!)

** If the milk is too hot when the yoghurt starter is added, the bacteria will die and your yoghurt will not set.

*** Although no reason was given, one recipe cautioned against using stainless steel containers to ferment the yoghurt.

It’s been twenty years that we’ve been dreaming about mishti doi! How tragic to have waited so long when it was so easily in reach.

* I have no idea how to make malaiya. We saw it being prepared outside of a sweet shop in Benares. Lightly sweetened milk (buffalo milk???) flavoured with cardamom was being boiled in a giant copper bowl. The result was a frothy refreshing mousse. It was incredibly refreshing.

Another ambrosial dish, in fact…. (Say, does anyone know how to make malaiya?

6 responses to “We have mishti doi!!”