I can almost hear Mum saying “It’s just like cake on top…”! 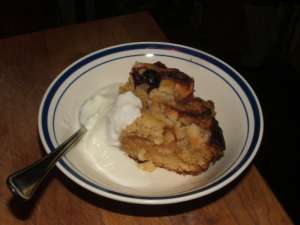 This month, Gretchen (Provecho Peru) chose the BBBabes’ task. And like last month, it is not at all a task. This Kuchen is insanely easy to make!

Sure, it might not turn out exactly as bread, but who cares? It’s perfect for a festive breakfast or dessert.

I did not make Lucia buns today. I was wrapping presents to get them in the post so they’d arrive at their destination in time for Christmas. (I found out AFTER we got home that the deadline was 10 December. Oh oh.) On the way back from the post office, I managed to remember to buy apples. But did I look at the BBB recipe before heading out? Of course not! And now I see that we need tapioca (!! maybe we have some hiding from when I was doing gluten free baking? !!). And cream cheese. Oh oh. I wonder if creamy goats’ cheese could be used as a substitute.

And I’m pretty sure we have pearl tapioca. I’ve never been a fan of tapioca but T adores it. (However, I simply refuse to buy quick-cooking tapioca just to get a tablespoon’s worth – even if it is for the BBBabes!)

instant tapioca = quick-cooking tapioca = quick tapioca = granulated tapioca = tapioca granules = instant pearl tapioca […] These small, starchy granules are used to make tapioca pudding and to thicken pie fillings. The grains don’t dissolve completely when cooked, so puddings and pies thickened with them end up studded with tiny gelatinous balls. […] [J]ust pulverize the instant tapioca in a coffee grinder or blender. […] To use it in a pie filling, mix it with the other ingredients, then let it sit for at least five minutes so that the tapioca can absorb some of the liquid.[…] Substitutes: […] tapioca pearls (Pulverize these first with a blender, coffee grinder, or food processor) OR cornstarch (Use half as much. Cornstarch breaks down if it’s mixed with acidic ingredients, cooked for a long time, or frozen and thawed.) OR arrowroot (more expensive) OR flour (Use a little more.)

15 December 2012, 17:16 I decided to make just half the recipe. Where IS our square pan?! (Ha! Of course, it has lasagne with butternut squash and sage in it….) So I eyeballed our oval dishes and buttered the medium sized casserole dish. And then started making the dough.

Hmmm…. It’s not as much as I thought it was going to be. So, before slicing the apples, I buttered the small oval casserole dish.

Mixing the dough was a breeze. I hand-kneaded it in the bowl for a little bit then set it aside to rest while I made the crumb topping and sliced the apples.

I was thrilled to have found the pearl tapioca and ground it up to go with the apples. And because we DO have cranberries in the freezer, I took Gretchen’s idea and threw in a few.

Like Gretchen, I didn’t take the time to find out what apple pie spice is either and made an executive decision that it was cinnamon, cloves and ginger.

I did NOT find the cinnamon, however, to top up the tiny amount in our cinnamon bottle. WHERE ON EARTH is the cinnamon? Did we use it all up when we made Vinarterta? If so, why didn’t I put cinnamon on the grocery list?

As I was typing the above, I have made a mental note to myself not to forget to put the crumb topping on. (I put it in the fridge while the dough was rising.)

19:40 Because of the sugar, I baked it on the top shelf to prevent it from burning on the bottom – with a cookie tray on the shelf below just in case it overflowed. Good thing too…. But after 30 minutes of baking, even though the apples are bubbling, the crumb topping is not golden enough after half an hour of baking. So now it is on the middle shelf under the broiler (with T monitoring to make sure it doesn’t burn). 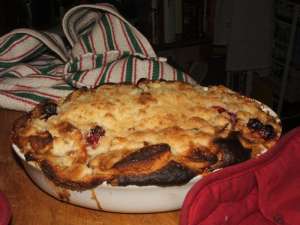 We didn’t have to wait long. Last night, about an hour after it came out of the oven, we sliced into it. As suspected, it was more like cake than bread. But the bottom bread section looked beautifully formed.

T loved it as dessert and said it was like apple cinnamon buns.

I confess that I was a little less enthusiastic. It was very similar to plum duff made with apples and cranberries instead of plums. Don’t get me wrong; I did like it. I just think it will work better for breakfast with coffee.

Here is the BBB December 2012 Holiday Apple Kuchen recipe provechoperu.com/2012/12/holiday-apple-kuchen-yeast-bread/. And here is what I did to it:

1.) Topping: Gretchen mentioned that she may or may not have doubled the crumb topping recipe because Gretchen reminded us that “crumb topping really is the best part”. So I made about three quarters of the recipe rather than half. Gretchen called for brown sugar rather than white.

3.) Yeast: The BBB recipe calls for “a package” of yeast. This kind of measurement drives me mad! How much is in a package?! In North America, it’s generally accepted that it’s about 7 gm – or 2.25 teaspoons. This time round, I used 1 tsp instant yeast (because that’s what we happen to have in the fridge). If it were active dry, I’d probably use the same amount.

4.) Creamy Topping: I ran out of steam and at the last minute decided not to make this. Even though I know it would be delicious. Gretchen calls for cream cheese, whipping cream and powdered sugar. When I still thought I was going to make it, we had neither cream cheese nor whipping cream on hand. I wrote down what I WOULD have used instead. 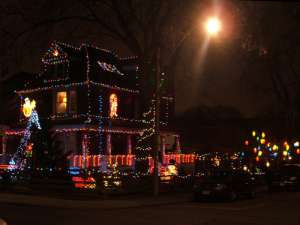 While we were waiting for Kuchen to rise, we hopped on our bikes to take a look at the neighbourhood Christmas lights. We LOVED this house! How brilliant. I hope you can get an idea from this less than adequate photo just how brilliant it was.

When we got home, the Kuchen was pretty much ready to bake. And then it was time for dinner (…leek and potato soup with baking powder biscuits). Mmmm, I do love dinner!

I wanted to do something special, but different. I thought about something difficult and labor intensive to finish off the year but knew that even I would have trouble with a challenging recipe. I wanted something, not necessarily “simple,” but a bread that would be delicious as breakfast or dessert. With all the holiday parties coming up, hopefully this can serve as a perfect dish to bring and share.

This recipe is with apples, but I will tell you the honest truth…if I had fresh cranberries around here, I would certainly be throwing in a couple handfulls to the apple mixture. If you want to try a different fruit, you are welcome to.

Gretchen is right! The cranberries look really beautiful and they add a lovely touch of flavour as well.

We know that you too will WANT to bake this Kuchen!! To receive a Baking Buddy Badge to display on your site: bake Holiday Apple Kuchen in the next couple of weeks and post about it (we love to see how your bread turns out AND hear what you think about it – what you didn’t like and/or what you liked) before the 29 December 2012. If you do not have a blog, no problem; you can also post your picture(s) to Flickr (or any other photo sharing site) and record your thoughts about the bread there. Please remember to email the Kitchen of the Month to say that your post is up.

Please take a look at the other BBBabes’ Kuchen: 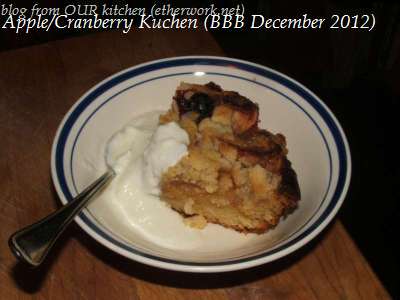 Please don’t forget to look at my

(Don’t even think about peeking ahead!