summary: about our feast of baked beans, smoked pork, green beans and biscuits (with links to our recipes for ‘pork and beans’ and ‘old bay seasoning’)

This post is for Sheryl Kirby (Taste Toronto) to show her that I bear no hard feelings…. 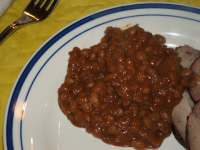 Our diet plan is in full swing. Celery sticks were not on the menu. But baked beans were.

To tell the truth, we were not really contemplating beginning dinner with some celery sticks – not that there’s anything wrong with celery sticks. But even if we had wanted to, amazingly, we had run out of celery. (This actually is rather strange. We generally have celery in the fridge for making stocks, stovetop dressing, etc.) So we dove right into the main course. And what a main course it was!!

Now that the snow is gone from the patio, T finally has easy access to the barbecue. He rubbed Old Bay Seasoning on a piece of pork shoulder and began slow roasting it in the barbecue with hickory smoke.

But I’m jumping the gun. I started this post so I could brag about my contribution to the evening. (Surprising as it might seem, I actually cooked part of the dinner!)

Last week, we realized we hadn’t had baked beans in eons. Very odd. We love baked beans. The more we talked about baked beans, the more we wanted to have them.

But not so much that we would settle for canned beans! Please not canned. While I have fond memories of Libby’s deep brown beans, I know in my heart of hearts that the canned beans just don’t stack up to homemade pork and beans. Sure it might be a bit easier to just reach into the cupboard, open up a can of beans and plop them into a pot to heat up. But making them from scratch isn’t really that much more work. And the resulting beans are so much better.

The recipe I use is based on one in WINNERS – More Recipes From The Best Of Bridge. It is a real 1960’s type recipe, calling for molasses, ketchup, Worcestershire sauce and ball park mustard.

I must say I am not very fond of ketchup. But it is an essential ingredient in pork and beans. So is mustard. But I can’t quite bring myself to use ballpark mustard; I substitute grainy dijon style mustard.

I began by foraging through the cupboard for dried navy beans, measured, sorted through, washed and started them soaking overnight. The next morning, I cooked the pre-soaked navy beans for an hour. Then I added salt to arrest their softening process, sliced some onions, and began mixing up some molasses, Worcestershire sauce, mustard and…

What?!? We had almost run out of ketchup too?! there were only a few tablespoons left! How can this be? Who would ever use up ketchup?

But no problem. I just made a note of how much I would have to add later and dumped the mixture over the onions I had put into the bottom of the biggest casserole dish we have. Then I poured the beans over top, covered the casserole and stuck it in the oven at 250F.

We headed to the market to get the pork, bacon (yes, we had foolishly run out of bacon too), a vegetable and ketchup (Heinz® please, accept no substitutes). We forgot to get celery.

When we got home, I gently stirred in the rest of the ketchup, lay bacon pieces on top of the beans, covered them and stuck them back into the slow oven. Six hours of cooking is about right. And the aroma wafting from the kitchen!! You don’t get that when serving canned beans. 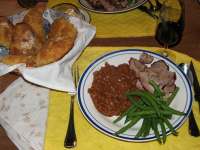 (click on image for larger view and more photos) After the beans were done and out of the oven, T pulled out the stops and made biscuits. We steamed some green beans, poured a couple of glasses of San Giovese and sat down to our feast.

Moan! It was delicious! Forget the celery. Can we have pork and beans again please?

Here is our recipe for

2 responses to “What? No Celery Sticks?”