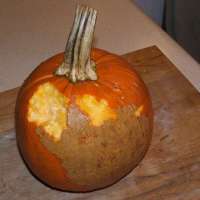 This “pie” pumpkin (at least I thought it was a pie pumpkin) was left outside on the porch for about twenty minutes before bringing it inside to carve it. Squirrels had ALREADY started feasting!!

Because we bought pumpkins on Hallowe’en Day itself, many stores had zero pumpkins left. And the ones that were left were in a sorry state.

T’s pumpkin was insanely spoiled on the back – mushy, in fact. That pumpkin was left outside in the back garden for about an hour and no squirrels came near it….

It was also quite unwilling to stand upright without a little help from a folded newprint prop.

On my little pumpkin, I decided to carve two faces – one on the front and one on the back. I used the squirrel gnawed areas as guidelines for vent holes. 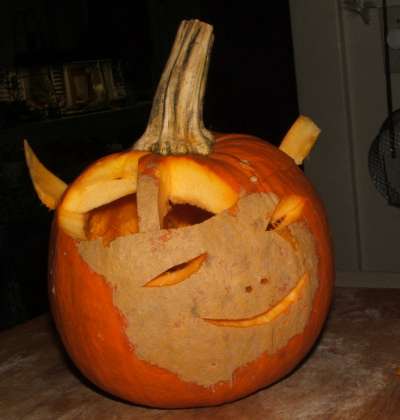 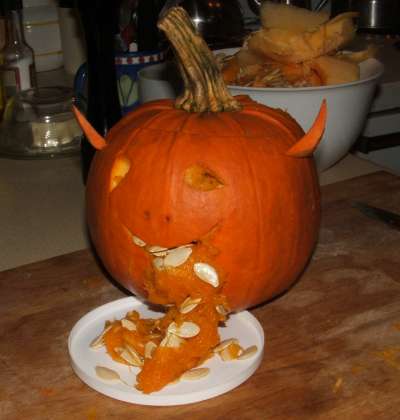 As soon as I cut the pumpkin open, I realized that this was NOT a pie pumpkin at all. It was an immature Hallowe’en pumpkin – the tasteless thready watery kind. At first I was going to use it anyway to make muffins. But then I decided it was only good for the garden compost.

These are the muffins I was going to make:

Carrots, beets and/or sweet potato can be used in place of the pumpkin

Serve immediately with freshly brewed tea or coffee! Don’t forget to put the butter, cream cheese and/or goat cheese on the table.

If I’d known about the Sorauren Park Pumpkin Festival, I’d have taken the little pumpkin over to join the throngs there. (Not the big pumpkin though. By late Hallowe’en night, it was already furry and white inside. Ewwwwww!!) 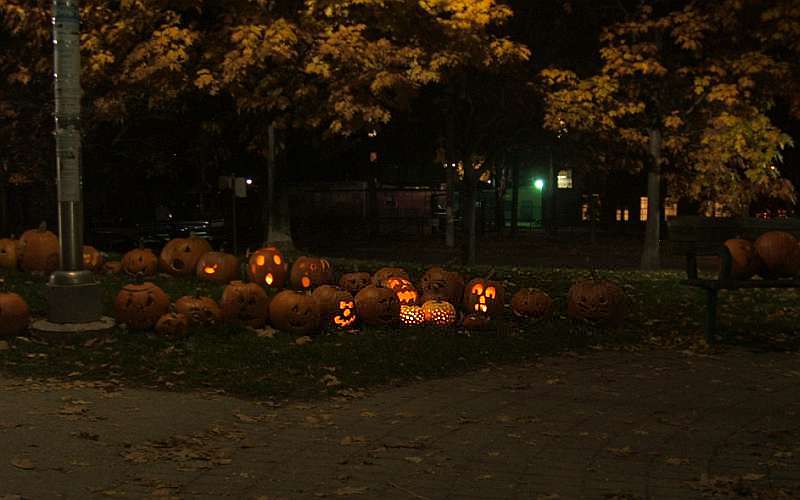 1 response to “what to do with Hallowe’en pumpkins”