summary: brown lentils and smoked sausage are perfect with ensaimadas; wordpress is exploding – be careful what you ask for!! (click on image for larger view and more photos) 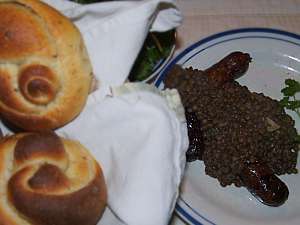 UNblackened ensaimadas with lentils and home-made smoked sausage are as fabulous as expected. Yes, ensaimadas got a huge thumbs-up from T, who said they were a combination of the best characteristcs of Parker House rolls and croissants. 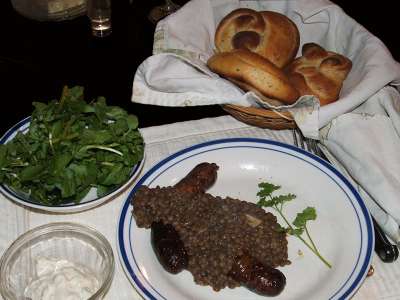 We had some watercress in the fridge and decided to serve it simply with a blue cheese mayonnaise dressing.

The sausages were homemade and SMOKED!! Yes, there was a small window last week when it was above freezing for two or three days. This was enough time for the snow around the barbecue to melt. We were absolutely thrilled to be able to use the barbecue again. (I’ll post more about exactly what T did to make the sausages soon!)

Did I mention that dinner was delicious?

(Yes, Katie. Before you ask, we filled our glasses with an inexpensive but delicious Italian red, Casal Thaulero Sangiovese.) 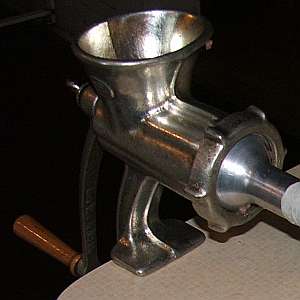 A few months ago, we received this wonderful meat grinder in the mail from T’s parents’ house. It is from the 1950s and apparently (according to the kitchen supply store downtown) is far superior to similar meat grinders being made today. (We got the sausage attachment in Chinatown.)

Ohoh… Be careful what you wish for!! I recently asked to have PHP5 and now wordpress is going crazy. Eeeeek!!!