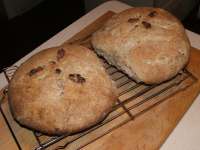 I do love bread! It really is the staff of life, don’t you think?

As far as I’m concerned, every day is bread day. We invariably have buttered toast each morning for breakfast. Sandwiches are not uncommon for lunch. Bread is often the starch we choose to go with dinner. (A crusty French-style loaf is wonderful with stews and soups; cubes of older bread make great stuffing for roast chicken or croutons for salad; corn bread is a must with chilli; one really can’t have palak paneer without naan or chapatis!) And if there’s no dessert made and someone neeeeds dessert? Cinnamon toast!

Even though we like so many different kinds of bread, when I heard that Zorra (kochtopf) had chosen an open theme for World Bread Day 2007, I didn’t have any difficulty deciding what bread to feature. I knew exactly what I wanted to bake: walnut raisin bread with wild yeast.

Interesting that last year I chose a raisin bread for WBD 2006 too! There’s just something about raisins in bread! Bread without raisins is good, no doubt; but bread with raisins is too good. As long as the raisins are the small dark raisins rather than the larger golden raisins. Golden raisins are too big and puffy for bread.

And how did I come to this decision to bake walnut raisin bread? In September, my sister-in-law sent me some of her bread recipes, including her favourite: “walnut raisin bread” from Beth’s Basic Bread Book by Beth Hensperger. I had already had an idea that I was going to have to try making walnut bread after reading about it in Nancy Silverton’s Breads from the La Brea Bakery but realizing that raisins could be added clinched it. I really liked that it was a multigrain bread as well. This is right up my alley – especially for the fall! There’s something about the cooler weather that calls for a stronger bigger tasting bread.

There was only one small hitch. My sister-in-law’s recipe calls for commercial yeast. Nancy Silverton’s recipe appears to be quite complex, requiring 3 days of preparation! (I do like her book but it really doesn’t seem to be aimed at the kind of home baker I am. It’s all I can manage to remember to mix the starter one day before baking! Same day bread is really more suited to my scattered temperament….) But again, I really wanted to use my wild yeast that I captured using the recipe in Piano Piano Pieno by Susan McKenna Grant. (read more about capturing yeast)

So I winged it once more for how to make the alteration from commercial yeast to wild yeast. I’m still fighting a bit with how much to allow the bread to rise (I’m pretty sure that I am letting it over-rise) so the resulting bread was a little bit on the flat side. But still I was pretty pleased and I can really understand why it is my sister-in-law’s favourite bread. I only wish she lived closer so I could take a loaf over to their house next time I bake this recipe! 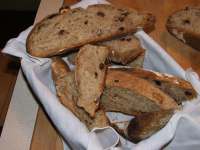 On the day I baked this bread we served it with a grilled chop, mushroom cream sauce and steamed broccoli.

By itself, the bread has a decided sour aroma – not overpoweringly so but I would like to lessen it. With sweet butter, or cream sauce, the sourness disappears completely and the other hidden flavours of the bread stand out beautifully. There is a nuttiness not just from the walnuts and a sweetness not just from the raisins. It really is stellar bread and imagine how good it’s going to be when I remember to turn the oven on early enough so it doesn’t over-rise!

It is equally wonderful for dessert with cheese. And day-old bread can be sliced thinly, drizzled with olive oil and made into crostini. Slather the toasts with herbed olive-oiled goat’s cheese. It’s almost so good this way that I have an urge to make a loaf specifically to be kept over for a day just to make crostini!

To reheat unsliced bread, turn the oven to 500F for 5 minutes or so. Turn the oven OFF. Put the bread in the hot oven for ten minutes.

*Tap water is fine to use – just make sure that it has stood for at least 12 hours so that the chlorine has dissipated.

** Hensperger’s recipe is a “same day” recipe calling for 2½ c warm water and 1½ Tbsp active dry yeast, a pinch of granulated sugar instead of honey and walnut oil instead of pumpkin seed oil. Otherwise, the rest of the amounts in the recipe are the same.

*** Please note that even though a Canadian cup holds 250ml, I always measure flour with my half cup measure, which holds 120ml. (Why is the half cup not exactly half of a cup?? I have NO idea. Maybe the Canadians who were setting the measuring cup standards had difficulty with fractions in school…)

Zorra (Kochtopf) is hosting WBD again this year and is inviting food bloggers to join with her in another celebration of bread. Any bread fits the theme: yeasted or not, plain or fancy, homebaked or storebought.

The original World Bread Day – an event created by UIB International Union of Bakers and Bakers-Confectioners – wants to provide an opportunity to talk about bread and bakers, to find out about their history, their importance as well as their future.

Let’s bake and talk about bread on this day again! Everybody is cordially invited to participate.

The deadline for posting is Tuesday, 16th October 2006 (There is short grace period: only until Wednesday, 17 October 2007). For complete information on how to participate in “WBD 2007”, please see:

Also, if you haven’t already, do take a look at

On a more serious note, today is also World Food Day. Not too long ago, I talked about hunger. But it cannot be stressed enough that unlike us privileged few, there are many in the world who go hungry. Please remember to do what you can to end world hunger.
edit 23 October 2007:
Zorra has posted the WBD 2007 roundup. There were so many entries that she has divided the roundup into 4 parts:
This post is mirrored on