On Thursday, with two more days left in September, we realized I could bake one more batch of wild bread this month.

Because these organisms [the ideal types of yeast for sourdoughs] always grow on the outside of a fruit or grain, whole grain flours containing the bran will have a much higher microflora count than will white flours, which have very little bran. […] [A] sourdough starter made with white flour will be slower to develop than would one made with whole-grain flour. – Maggie Glezer, “Unraveling Sourdough”, Artisan Baking Across America

Aha! I KNEW there was a good reason that I have insisted on using whole wheat flour to create and feed our starter!

And it is lovely and active. So, naturally (no pun intended), we want to use it to make bread! Because, after all, people were making bread long before jars of commercial yeast were readily available to the general public. And, of course, people continued to make lovely bread without commercial yeast after that time as well.

This recipe comes from The Ladies Indispensable Assistant, 1850.
To Make Good Yeast Take as many hops as you can hold in your hand twice; put them into three pints of cold water; put them over the fire, and let them boil twenty minutes: then strain the water into an earthen or stone jar, and stir in while the water is scalding hot flour enough to make a stiff batter: let it stand till about milk-warm: then add a tea-cupful of old yeast to make it rise, and a tea-spoonful of salaeratus dissolved in the old yeast; stir it well and put the jar in a warm place to rise. Some add Indian meal enough (after it has rise well) to make it into cakes and dry it on a board in the sun. This is very convenient, especially in hot weather, —a small cake soaked in a little warm water is enough to make a large pan of dough rise.
Salaeratus (alternative spelling for “Saleratus”): Aerated salt; a white crystalline substance having an alkaline taste and reaction, consisting of sodium bicarbonate.

– Candice Speare Prentice, The Borrowed Book | Making Yeast in the 1850s
It was Louis Pasteur in 1859 who first discovered how yeast works:
• Yeast feeds on the starches in flour, producing carbon dioxide
• The carbon dioxide expands the gluten proteins in the flour
• The gluten proteins cause the dough (of which flour is a main ingredient) to expand and rise
Nine years after Pasteur’s discovery, Fleischmann’s® Yeast was founded, and the modern baking era was born.

– Breadworld, History of Yeast
Commercially produced yeast first appeared in the United States in the 1860s. Charles and Maximillian Fleischmann, immigrants from Austria-Hungary, with the financial backing of James Gaff, patented and sold standardized cakes of compressed yeast (S. cerevisiae) produced in their factory in Cincinnati. By the early twentieth century factory-produced live cake yeast was widely available.

– Andrew F. Smith, Oxford Encylopedia of Food and Drink in America
Active dry yeast was developed by the Fleischmann’s company during World War II so that the U.S. Army could make bread without keeping yeast refrigerated. Partially dehydrated and formed into granules, it contains dormant yeast cells that keep at room temperature for several months. […] Instant yeast (aka quick-rise yeast) was first manufactured in the 1970s.

– Fine Cooking | The Science of Baking with Yeast
If you already have an active sourdough culture in you refrigeratior, you willneed to refresh it with fresh water an dflour eight to twelve hours before you want to bake. […]
Until commercial yeast for bakers was invented at the end of the nineteenth century, […] all bread was raised with yeast captured and cultivated in a simple mixture of flour and water. For at least two thousand years, people routinely and exclusively used this mixture, commonly known as sourdough, to make bread.

– Daniel Leader, Local Breads, p26&41
I have successfully converted our plain naan recipe from one using commercial yeast into one that is raised with wheat levain that took just 5 days to create. I have great hopes that more bread recipes – calling for commercial yeast and converted to using wild yeast – will follow.

– me, converting recipe for wild yeast to one with domestic yeast (and vice versa)

So, here I am, armed with our bubbling natural starter made with 100% whole wheat flour, going full circle, having grown up with using active dry yeast for bread-making. Sometime near the end of the last century, I found a source (expensive…) of fresh yeast and tried it. I liked it but it was so expensive! I also tried instant yeast (by mistake because I didn’t read the label correctly at the supermarket) around that time. Aside from the brief disastrous sour sour flurries with wild yeast in 2007 and again in 2012, I’ve been firmly attached to using active dry yeast. I had no idea until I was beginning to write this post that active dry yeast didn’t appear on supermarket shelves until after 1945!

Because we feel certain that most people in Asia probably DON’T use commercial yeast to make naan, we thought that would be a perfect one of our recipes to alter back to its original state.

Naan […] originates from Central Asia […] [I]n India it is round and mostly made in a tandoor. At Vij’s, we don’t use a tandoor to bake our naan and it is a labour-intensive process. Since it’s not easy to make naan at home, we suggest you buy it premade from Indian grocers.

Vikram Vij and Meeru Dhalwala, “Vij’s Elegant & Inspired Indian Cuisine”, p.16
Naan is a leavened flatbread shaped like a teardrop. It is best when cooked in the clay oven called a tandoor.

-Madhur Jaffrey, “Invitation to Indian Cooking”, p.251
Naan […] is the Central Asian word for “bread”. In South Asia, it has come to mean the leavened tandoor-baked flatbreads that evolved from the breads brought to the Subcontinent by the Moguls.

I did make wild naan a couple of weeks ago, but it was before I had grasped the need to make sure the starter floats.

Late on Thursday night (around midnight) I put a spoonful of culture from the fridge into a smallish bowl and stirred in equal parts (by weight) of whole wheat flour and water. I covered the bowl with a plate and put it in the oven with only the light turned on.

Yesterday morning, as we were making coffee, I checked to see if the starter was floating. With Julia Child’s sage words “you are the boss of that dough” echoing in my head, I stirred in a little more whole wheat flour and water. So we could have coffee at our leisure.

After coffee, I checked for floating again. Bingo! It floated. So I mixed the dough and over the course of the next couple of hours, folded and turned until the dough was beautifully soft and silky.

Then I made what might have been an error. I put the covered bowl into the fridge.

I haven’t quite gotten used to the kitchen not being stinking hot and humid…. I checked the dough at around 17:00 and it hadn’t budged. Oh oh!

Into the oven, with only the light turned on, it went. And, miracle of miracles, it had almost doubled by 19:15 when T went to turn on the barbecue. I shaped the dough into six naans. T placed them directly on the grill, closed the lid, and a few moments later when he opened the barbecue to check on the bread, we were thrilled to see that every one of them had puffed. Whoohooooo!

I’ve said it before and I’ll say it again: making naan is NOT a labour-intensive process. It’s one of the easiest breads to make – with or without commercial yeast. And it’s even easier to make if it’s baked directly on the grill of a gas barbecue (they are also easy to bake in a conventional electric oven).

That’s right. While a tandoor would be fun to have, it’s not at all necessary… when he was living in India, T ate plenty of delicious naan that had been baked in tandoors. He says that our naan is easily as good as those he ate in India and Pakistan. (He would have liked to have tried naan in Afghanistan too but when he was in that area, Afghanistan was closed.)

Here’s what I did to make wild naan:

We think these naan are the best we’ve ever made! We served them with stir-fried apples, Swiss chard and cauliflower greens, and butter not-chicken (using left-over grilled pork). Dinner was wonderful!! 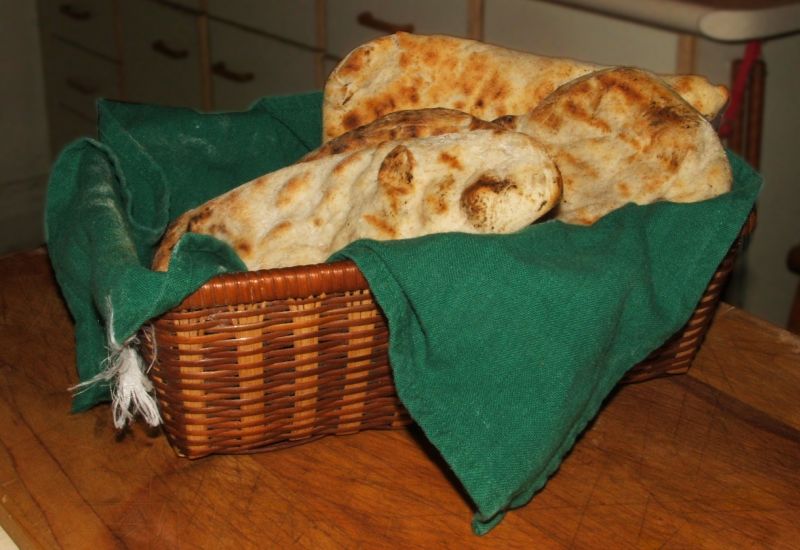 Converting a Recipe Calling for Yeast to Use Wild Yeast

[…] (Obviously there is no need to use a sponge starter, as the sourdough starter provides all the flavor needed.) You can also replace the biga (and yeast) in a recipe with equal volume or weight of stiff sourdough starter.

– Rose Levy Beranbaum, “Sourdough”, The Bread Bible, p439-440
i) Pick the recipe you would like to bake, note the amount of fresh yeast that is called for and double it to get the amount of [natural starter] you need. Weigh this out in a bowl.
ii) Take 25% of the flour that is called for in the recipe and put that in the bowl too.
iii) Take half as much water as you took of flour and put that in the bowl. […] Mush it all together with your hands, cover it and leave it overnight or all day on the counter. Write down how much flour and water you used because you will need to subtract that from the total amount called for in the recipe and use the balance the next day.

-Jane Mason, All You Knead is Bread, p48
“[B]read dough is made by combining 1 measure of 100% starter (= a starter that’s fed an equal weight of flour and water at every meal), 2 measures of water, and 3 measures of flour — all measures understood in weight. […] When I want to convert a recipe that uses commercial yeast, I aim for that same starter ratio: I add up the total weight of water (and any other liquids) and flour (or flours) in the dough, and estimate that I’ll need 1/6 of […]

– Clotilde, Chocolate & Zucchini, Tips and Tricks: Converting Yeast-Based Recipes To Use A Sourdough Starter
I usually use about 25% of the total flour weight for the starter when I’m converting a recipe to sourdough. Some people use 20%. […] However, what I’ve been doing recently that seems to bring good results is to feed my starter so that it’s fresh, then I incorporate 125 grams of the starter into the final dough and let the dough rest for 5 hours before the shaping and final proof. This method has worked well for me.

BREAD magazine listed “nine ideas to make [our] September full of sourdough, bread… and fun!” In my excitement to “bake, bake, bake”, I managed to check most of them off. And when T announced we would have butter chicken and naan for dinner, I knew that it was an opportunity to fulfill Nos.3, 8 and 9 on the list:

BREAD is an independent magazine for bread lovers, made by bread lovers. At the crossroads of home baking and professional artisanal baking, BREAD is an entertaining and inspiring journey that invites you to build meaning and deeper connections through bread. […]