summary: recipe for wild popcorn bread, based on a recipe in “Buttermilk Graffiti” by Edward Lee; extremely late entry for Cook the Books (CtB)

The popcorn bread, which I came up with because I love the tiny bits of detritus at the bottom of a bag of popcorn, reminds me of Irish soda bread, with a slightly nuttier flavor. – Edward Lee, chapter 2: The Pugilist and the Cook, Buttermilk Graffiti, p.42 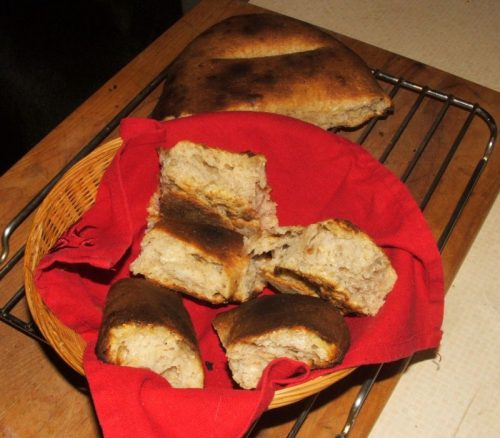 We’ve only just now finished chapter three of Edward Lee’s wonderful book, Buttermilk Graffiti. Note that we’re slow not from lack of interest, but because we want to savour every well-chosen word.

The ice in my whiskey is melting fast, but I don’t mind. I hang on every word [Jack Brady] says while his hand sits on my neck. Bono is blaring away on the jukebox, and the Red Sox game is on the TV. I light Jack’s cigarette, and as he exhales, the last sunlight of the afternoon coming in through the tinted window catches the plumes of smoke like a scen from an old black-and-white movie.

The plate of food has never been the be-all and end-all for me. Quite the opposite: for me, good food is just the beginning of a trail that leads back to a person whose story is usually worth telling.

Suddenly, however, when we got to the recipe for Popcorn Bread at the end of chapter two, our pace picked up.

Edward Lee’s popcorn bread recipe has quite an old-fashioned feel to it, calling for volume measures only, and using terms in the instructions like “punch down” and “cover with plastic wrap”. (In retrospect, perhaps the “punch down” is there as a nod to the former boxing champion, Jack Brady.)

It also feels a little labour intensive at the beginning, with the instruction to heat the milk and water “gently to 112°F” then stir in yeast and sugar(!!) and “let stand for 10 minutes, or until foamy”. With such prominent best before dates on yeast containers now, who proofs yeast in advance any more? Not to mention that it is generally accepted and acknowledged that there is zero reason to add sugar to yeast to activate it. The natural sugars in the flour will do the trick.

But we really liked the sound of the ingredients! …except the sugar.

We were all set to make Tartine fougasse that day – the leavener was ready to go. But while drinking our morning coffee as we sat on the front porch, after reading about the popcorn bread, we knew we HAD to make popcorn bread. But because it’s so hot right now, we’d turn it into fougasse and bake it in the barbecue.

We raced into the kitchen, got the popping corn and air popper out. And, armed with calculator (why oh why are the ingredients measured by volume??), we set to work. 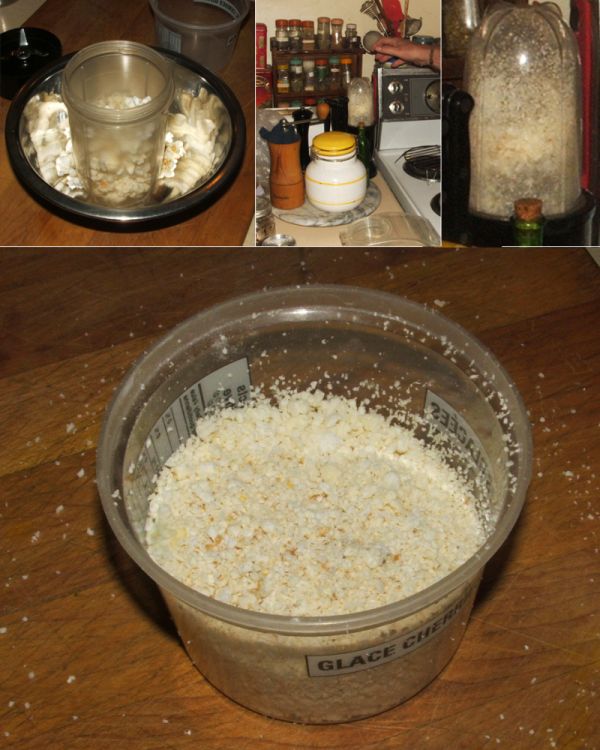 Here’s what we did to Edward Lee’s recipe:

:: flours: Edward Lee’s recipe calls for using only all-purpose flour and crushed popped corn in the dough. Because our starter is made with 100% whole wheat flour, I made an executive decision to build it up with whole wheat flour (to mimic hand-milled flour). I also added wheat germ because of suspecting that not all the wheat germ has been added back to the commercial flour we buy.

:: leavener: Edward Lee’s recipe recipe calls for quite a lot of commercial yeast. Our Jane Mason starter is just too good to allow to languish in the fridge, so I altered the recipe. The leavener was made with a 100% hydration starter. It takes about 5 days to create and happily resides in the fridge after that – our starter has been happily bubbling away and raising fabulous bread since July 2017. (Please see our take on Jane Mason’s Natural Starter made with Wheat Flour.)

:: egg: For the next times we make this bread, I don’t think we will add the egg at all. I detected a slightly eggy taste in the crust of the fougasse. If the dough seems to dry, I’ll simply add a little more water. (Apparently, an egg’s volume is equivalent to 60ml).

:: salt: Edward Lee’s recipe only has volume measures, and the recipe for 2 loaves of bread calls for “2 teaspoons salt”. Volume measures are sort of okay for flour and water. But for salt, considering the different coarseness of grind for each kind of salt on the market, it makes little sense.
The ideal salt concentration in a dough is 1.8% (baker’s percentage). […] [A]ny type of salt is OK for breadmaking. Large salt crystals take up twice as much volume as fine crystals. Weigh salt using the baker’s percentage system for accurate measurements. – Lisa Rayner, Wild Bread: Hand-baked Sourdough Artisan Breads in Your Own Kitchen, Dough Basics, p. 69
Typically the amount of salt in a dough is between 1.8 and 2 percent of the amount of flour, by weight. If there is a large proportion of other ingredients, such as seeds, for which salt also enhances flavor, the percentage of salt could be a little higher. – Susan Tenney, Wild Yeast | The Role of Salt in Bread

:: shape: Edward Lee shapes his bread into loaves and puts them into greased bread pans. We have bread pans. But we should probably give them away. We never use them any more….

Also, please note that the oven instruction is speculative. We haven’t cooked this bread in the oven yet.

:: topping: The recipe at the end of chapter two in Buttermilk Graffiti omits this step entirely, but it appears in Lee’s Food52 recipe for Popcorn Bread that appeared before the book was published. Lee calls for “artificial movie theater butter” in the Food52 recipe!! {Brrrrrr} I DON’T think so… I didn’t like Golden Topping when it first appeared and I loathe it now. However, actual butter is great on popcorn and, for me, the smell of real buttered popcorn is just as evocative.

Baking in the barbecue always presents a few challenges. There is the risk that there may be more char marks than hoped for. However, even with those few blackened parts on the crust, the bread still really did smell like popcorn! And it’s not quite the same as cornbread. But it’s delicious! 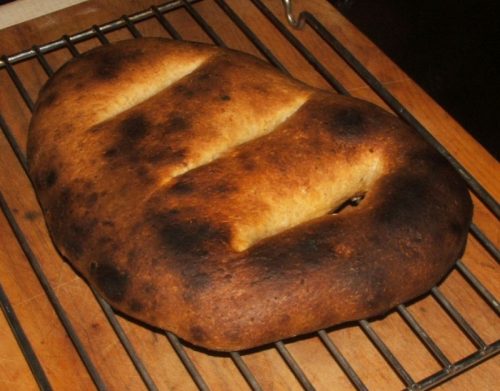 Charred or not, this bread is a keeper.

Although. We probably won’t add egg again – I kept tasting the egg (T said he didn’t really notice the egg). The milk, bacon fat and butter will stay though. 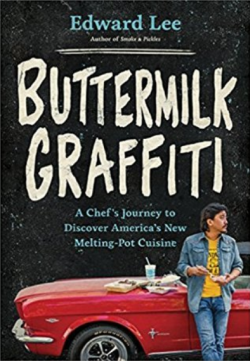 I want you, the reader, to trust your instincts and cook the way I know you are capable of. Having a recipe published with an accompanying photo is a pretty modern invention. We have been following recipes without photos for centuries. When we don’t know what the end result is supposed to look like, the imagination is allowed to roam free and we come up with our own conclusions. […] Having said that, if you really want to see what the dishes look like, you can find pictures of them at chefedwardlee.com

It wasn’t until the day after we baked the popcorn fougasse that I went in search of photos of Edward Lee’s Popcorn Bread and found one at Food52. 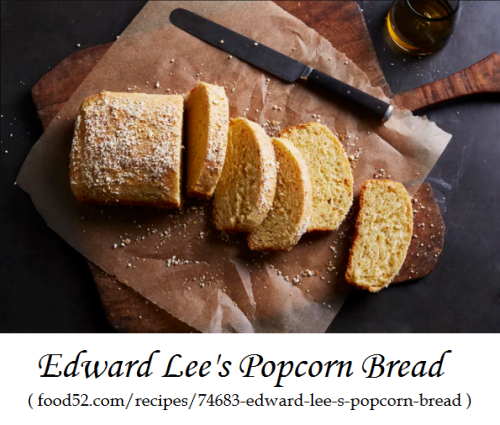 Ha!! We certainly did let our imagination roam free, didn’t we?

But, even if we had seen a photo, we still would have omitted the step: “Grease two 8½-by-4½-inch bread pans” and completely changed the shape of the bread to bake it pretty much free-form. We would also have changed the flour ingredients and switched to using wild yeast rather than commercial yeast. 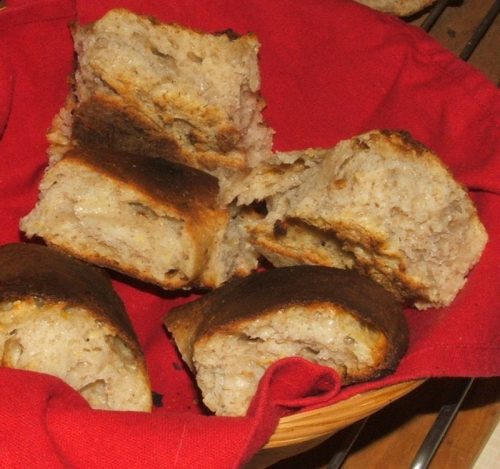 So. What do you think? Is our version still the same bread?

Debra, Deb, Simona and Claudia are food-loving friends who also love to read. They take turns hosting this bimonthly book club/blog event that “focuses on a different foodcentric book each round”. The goal of the club is to discuss the chosen book and cook something inspired by reading it.

Remember that anyone can participate in Cook the Books: simply pick up a copy of the selection from your local bookstore or library, take inspiration from said reading, cook and post the inspired dish. We look forward to having you read and cook along with in this selection period and beyond. New participants are always welcomed with open arms!

-Simona, Cook the Books, June/July selection: Blood, Bones & Butter
Buttermilk Graffiti by Edward Lee […] Lee traces his own food comforts and influences. Along the way he establishes connections for all Americans as he travels the country looking for a national cuisine — “that tension between two vastly different cultures creates something new” […] Deadline for contributing your post is Friday, May 31, 2019.

I do know that Deb’s selection of “Buttermilk Graffiti” by Edward Lee was for Cook the Books in April/May 2019 .

But this wonderful book is our current “read-aloud” book. Even though we’ve only just gotten as far as chapter three, I thought I’d post about the Popcorn Bread anyway. After all, I’m already well past the deadline….

For more information about Cook the Books, please see: 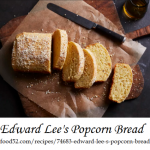 by: Food52 | December 16, 2017
[…]
This is a variation of cornbread that is light and nutty and nostalgic. I was eating a bag of popcorn at a local farmers market here in DC and I realized how much I like the little granules that end up in the bottom of the bag. They are tiny and salty and crunchy and remind me of eating popcorn in movie theaters when I was a kid. I got the idea to grind the popcorn into a course meal and use that as a base to make a loaf of bread instead of cornmeal. It makes a crumbly bread that feels like cornbread but it is lighter and fluffier on the inside. To make the movie theater memory more pronounced, I actually brush the tops of the bread with movie theater butter—that fake stuff that every movie theater uses on popcorn—it has that unmistakable artificial butter smell that actually makes me nostalgic.
When making this bread, don’t overwork the mixture. It should just come together in your hands. Also, it is important to use an organic popping corn. They taste a lot better than commercial popcorn. Eat and serve right away. It is best when warm. If it cools down just reheat in a low oven for 5 minutes or you can pop it in the microwave for 40 seconds.
[…]
Excerpted from Buttermilk Graffiti by Edward Lee (Artisan Books).

– Edward Lee, Food52 | Edward Lee’s Popcorn Bread (this was written before Buttermilk Graffiti was published, and does not actually appear in the book.)

The phrase “it is important to use an organic popping corn” really seems to clash with the instruction to slather the top of the just baked bread with “artificial movie theatre butter”, doesn’t it?

It doesn’t seem at all surprising that this ingredient is omitted in the recipe on page 42 of “Buttermilk Graffiti”.

But I do like the idea of brushing the top of the loaf with actual butter and sprinkling with extra crushed popcorn just before putting the bread in the oven. Surprisingly, this step does not appear in the book.