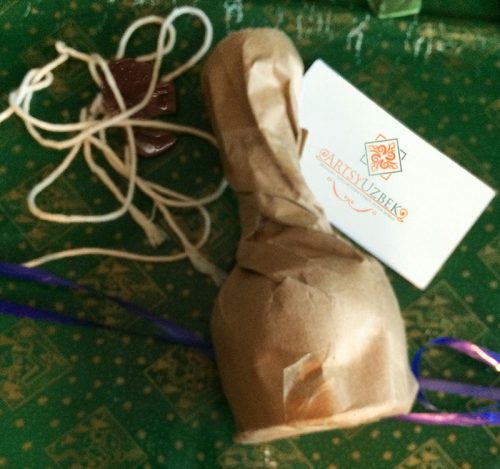 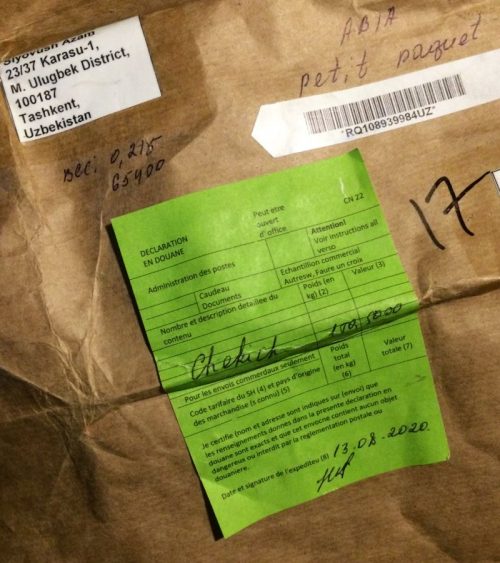 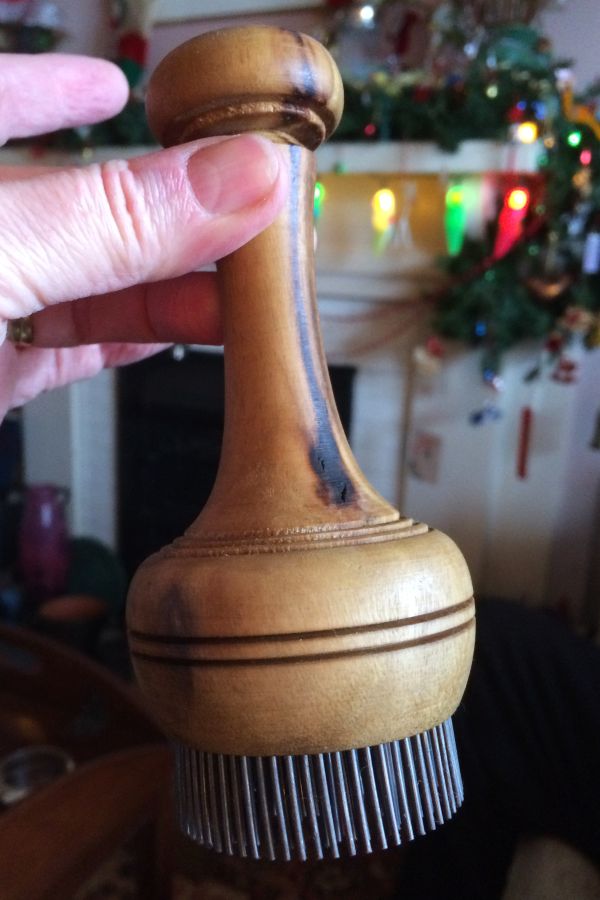 summary: bread making essentials; inspired by reading “Samarkand: Recipes & Stories from Central Asia & The Caucasus” by Caroline Eden, I constructed a homemade bread stamp; then: T gave me not one, but two bread stamps; I’m so excited to retire the homemade stamp, because we have two bread stamps now!

Immediately after reading about Uyghur bread, this is what we used instead of an actual bread stamp (aka chekich) – I made it with wooden skewers designed for mini-kebabs. 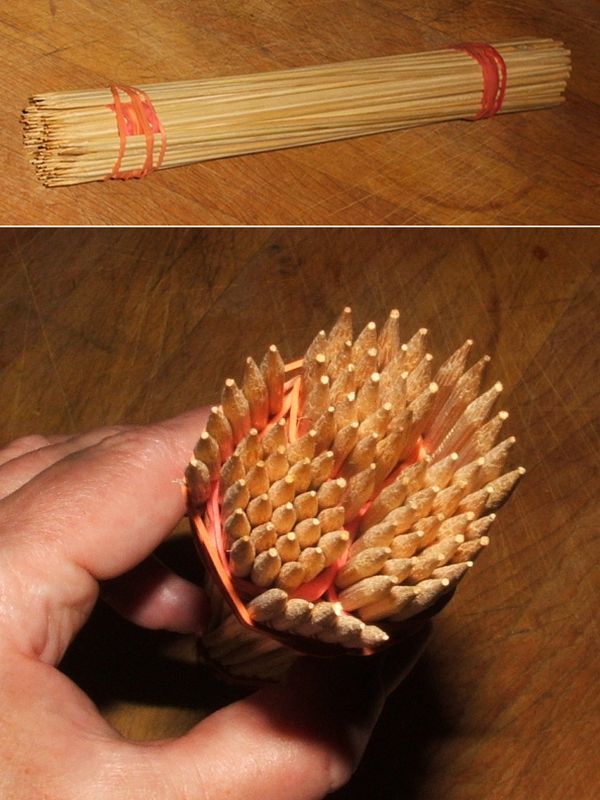 T said that almost immediately after he received this first bread stamp (the one with the flowers on the handle) for me this summer, he ordered another one because he didn’t know he wasn’t ordering a plain wooden handle, nor did he know what kind of stamp pattern was being sent. He immediately ordered another one with a fancier pattern and a plain wooden handle. He said it took ages to arrive (more than 2 months…). 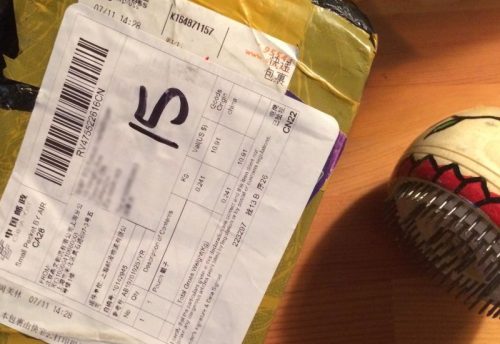 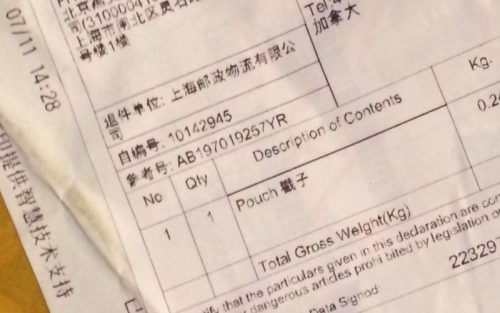 So HERE’s why the customs sticker on the package for the bread stamp said “pouch”! They meant to type “punch”….

In their more traditional version, flat breads are naturally leavened by sourdough […] Before baking, the dough discs have to be pressed with finger-tips or punched to prevent excessive expansion in the oven. Punching can also serve a decorative function and helps identifying the baker, such as in the Uzbek non, in central Asian breads chorek and lepeshka, and in the Saudi tamees. The punches are called chekich in Uzbekistan, where they are used together with bread stamps called bosma. In Turkmenistan and in the Xinjiang Chinese region, mostly Uyghur, these punches are named durtlik. 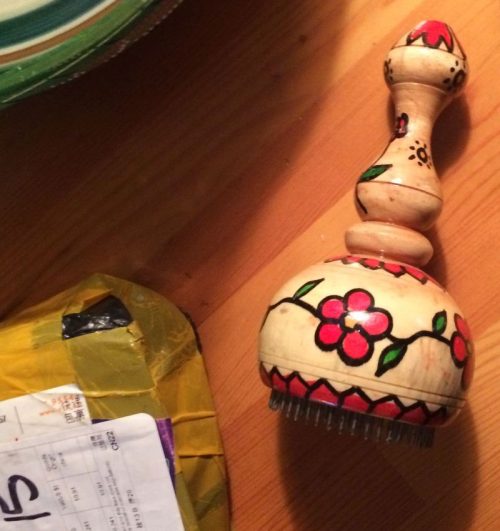 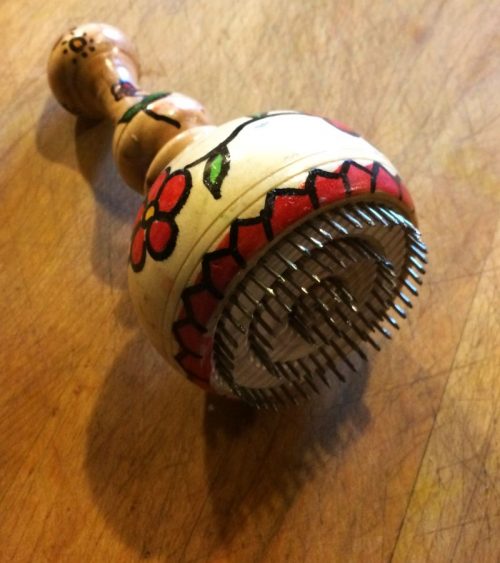 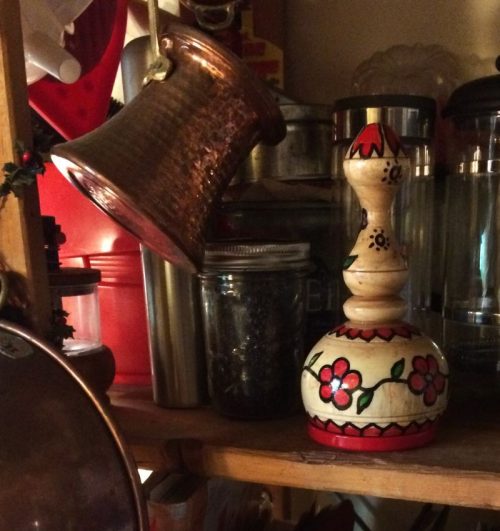 We love how the breadstamps look on the shelf in the kitchen! 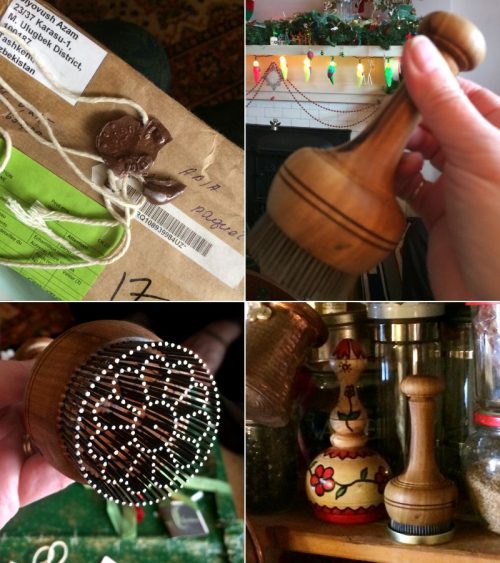 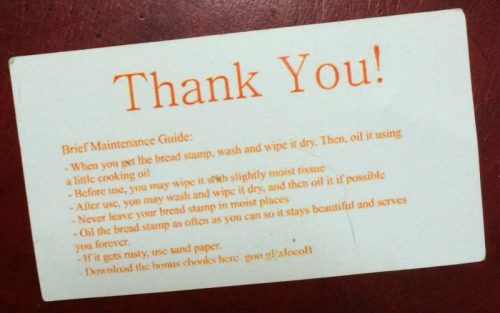 Oil the bread stamp as often as you can so it stays beautiful and serves you forever.

I must say that I love that we have two different stamp patterns: one simple, and one ornate(ish). I am also very glad to not feel compelled to use the homemade bread stamp. It did work. But it was a bit of a hassle to keep together. 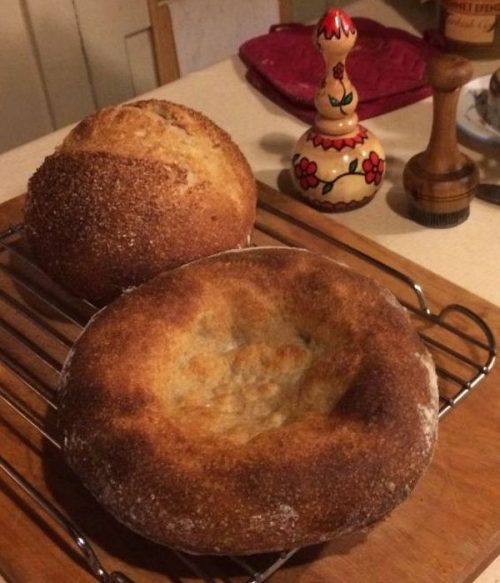 Samarkand—the turquoise city
For centuries, the fabled city Samarkand has been a magnet for merchants, travellers, and conquerors. Its name resonates like those of only a handful of other ancient cities, perhaps Babylon, Rome, or Jerusalem. Say it out loud and it rolls off the tongue: Samarkand. It is seductive.

– Caroline Eden and Eleanor Ford, Samarkand, p.7
Non is the flatbread that is made the length and breadth of Central Asia. Is is usually baked by being slapped onto the searingly hot clay walls of a tandoor oven. […] Make an indentation in the middle of the bread by pressing with the heel of your hand, leaving a doughnut-shaped ring around the edge. Pierce a pattern in the middle using a non bread stamp or the tines of the fork. 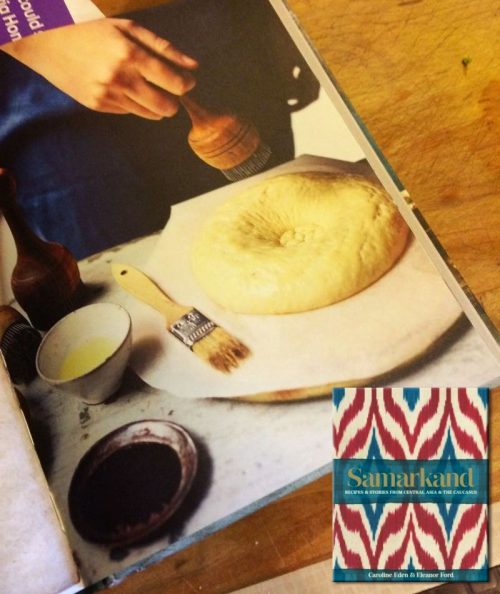 Samarkand: Recipes and Stories from Central Asia and the Caucasus, p.153
by Caroline Eden and Eleanor Ford
Photograph in book by Laura Edwards