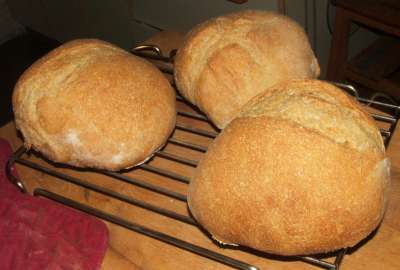 summary: I love it when it crackles! I love it even more when the crumb is shiny! How did I achieve this? I think it was because I used a thermometer to measure the water temperature, ensuring that it was 90F; submission for Bake Your Own Bread (click on images to see larger views and more photos)

As I suspected, others before Ken Forkish have already tried to tell me about the importance of the water temperature when mixing bread dough. Of course, Rose Levy Beranbaum was one of those people:

[B]elow 70°F, and the flour will not absorb water (hydrate) evenly, and that will affect the consistency of the crumb. […] The optimal finished temperature is considered to be 72° to 78°F for doughs made with wheat flour. If rye flour is 20 percent or more of the total weight of the flour, the finished temperature of the dough should be 82°F. This higher temperature strengthens the network of gluten in the wheat flour, ensuring that it is strong enough to support the rye flour. […]

I call for warm water in some recipes and room temperature water (70° to 90°F) in others. I don’t watn to risk anyone’s adding too hot water (above 120°F which would kill the yeast) or cold water which would not activate it fully.

I dutifully used 90F water to build the starter to make this Caraway Rye Bread. However, when mixing the final dough, I did not take into account that I would be adding vital wheat gluten from the freezer and our room temperature (around 60F) flours from the cupboard. Consequently, the final temperature of the just mixed dough was only 70F – and still markedly warmer than it has been in the past.

Happily, even though the final mixing temperature was on the low side, the resulting bread was stellar. See?

What a shame it is that there is no way to display the spectacular aroma of this bread as it came out of the oven AND as it was being sliced. 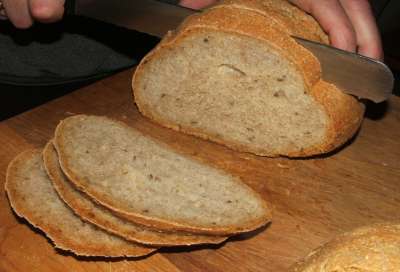 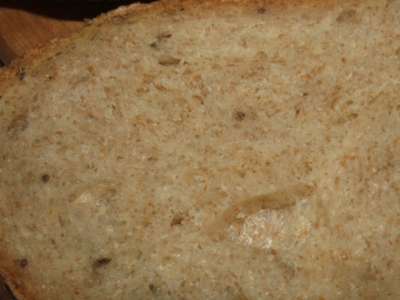 It was particularly thrilling to see this shiny crumb!

There is a sheen to the crumb of breads made with fully developed pre-ferments. This shiny crumb is a visual sign of good bread, and I often look for it before I smell or taste breads.