Slow load or no load? Please go directly to the video

I know; that video does make you speechless, doesn’t it? Temporarily speechless, anyway….

Being the verbose person that I am, I find myself incapable of remaining wordless. Besides, it isn’t Wednesday.

When I first saw this ad on TV, I was certain it was a joke. But there it was on the Food Network, earnestly assuring me that I’d never have problems cracking eggs again. Shrieking hysterically at the TV (it’s so embarrassing to shriek at the TV), I yelled, “Just how hard IS it to crack an egg?!”

Bonjour, mesdames et monsieurs. Yesterday we have learned the correct way how to boil water. Today we will learn the correct way how to crack an egg. Voila! An egg. Now, an egg is not a stone; it is not made of wood, it is a living thing. It has a heart. So when we crack it, we must not torment it. We must be merciful and execute it quickly, like with the guillotine.

It is done with one hand. Kindly watch the wrist. Voila. One, two, three, crack! You see? It is all in the wrist.

And now, everybody, take an egg.

I practiced for weeks to get it right… (if only I practiced and studied useful things as diligently). I confess that over time, I forgot the “one, two, three, crack”. I usually give one sharp rap (sometimes two) then crack the egg open. 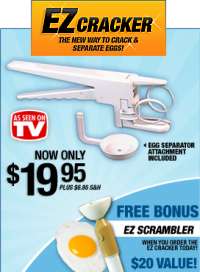 Egg-citing commercial, thanks for sharing, made me laugh!

Glad to be of service, Ron. -Elizabeth