summary: I don’t like what is happening to SAVEUR magazine; questionable word choices for articles about food and drink: devour, gobble, mushy; Goan shrimp curry; (click on image(s) to see larger views and more photos)

Is my love affair with SAVEUR coming to an end? (I’m seriously considering the idea of not renewing my subscription when it next expires….) 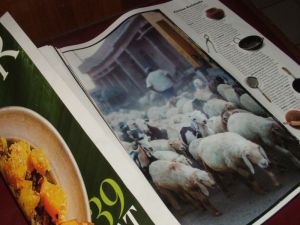 I just finished reading the most recent SAVEUR magazine, The India Issue. And I’d like to have a word or two with them about what is going on there.

We were really excited when we saw the front cover and couldn’t wait to read the various articles. T was especially thrilled, hoping to relive some of the wonderful memories of his time in India and learn how much it has changed and/or remained the same.

The India Issue
Special Issue #167 is a love letter to India – its diverse landscapes, people, and of course, incredible food.

– SAVEUR.com | The India Issue
From remote tribal villages to frenzied capital cities, in India, food is life’s organizing principle. For this issue, we traverse the massive subcontinent, from east to west, from south to north and northeast, along the way dipping into restaurants and morning markets, the home of a nomadic herdsman and the palace of a raja, a wedding and a glossy movie set. […] The journey into India can start with just one curry, one dal, or one lassi. Come along with us.

As we read through the magazine, we were more and more disappointed. The articles were short, almost to the point of briefness and few held any magic, but were simply reports about what kind of food people eat in various regions, rather than a glimpse into life in that remarkable country and an unspoken invitation making the reader want (neeeed!) to experience it personally. 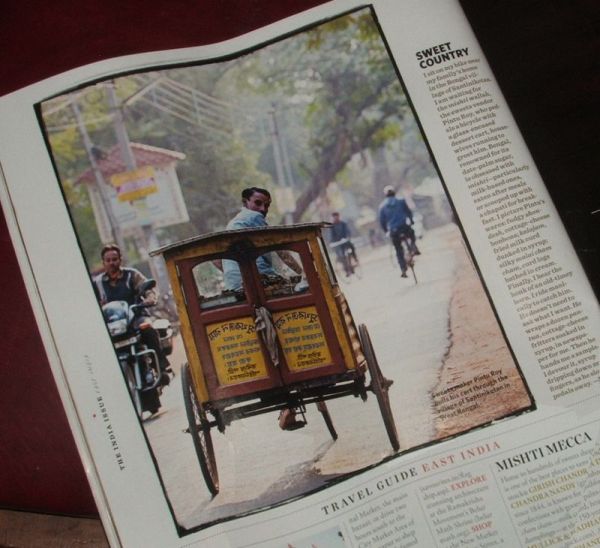 Let me hasten to add that there are some beautiful photos. I particularly like Kelly Campbell’s portrait of a sweets vendor in Bengal. Even though it was printed backwards in the magazine… ooops! I guess the editors forgot that they drive on the left side of the road in India. (The aspect has been corrected online.)

And, of course, there are a couple of exceptions with the writing (brief though each article still is) such as Betsy Andrew’s “Just Before Dawn”, Santanu K. Acharya’s “The Scent of Zanzibar”, Madhur Jaffrey’s “The Heart of South India”, Indrani Sen’s “The School of Small Bites” and “Sweet Country” (how very surprising that neither Naomi Duguid nor Jeffrey Alford were included in this issue, considering the tremendous amount of travelling they have done in India and their poetic writing about it).

Alas, it seems clear that SAVEUR’s editors are buying into the regrettable current trend to keep their articles as short as possible.

But that’s another story. To continue giving credit where credit is due, there are also several very interesting sounding recipes (particularly one for Sembharachi Kodi (Goanese Shrimp Curry) – remind me to rave about it).

However, it is not the briefness of the writing that got me started here. The proverbial straw was seeing yet another instance of the word “devour”. It’s a little too close to “gobble”.

Neither “devour” or “gobble” are exactly the words I would ever choose or be pleased to hear in connection with any real dining experience. But it appears that I am alone. The editors of SAVEUR magazine have been allowing the use of both these words more and more. They are especially fond of “devour”. And they don’t seem to be trying to offend anyone!

But really, don’t both these words immediately conjure up images of thoughtless louts jamming food haphazardly into their mouths, barely pausing to chew and swallow? They are hardly words to be used to describe someone enjoying and savouring a carefully planned dish.

I remember devouring a plateful on a folding table in our big empty dining room, and telling my husband that these were the finest meatballs I’d ever tasted. -Dana Bowen, A Welcome Meal, Greatest Meals Ever September 2010 (SAVEUR No. 132)

The Minnesota State Fair is the last word in things served on sticks, offering more than three dozen impaled edibles: a class of food that is ideal for gobbling while walking among crowds. -Jane and Michael Stern, Fair and Square, Bring on Summer!, June/July 2012 (SAVEUR No. 148)

[Y]ou can sit down and devour a delicious Cincinnati-style GLT (goetta, lettuce, and tomato). -Keith Pandolfi, Cincinnati: Diner City, May 2013 (SAVEUR No. 156)

A warm feeling washes over me as I devour the pie with a fork and knife, as locals do. -Keith Pandolfi, The Gold of Naples, May 2013 (SAVEUR No. 156)

[W]e slathered the rich, pungent spread on biscuits and devoured them, already thinking of next month’s lunch. -Brett Burmeister, ‘Greg Higgins’ in The Saveur 100, December 2013 (SAVEUR No. 162)

The place is a chocoholic’s dream, with candies in every shape and size arrayed on shelves and tables and trays, ready to be gobbled one by one, or by the handful, as the case may be. -Jane and Michael Stern, Welcome to Candy Land, Sweet, Juicy & Fresh, March 2014 (SAVEUR No. 163)

I once loved the dish so much, devouring zesty forkfuls of it. -Keith Pandolfi, Special Sauce, The Seafood Guide, April 2014 (SAVEUR No. 164)

It is a living link to glory days when ordinary New Yorkers devoured oysters by the bushel at market stands. -William Grimes, Book Review: Oysters for the Ages, Best Outdoor Cooking, June/July 2014 (SAVEUR No. 166)

Use your fingers to scoop up a small portion of food. Pinch the food between your fingers and thumb, forming a loose ball. Devour. Repeat. -Saveur editors, ‘Hands On’ in The India Issue, August/September 2014 (SAVEUR No. 167)

It’s gotten to the point now that when I see “devour” or “gobble”, I actually find myself shuddering and wondering exactly what if dining with these people would be like a free-for-all. Would they shovel everything in and then sit staring at me because my plate would still be filled with delicacies?

Now that I’m being hypercritical, there is one more questionable word that I noticed turning up in this issue’s recipe instructions for cooking dahl. It’s “mushy”.

I don’t know about you, but I cannot stand mushy dahl. I’m not sure I know anyone who can. Nor can I think of anyone who would seriously suggest cooking dahl until it was “mushy”. But again. I appear to be alone:

[C]ook, covered slightly, until dal is mushy, about 20 minutes.

Reduce heat to medium; stir in turmeric and cook until dal is mushy

[C]ook until dal is mushy, about 45 minutes

I can imagine “no longer crunchy” or “just soft, but still holding its form”. And if “mushy” must be used, I might add a cautionary note: “Be careful not to overcook, or the dahl will become unpleasantly mushy.” 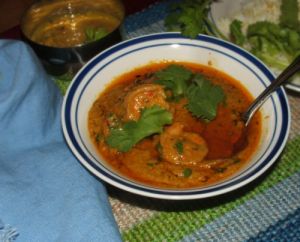 Speaking of not-even-remotely-mushy dahl, we had the most spectacular moong dahl last night; it was cooked to perfection – soft but not too soft. And because we were celebrating the south of India, T added curry leaves and a tiny bit of dried coconut to the dahl along with the usual onions and dried chillies fried in butter. He made it to go with green beans masala (remind me to tell you about that!), SAVEUR’s Sembharachi Kodi (Shrimp Curry) and steamed rice, all garnished with plenty of coriander leaves.

We set the table and giving thanks, sat down to the feast, taking our time, breathing in the wonderful aromas, savouring every bite. No gobbling. No devouring.

Dinner, as usual, was fabulous!