Not long ago, T was watching Paula Deen on Food TV – he gets perverse pleasure waiting for her say “awl-leave ole“….

She was making Southern style biscuits. Apparently, they looked fabulous and he announced that he was going to try making them and could I prepare the yeast.

Yeast? In baking powder biscuits?? How weird is that?

But who am I to argue? I adore biscuits and as skeptical as I was that the yeast would make a whit of difference, I didn’t think it could harm them!

So down to the kitchen we went and T watched as I checked the water temperature by pouring it over my wrist and then dumped it into the 2½ tsp(!) yeast that Ms. Deen calls for in her recipe. I was still very skeptical, but decided that 2½ tsp yeast wasn’t that much to basically throw away.

Because Paula Deen’s recipe for Biscuits is quite similar to our recipe for buttermilk baking powder biscuits, instead of following the Deen recipe, all T did was add yeast and a bit of sugar to our recipe and used shortening and only all-purpose flour rather than the mix of whole wheat and all-purpose and olive oil and butter or shortening that we usually use. (…as tempting as it was to add olive oil just so he could drawl out “awl-leave ole”

) And so, with the yeast safely bubbling in its little bowl, I left him happily measuring, stirring and gently clattering.

Not long afterward, the aroma of just baked biscuits summoned me to the kitchen.

Well colour me amazed! The biscuits were unbelievably light and fluffy. They were pretty delicious too. They reminded me a little of Parker House rolls. (I used to love Parker House rolls but haven’t had them in years.)

But we thought the yeast flavour was a little too prominent. And I thought there should be just a little whole wheat flour in them. Even so, the biscuits were terrific with fried chicken, collard greens and onion gravy….

A couple of nights later, T made the biscuits again, to go with goulash. This time he used quite a bit less yeast and added some whole wheat flour. Fabulous!!

I still can’t believe that the yeast doesn’t get killed immediately. However, I’m convinced. I want yeasted baking powder biscuits every time now.

Serve hot. They are great with goulash or fried chicken and onion gravy or butter. They are also wonderful for breakfast with butter and maple syrup, honey or apricot jam. 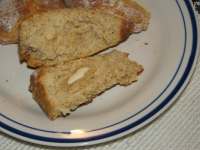