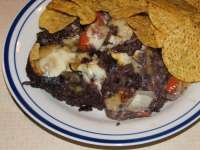 The other day when I was raving about beans, I was flabbergasted to see that we didn’t have a photo of one of our staple dinners, refried beans casserole.

Easy remedy! Because I absolutely adore refried beans casserole! Of course, some people will say that it looks like dog’s breakfast. But shut your eyes or dim the lights and dig in. It’s fabulous!

I have no idea if it is even remotely close to anything you would get in Mexico. But does it really matter? It’s fabulously good.

I don’t do a whole lot of the day-to-day cooking but this is one thing that I do cook. And even if I’m saying it, it’s something I do really well.

I’ve been making this for eons, around the time that I moved to Toronto. I can’t remember where I read to add oregano and onion to the beans. I have a vague recollection of sitting in the Metropolitan library and painstakingly scrawling out the instructions from a slim volume in the closed stacks.

When I first started making this casserole, I put the corn chips in the bottom of the dish, because that’s how I’d always seen nachos being served. But relatively early on, when I started making it for the two of us, we decided it was nicer to have the corn chips remain crispy. So they are now always served on the side. To really crisp the chips, put them in the oven for the last 10 minutes of baking the casserole.

I generally cook a huge quantity of the beans and then put them in the freezer. Then on the days that T doesn’t feel like cooking, we can pull the beans out of the freezer for me to mash them and refry them.

One of the things we’ve noticed is that it’s much more satisfying if the beans are really dry AND cooled before being cooked with the vegetables in the casserole. It’s also a good idea to cook the casserole for about 30 minutes WITHOUT any cheese so the vegetables can release their steam instead of letting it be trapped under the cheese to create a gooey overstewed mess.

The other thing is to coarsely chop the vegetables. Really. The other night, this is how the conversation went:

he: (grabbing an onion) Do you want me to help chop the vegetables?

me: Sure, if you want (grabbing the onion back). Why don’t you do the mushrooms. In quarters. No smaller. (peels onion)

he: (flash of steel as the huge lethal blade chop chop chop chops through the mushrooms) Do you want me to help you? (sniggering at knife technique on other side of board) You’ll never get anything done with that small knife!

me: (slices onion in half) I’m fine, thank you.

he: (flash of steel as the huge lethal blade chop chop chop chops through the banana pepper) Are you sure you don’t want me to help you? You’ll never get anything done with that small knife!

he: Give me the onion! I can chop it finer in no time! (tries to grab the zucchini)

me: They’re fine. That’s how big they’re supposed to be. (rescues the zucchini) So is the zucchini. You can chop the tomato. Not too small!!

So there’s my secret out. I’m incredibly slow. I use a ridiculous small (but horribly sharp) knife because the larger bladed knife has a handle that is too large for my delicate little hand (cough). And I’m incredibly lazy. It’s much easier to chop the onion and zucchini into largish chunks than to finely dice them. 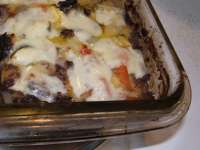 And here’s the thing. The casserole is WAY better. The vegetables don’t get over-stewed and end up being sweet tasting, some of the pieces holding more texture than others.

And you know what? You know what?? The vegetables were perfect! Especially the onions and zucchini.

A few hours (or more) before you are going to make the casserole, sort (to remove stones) and wash the beans well. Put the washed beans in a big pot and cover with fresh cold water. Remove any beans that are floating. Add oregano and a little chopped onion. DO NOT ADD SALT. Bring to a boil. Immediately turn down to a low simmer. Simmer about 1 hour partially covered. After about 40 minutes of cooking, check to see if beans are the consistancy (in terms of softness) you like. If not, simmer a little longer. When they are the right consistancy, add salt. This stops the beans from getting much softer. Remove from heat.

In a heavy skillet at med-high heat put vegetable oil and powdered cumin and powdered coriander. Cook for about a minute until you smell the cumin. Add beans and mash. (Sometimes I use a hand blender; sometimes I use the potato masher.) Add oregano, pepper and salt. Fry the beans, stirring often with a flat nosed wooden spoon. When you can see the bottom of the pan for a reasonable length of time (the whole thing will resemble a lava pool), the beans are ready. Pour into an ungreased pyrex casserole dish and set aside to cool on the counter – until it’s time to make the casserole.

* We like a half and half mix of pinto and black beans. But you can use any kind of beans you like. Beans can be soaked in plenty of cold water overnight as well. In the morning, remove any floaters, drain the beans, rinse and cover again with plenty of fresh cold water before cooking. The beans that float are damaged slightly and may contain the enzyme that will cause gut pain. The same goes for the soaking water. The amount of nutrients lost by discarding the water is negligible (or at least that’s what I think).

* Canned beans can be used as well. Drain and rinse the beans first. The liquid in canned beans is often a bit stinky, murky, and oversalted.

My Legume Love Affair
I haven’t forgotten about this event! But once again, while this COULD be a starter and qualify for Courtney’s (Coco Cooks) April theme of “starters and desserts”, it’s not. (I don’t think I’d be capable of having it as just a starter… unless the second course was more refried beans casserole!)

For complete details on how to participate in My Legume Love Affair (MLLA), please read the following:

1 response to “yet another favourite: refried beans casserole”