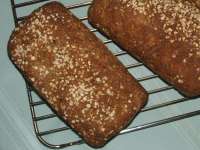 I love our multigrain bread. In fact, it is my choice for sandwiches and toast. But with the price and general unavailability of rye flour, I’ve been fooling around with substitutions. Sometimes I’ve use a mixture of rice and rye flour, sometimes a mixture of corn and rice (and zero rye).

I’ve also been adding a little less yeast. It’s possible that I may have gone too far the other day. 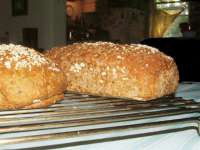 I think these are the flattest loaves I’ve produced in a while! The photo doesn’t actually quite show just how flat the loaves are.

Especially when you consider that because the bread has been turning out on the flat side for weeks now, I decided to make 2 loaves rather than the usual 3. The bread should have been insanely tall.

Was I mad? Was I upset? Well, let’s just say that I was having a lot of trouble with producing a smile to be my umbrella for the tears. Or something.

BUT. There is a silver lining in this dark cloud. (Oh please. Make me stop with this cutesy metaphor…).

[time passes as I go to wash lettuce for salad]

As I was shaping the bread (that granted, was on the slightly wet side), I suddenly decided to sprinkle it with oatmeal rather than sesame seeds.

What a good decision that was! The oatmeal lends a beautiful flavour. Slightly cinnamonish. And slightly toasty. So pleasing that it makes me forget that my bread is flat as a pancake.

Here is the recipe: 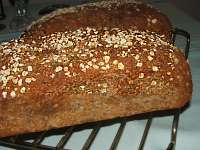 Okay, maybe the loaves aren’t quite as flat as I claim. And the oatmeal topping really is stellar. Note to self: always use oatmeal rather than sesame seeds for the topping on multigrain bread.

I still don’t know quite what it was that I did wrong. Was it the shaping?? Or did I not let the shaped loaves rise enough before baking them. I do know that the dough wasn’t over-risen before being shaped.

What do you think? 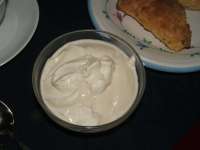 Some people might think that the clotted cream in the photos for fully dressed scones (real food) didn’t look thick enough. And maybe they were right. Because we loved the scones so much, we had them again. And this time, we made added a little more goat’s cheese so that the “cream” was firmer. The flavour was just as stellar.

Hmmm, I wonder if this would be good slathered on flat multigrain bread….