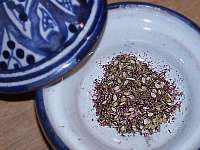 We just finished reading Anissa Helou’s really wonderful book “Mediterranean Street Food”. We’ve tried a number of the recipes and still have so many recipes bookmarked!! One of the bookmarked recipes is Manaqish bil-Za’tar (Thyme Bread) on page 88.

We read about it on the night we were having fuhl, grilled eggplant, quasi-tabouleh (using left-over couscous instead of bulghur), beet salad and pita. Now, we COULD have rolled out two of the pitas to make Manaqish bil-Za’tar but we weren’t absolutely certain about the timing for the Manaquish. Everything else was ready; we were hungry! So instead, we just quickly whipped up the Za’tar part. And added a bit of olive oil to it to dip the pita into.

Oh my. Lovely. But then how could it not be? It has sumac in it. And thyme. And sesame seeds. 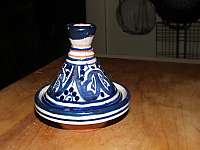 To enhance the experience, we put the za’tar into this beautiful tajine-shaped dish that friends got for us at a market in Morocco. Isn’t it amazingly beautiful?! And it’s the perfect size for serving za’tar. (I’d love to have a real tajine to make our Chicken with Dried Fruits!!)

Apparently, za’tar is available already mixed in middle-eastern stores. But why bother? Za’tar is insanely simple to make. Here’s how we did it:

Add this to olive oil and dip pita into it. We think it would also be very good as a spice-rub for meat to be grilled. Anissa Helou also suggests sprinkling za’tar on labneh by making Labneh bil-Za’tar. (Remind me to hang some yoghurt so we can try this!)

* We love the citrus-quality that sumac lends and so for the next batch of za’tar we will use less thyme (or more sumac…):
3 Tbsp thyme for 4 Tbsp sumac.

Interestingly, Gernot Katzer writes that in Jordan, za’tar is made with marjoram rather than thyme:

In Jordan, a spice mixture called zahtar (za’tar [زعتر]) is extremely popular; it took its name from a local species of marjoram which is one of its main ingredients. Since this West Asian marjoram is hardly available outside of the region, it must be substituted by a mixture of marjoram with some thyme or oregano. Zahtar, then, is made by combining the dried marjoram herb with nutty sesame seeds, acidic sumac, salt and optionally some pepper. – Gernot Katzer, Spice Pages: Sumac (Rhus coriaria L.)

Did I mention that Za’tar is delicious?

Apparently za’tar is also served with Haminados (hard boiled) eggs in Jerusalem. Amazingly, we haven’t tried this yet – I bet it would be fabulous.

Well, actually, I’m not sure that we’re going to try the Haminados eggs. Apparently, Haminados eggs are simmered with onion skins and coffee beans until the shells turn brown. I can’t imagine that the yolk inside wouldn’t be encircled with a wide ring of grey after all that cooking!!

But za’tar with regular hard boiled eggs would be great.

I know. I already wrote a review. But that was done before we’d finished reading it. Helou covers the whole of the Mediterranean, offering tantalizing descriptions and recipes from Spain, France, Italy and Greece – as well as Turkey, the Levant and North Africa. For us, it is the North African and middle-eastern recipes that really intrigued us. Simply because that cuisine is unfamiliar to us.

And this cookbook is full of fabulous sounding recipes. We have 29 of them specifically bookmarked to make NOW. And there are several others for soon afterwards. So far, the lablabi alone has been worth the price of the book.

But it’s not just the recipes that make this book a “must-have”. Helou takes us on a remarkable journey through the various markets throughout the Mediterranean. Interspersed throughout the book are stunningly beautiful black and white photographs.

Bread, of course, is the real staff of life, and nowhere more so than on Mediterranean streets. […] In Morocco it is still the custom to make bread dough at home and take it to be baked in the local bakery. If you walk through the medina around lunchtime, you will see young boys and girls carrying unbaked loaves on wooden trays and weaving their way through the crowd to the oven nearest their home. In the souks in Syria, people buy their pita bread ready-made, but you will see them spreading the hot loaves right on the pavement or folding them over ropes to cool before stacking it again. In Egypt the bread is carried in lovely wooden cages that the vendors balance high on their heads to carry through the narrow, congested streets of old Cairo.

If you can’t take an actual tour of the Mediterranean, you’ll want to take this virtual tour.