summary: Jamie Oliver’s Zucchini Ribbon Salad is great; bookmarked recipe; why did we wait so long? 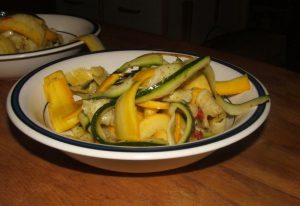 Way back in 2007 or 2008, when FoodTV still showed actual cooking shows and when we still had access to FoodTV, we saw Jamie Oliver making a spectacular looking zucchini salad. We instantly said that we had to try it. And promptly forgot because wasn’t yet zucchini season here.

Well. I’m happy to report that almost a decade later, we finally made the salad.

Now, salad-wise to go with this [fish]: the raw zucchini. […] They’re all quite young and they’re nice and crunchy […] Just peel them in […] to get perfectly thin slivers of beautiful courgette. And as it gets hard to peel, just turn it around and actually what you get left with is that little white fluffy center, which is sort of my least favourite part anyway [at this point Oliver discards the center into his compost bowl below] […]

He then dressed the zucchini ribbons with olive oil, lemon juice, salt and pepper, torn fresh basil leaves (Oliver says mint and a small amount of parsley can be substituted) and finely chopped seeded red chilli. He tossed the salad with his fingertips, making sure to cover everything with the dressing.

Oliver’s zucchini salad haunted me. Every time I saw zucchini at the market, I thought “we HAVE to try that salad!” This spring, I even planted zucchini – first yellow ones because those are my favourites. And green zucchini because that’s all they had left at the garden center when the yellow zucchini plant died. But even if the yellow zucchini plants had survived, to add insult to injury, a creature snuck in at night and ate ALL the flowers. Yup. This rotten too-hot, no-rain but humid summer was no good for zucchini in our garden.

I must say that it’s quite disheartening to be one of the few people who can keep neither mint nor zucchini alive. Don’t people complain about mint and zucchini taking over their gardens??

But. Our local Farmers’ market came through: late one Monday afternoon in July, I saw a basket of the most beautiful yellow zucchini. I chose one and as I paid for it, I told my woeful story to the vender. She commiserated, then as I turned to go, suddenly reached down under her table and pulled out another giant yellow zucchini squash. The top had been cut a little too close and she said, “Take this one too. I can’t sell it because of the top here. Just cut that off. The rest is fine.”

It was a sign. As soon as I got home, I rummaged through the utensils to get the produce peeler*. And adding a little bit of red Shepherd pepper and chilli flakes, and using mint instead of basil, we made the. Most. Brilliant. Salad.

It looked gorgeous too.

Why on earth did we wait so long?! 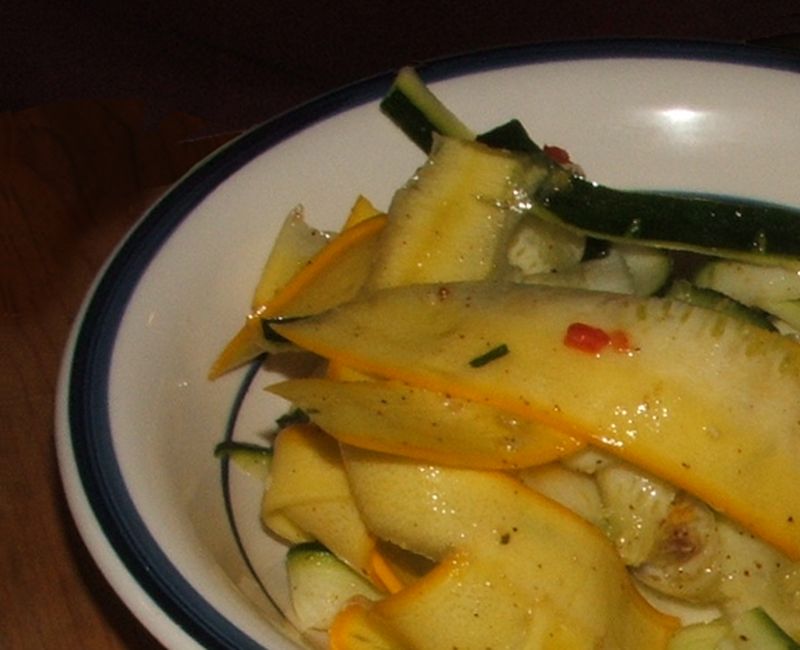 What’s in a name? – our Produce Peeler When my younger sister was taking home-ec in school, she came home and announced that her teacher (the same freak who told them there would “be no guesswork in our kitchen”) had pronounced to the class that they were NOT to call the peeler a “potato peeler” because that particular utensil is used to peel more things than potatoes. She told the class that they were always to refer to it as a vegetable peeler.

Well. Not that we really wanted my sister to get in trouble, we started to argue; we told her that she had to remind the teacher that people use peelers on fruit too and that the class should call it a “produce peeler”.

The other day, I was using our produce peeler to thinly slice cheddar cheese. Oh oh. Do I have to change the name again?