The photo for Della Fattoria's Polenta Bread in "Artisan Breads Across America" by Maggie Glezer was the reason I had to make this bread. As you can see from the photo below, my scoring needs work. A lot of work. Happily, that was the only thing wrong with the bread.

This bread calls for using cooked polenta in the dough and uncooked polenta on the outside and to score a spiral into the shaped bread just before baking. Alas, my scoring needs work....

The Glezer recipe is a sourdough recipe, calling for 20 grams of active sourdough. I have a horror of sour bread so decided to make a tiny biga to use instead. I mixed it in the morning and that evening, it was bubbling happily and ready to add to the starter.

Mixing the starter took no time at all. It too was quite small. I left it on the counter overnight and it had nicely doubled.

On the morning for mixing the dough, it took virtually no time to make the polenta that is to go into the bread dough. Once it was made, I spooned it into the lid of a casserole and stuck it in the fridge while I got the rest of the dough ingredients out.

Glezer says that if polenta is not readily available, cornmeal can be substituted. But we were excited when we saw this package of coarsely ground polenta at the grocery store. Or was it polenta? That's what it looked like....

Remarkably, there was almost no English on the label! The disturbing news is that the grain is from Ukraine (near Chernobyl...). The good news is that the grain is non-GMO. (We've decided that we're going to pretend that the Canadian government is looking out for us and would never allow us to consume radioactive polenta. But. We probably won't buy this kind of polenta again.)

Once the dough was made and mixed into a somewhat shaggy mass, it was time to knead in the polenta. This is easy to do by hand, directly in the bowl. One hand is used to steady and turn the bowl and the other hand acts like a claw to grab and squeeze the contents together.

Once the dough was kneaded, it still looked a tiny bit rough. I used a silicon scraper to clean the sides of the bowl and covered it. After an hour's rest and a few folds in the bowl, it was beautifully smooth and ready to cover and let rise until doubled.

Shaped... the dough was a little soft and floppy but otherwise lovely. Glezer suggests using the coarse uncooked polenta to line the baskets. I was afraid of breaking teeth so used ordinary cornmeal.

Risen and ready for the spiral cuts

Not exactly the smoothest of cuts, is it? This is more like a vicious circle than a spiral.

I decided to leave the one that had been in the brotform alone. I was surprised that the lines of the brotform didn't really show with cornmeal instead of flour as the liner.

Sigh. One of these days, I might manage to score bread well.

Luckily, in spite of its slight flatness and zero definition of its spiral, the bread was still quite toothsome and delicious.

The bread went fabulously with our festive garden dinner of grilled meat and peppers, steamed asparagus, cole slaw, herbs from the garden, and a lovely Tavel rosé

A couple of weeks later, I made the bread again, determined to get a decent spiral. I decided to put the shaped bread onto a lazy susan to get a steady turn on the bread as I cut the spiral. I was so disheartened by the ragged mess that I didn't take a photo.

I anticipated that the lazy susan method might not work and kept back some of the dough to turn into a rope to place a spiral on top of the second loaf rather than slashing it.

Thank goodness for post-it notes! The only thing wrong with "Artisan Baking Across America" is that the print is way too small and light coloured. I need a magnifying glass to read the recipes in Glezer's book. It doesn't help that it is printed on shiny paper that glares in the light. The following photo shows one of our favourite recipes in the book: Acme's Rustic Baguettes on page 30.

We don't know if it's simply because of practice that our bread is better than before or if it's because of this no-additive flour from B.C. we can now get. The only additives to the flour are the vitamins that are required by Canadian Law. Please see rogersfoods.com for more details. 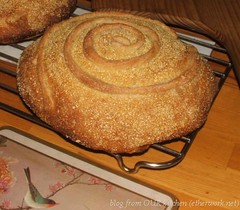