Coccodrillo (aka Crocodile bread), based on a recipe in "The Italian Baker" by Carol Field, was chosen as the second Bread Baking Babes' task in March 2008. Alas, it is extremely difficult to make by hand. Having tried to make it by hand three times: once in 2003, once in 2004 - before we had a camera, and now again in 2010. I think I will have to completely lose what's left of my mind before I attempt to make it again.

The dough is insanely slack. NO. Not slack. It's downright liquid. Unless you have lost your mind, don't try to make this by hand. (Do as I say; not as I do.) Use a stand mixer.

Closer view of the crumb: because I was unable (or unwilling) to stir the dough (ha!!) enough, the gluten didn't get a chance to develop enough. The crumb ended up being quite puddingy.

to blog from OUR kitchen:
Catching up: Coccodrillo once more (BBB March 2008) <<- recipe included in link

This shelf is reserved for bread cookbooks. As is clear, Carol Field's "The Italian Baker" is the one turned to most often (note all the bookmarks). 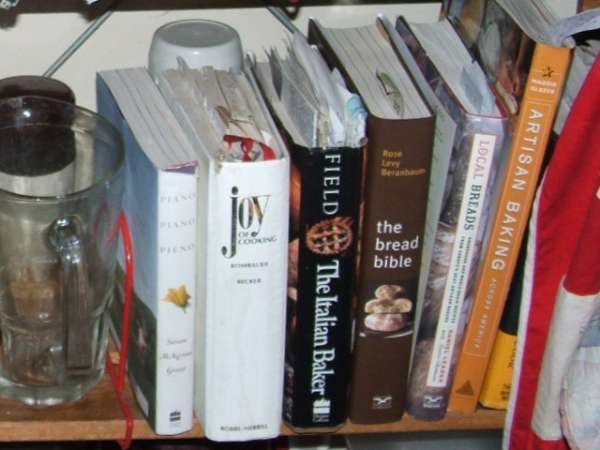