Based on a recipe in "A Passion for Bread" by Lionel Vatinet, these rolls shaped into a grape cluster were made with red wine rather than water added to the dough. The recipe calls for salami; we substituted with morita chiles.

The pattern left on the parchment paper is almost more interesting than the shape of the bread itself.

The recipe calls for salami; we substituted with morita chiles (smoked dried jalapeno peppers) chopped into the size of small raisins and added after the dough was first kneaded.

It took no time to fold the dough until the chiles were evenly distributed. Here is the dough (nasty liver colour, isn't it?) in the morning, just after mixing and kneading.

The dough took forever to rise! After 7 hours(!!) I did the finger test to see if it was ready to shape. The hole didn't budge and I decreed that it was but the resident expert nixed it saying to let the dough rise overnight.

Here's how it looked the next morning just before shaping. The gluten meshwork is apparent. So is the liver colour....

An hour after shaping, the rolls were sprayed liberally with water and immediately put into a preheated oven to bake with hopes that the colour would improve.

They probably could have been baked a little longer to really get them brown. But we were worried that they might burn.

Close up of the branch

Crumb was quite moist and the crust was not as crusty as desired. (They really should have been baked longer.)

We served the rolls with honey, butter and piave vecchio.

At 3 years old, the piave vecchio, supposedly best before 15 June 2012, was fabulous. 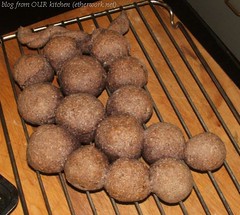 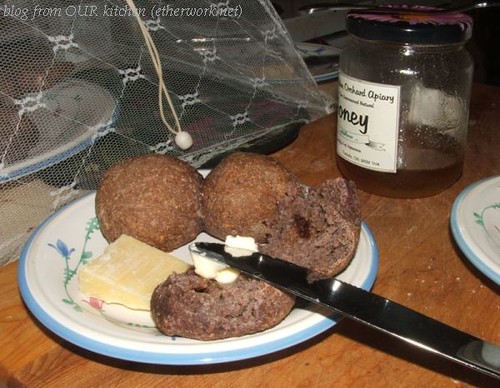