This Bangladeshi unyeasted crisp flatbread is made with flour, water, sugar, salt, ghee and mawa. The other BBBabes are not lazy; they made real mawa/khoya and ghee; I used instant mawa/khoya and melted butter....

Real mawa is made by gently boiling milk until it reduces. Instant mawa is made by mixing a small amount of milk and ghee/clarified (or melted butter) with powdered milk. To the unsophisticated palate, it tastes virtually the same as the real thing.

The mawa is cooled and then crumbled before being added to the dough for making bakharkhani.

The dough is made up of flour, ghee (or melted butter if you're lazy like I am), salt, sugar, crumbled mawa, water. Because I was already being radical by using butter instead of ghee, fake mawa, and a mixture of all-purpose and whole wheat flours rather than just plain flour, I threw caution to the wind and added a little ground cardamom as well. After kneading, the dough is left to rest for about half an hour and then rolled out very thinly. A small amount of melted butter in layered on top then the dough is folded. More butter and flour and the sheet is folded in half again. This is repeated one more time before the dough is rolled up like a jelly roll and left to rest for about ten minutes.

The dough is finally divided evenly.

Each piece is rolled out into discs. An expert bakharkhani maker achieves smooth discs rather than the rough ones pictured here, then, using a knife, scores each with three cuts.

The discs are then baked in the oven until crisp and golden. They are served warm with tea. Unless you live at our house and serve them with milky coffee.... 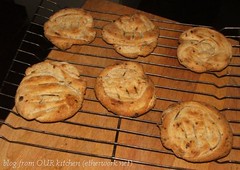 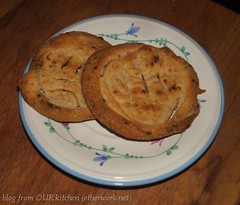