This bread is adapted from Elizabeth David's (English Bread and Yeast Cookery) version of Robert May's 17th century recipe for how "To make French Bread the best way", first published 1660 in his cookbook and memoir, "The Accomplisht Cook, or, The Whole Art and Mystery of Cookery".

The recipe calls for frothy egg whites. Because it's a French recipe, I thought it was fitting to use our French whisk to froth the egg whites.

To help me remember to add the salt, I like to measure it into the lid that will cover the rising dough.

Initially, I was planning to cover the loaf with a Fleur-de-lis pattern (commons.wikimedia.org: Fleur de Lis; Creative Commons Attribution-Share Alike 3.0). But it quickly became evident that we didn't have the right cutters. Instead, I rolled a small part of the dough into a disc and used one of these tiny cookie cutters to make a pattern.

After proofing the loaf, I was so pleased with the design that I decided to brush it with milk.

Then, because I can't leave well enough alone, I attempted to score the loaf using the tiny diamond shaped cutter.

To help with oven spring, I used the stainless steel bowl as a hat method for the first 10 minutes of baking. Not taking the milk wash into account, I didn't think it was necessary to grease the rim and insides of the bowl.... With a little wrestling and some kitchen sheers, I managed to keep most of the design intact. (The bread stuck to the edges tasted delicious - it was reminiscent of a chapati.)

The tiny diamond score was still visible - just -after baking!

How interesting that the peeled away sections did not really brown in the final 30 minutes of baking.

We loved how it looked when we turned the bread around. We couldn't wait to cut into the bread to hide the evidence of the peeled away design.

But, of course, we did wait. We left the bread to cool overnight and sliced it early the next morning.

blog from OUR kitchen:
Stepping Back in Time to the 17th century (BBB September 2014) <<- includes recipe 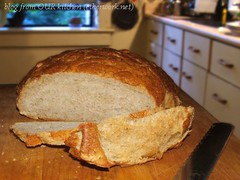 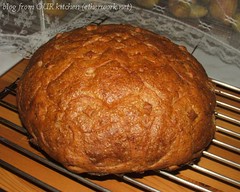