Made with arborio rice and a good rich stock, risotto is the ultimate comfort food. A very reasonable (virtually identical) facsimile can be made with barley instead of rice.

scroll down for more photos

About an hour before (or in the morning of the day for risotto), pour boiling water over dried mushrooms - just enough to cover. Place another bowl over top to keep the mushrooms under the water. When it is time to make the risotto, drain the mushrooms. Reserve the mushroom liquor.

close up of reconstituted mushrooms.

Heat chicken stock and leave on a very low simmer.

Fry onions and ham in olive oil til the onions are transluscent.

Set the burner to medium low heat and stir in rinsed arborio rice into onion mixture, making sure that all the rice kernels get covered in oil.

Add mushroom liquor and stir. Gradually stir in stock, adding a little at a time until the rice is the consistancy you like. The amount of stock will vary depending on the weather and humidity. Many recipe books say to stir constantly, but it's okay to leave the rice to bubble very gently and stir from time to time. Make sure the rice stays quite soupy as it tends to firm up after serving.

scroll up for more photos

Serve risotto with a steamed green vegetable and a grilled chop. Note that parmesan cheese is counter-indicated with mushroom risotto. There are plenty of intense flavours already.

Asparagus risotto is the ultimate spring dish to go with a grilled chop or a roasted chicken thigh. (Barley can be used instead of rice to make orzotto.) This asparagus risotto contains ALL of the asparagus - even the bottom ends of the stalks that are usually discarded. The spears are par-cooked before being added to the risotto but the uncooked ends are left uncooked.

After trimming the asparagus the bottom ends of the uncooked stalks were puréed with a little water. We used our Magic Bullet, a fabulous invention. We set the purée aside until the risotto was almost cooked and then stirred it in just before adding the par-cooked asparagus spears.

Chives are a perfect garnish for asparagus risotto. They are delicate enough that they do not detract from the flavour AND they are particularly pretty, especially if the flowers are used as well.

We served this asparagus risotto with oven roasted chicken. We deglazed the chicken pan with a little sherry and poured the liquor over the risotto for an added touch of flavour and brilliance.

We used reconstituted dried porcini mushrooms to make the risotto and garnished it with lightly warmed preserved artichoke hearts. A scattering of chopped parsley didn't add much flavour but made it pretty.

While buying the chicken, we purchased this most wonderful Italian olive oil from a small farm in Calabria: Sarafino, L'Aspromontano Extra-Virgin Olive Oil (sarafino.com/products/olive-oil/olearia-san-giorgio/extra-virgin) 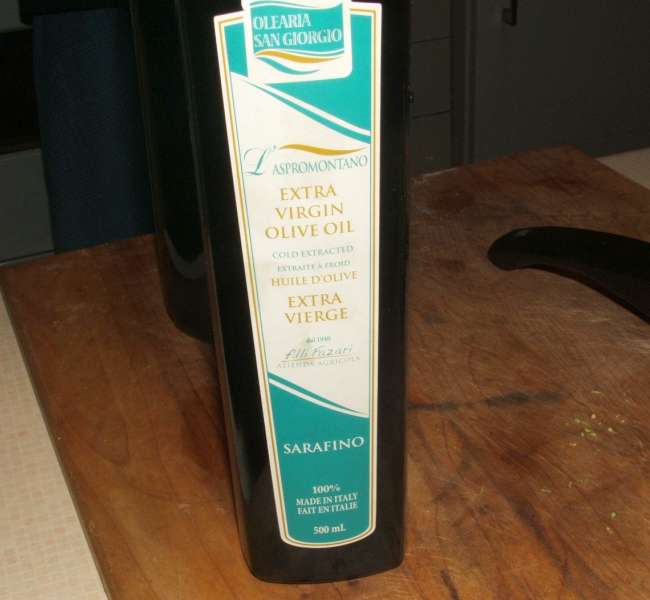 We gilded the lily by drizzling the risotto with this fruity olive oil. It was a delicious addition but almost too intense for the delicate flavour of the artichokes.

scroll down for more photos


blog from OUR kitchen: mmm... mushroom risotto ~ Use ALL of the Asparagus for Asparagus Risotto ~ Risotto with Preserved Artichoke Hearts

We used to bend asparagus and allow it to break at its natural point, theorizing that this is where the tender part starts. But because of the way the asparagus is pretrimmed at the vegetable store, there's a LOT of waste that way. We learned the following method from watching Laura Calder's TV show "French Cooking at Home": Use a very sharp knife and hit from above to find where the asparagus is no longer tough.

Which is more thrilling? Asparagus being in season, or lilacs in bloom beneath the open screened window? This furry black creature has NO difficulty deciding....