The Bread Baking Babes were crazy enough to make this bread as their July task. It calls for zero flour - its only ingredients are sprouted wheat berries, water, yeast, honey and salt. It should have been baked longer - the center is still somewhat gummy.

(scroll down for more photos)

We had these wheat berries in the freezer - they are among the ingredients in our multigrain bread. Alas, they refused to sprout.

After several rinsings, this is how they ended up: as spoiled mush.

We bought some organic wheat berries from the health food store. The store next door had these beautiful sour red cherries. We couldn't pass those cherries up!! (We made pie....)

As an experiment, I checked just a few berries to make sure they'd sprout. Happily, they did just that! This is how they looked after about 8 hours.

And this is how they looked the next morning!

Here are the wheat berries just sprouted and about to go in the fridge overnight to be mixed into dough the next morning.

After the first rise (it took only an hour to double because it was so ridiculously warm in the kitchen). The photo on the right is the dough reshaped to rise again. The dough was always sticky and never really became smooth.

The resulting bread was less than a resounding success.

Alas, not only was it heavy as lead but it was rather flat as well.

This bread is great thinly sliced, toasted and slathered with butter. 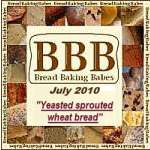