Swiss Chard: aloo saag . with cherries . with fennel and mustard seeds . with radishes and radish greens . in omelette

scroll down to see more images

Swiss chard is beautiful... the taste is reminiscent of beets. Here it is in aloo saag.

Sadly, the beautiful red almost disappears once the chard is cooked. But it still tastes great.

Ha! It turns out that if a little vinegar is added, the beautiful red stays completely intact even after the chard is cooked. And, of course, it still tastes great. Here it is after being stir-fried with onion, garlic, fennel and mustard seeds.

Swiss Chard is the perfect accompaniment for a grilled chop and oven roasted potatoes.

It really does turn almost black if no vinegar is added. It tastes delicious though and is very good with rice and corn. (Please see more photos of rice and corn.)

Cherries from 'Not Far From the Tree'

For some years now, I have been a volunteer picker for the wonderful charitable organization, "Not Far From the Tree" (notfarfromthetree.org) that includes a residential fruit-picking program to pick fruit (with permission, of course) that would otherwise go to waste. The cherry tree that we picked from on this particular occasion was extremely tall (higher than the three story house it was beside). So between 6 of us, after separating a third of the fruit picked to go to the home-owner and a third to go to a local charity, each of us took home about a pound of cherries. 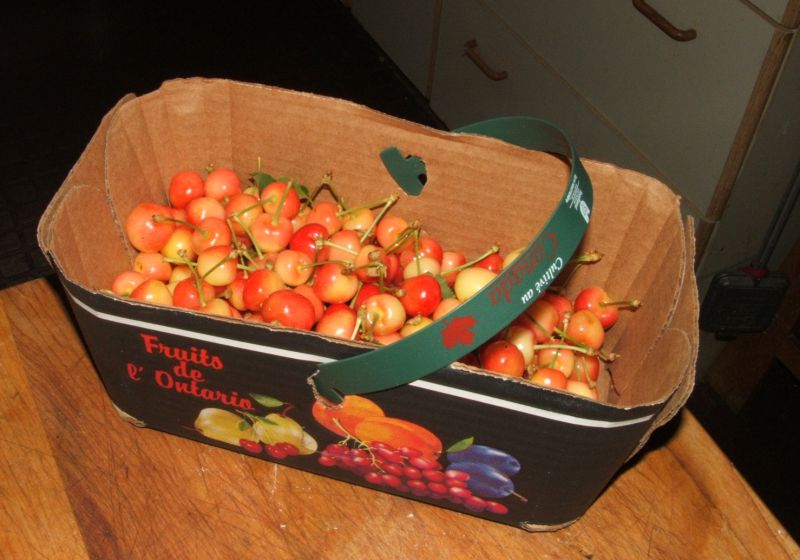 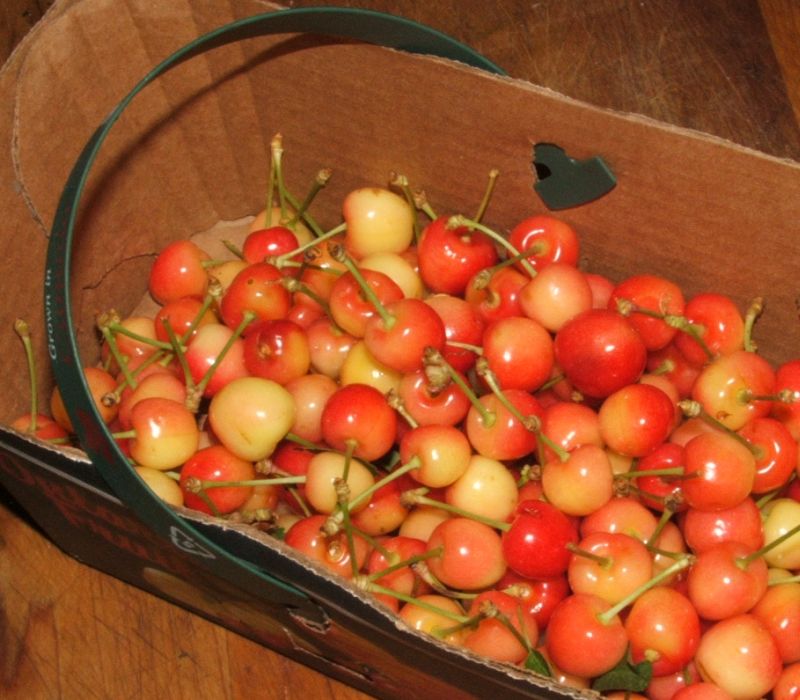 We had a few windfall cherries that were bruised on one side. So we decided to stir-fry them with red Swiss chard - from our garden!! (Please take a look at how we pit cherries.) 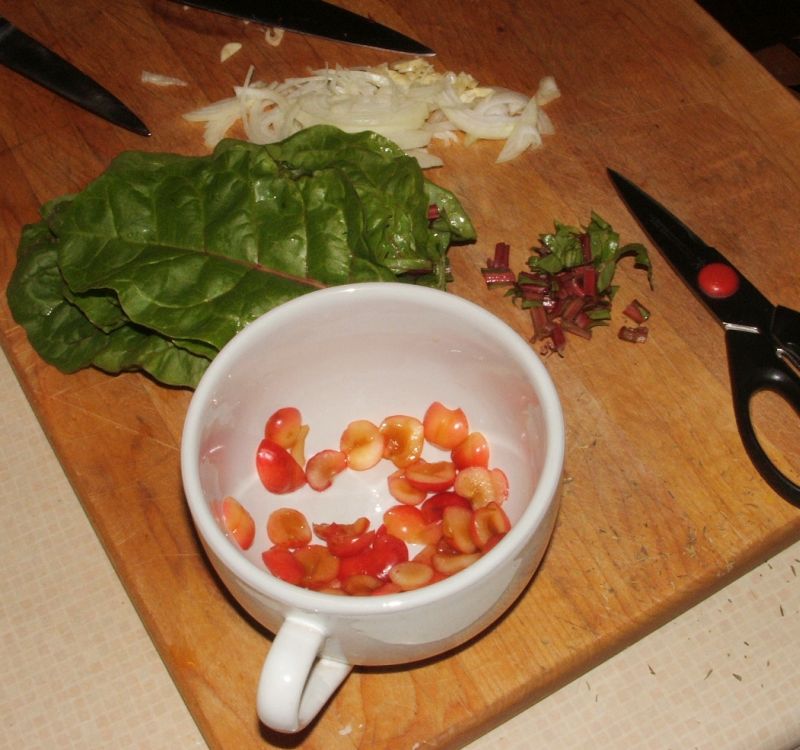 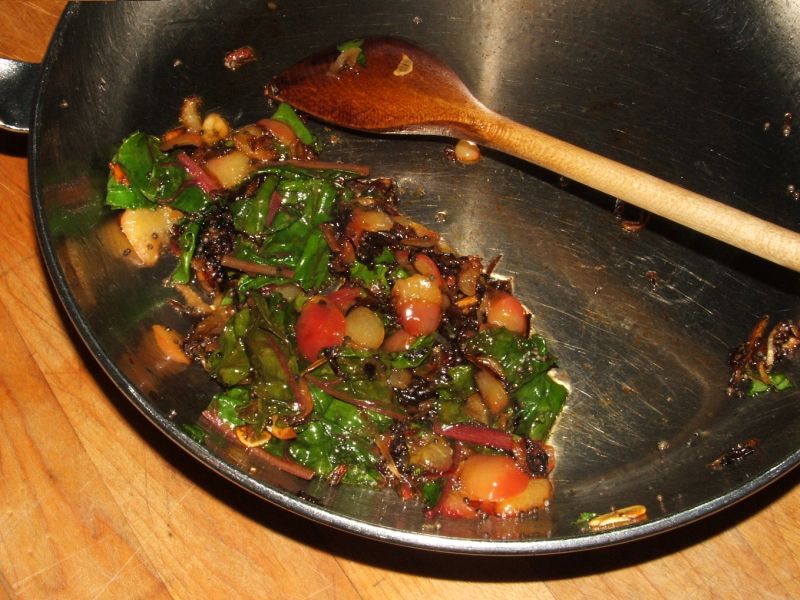 It's easy to pit the cherries. While, in general, we tend to leave the pits in when cooking cherries (the pits come out so much more easily once the cherries are cooked), when we do want to pit uncooked cherries, we use these handy little "S" shaped gadgets to remove the pits. The gadgets are readily available. They are expensive if purchased in a kitchen store, but very inexpensive to make your own. All you need are some of these:

Carefully, bend a clip out to make it look like an "S" and after washing the cherries well, start pitting. It might seem labour intensive but it's no more difficult or time-consuming than checking that jarred "pitted" cherries are indeed pit-free. (The cherries in these photos were sour red cherries for making cherry pie.)

To pit the cherries, first pull out the stem. It's very rare that the pit will come out at the same time!! For most of the cherries, after removing the stem, push the hook end into the cherry where the stem was. Fish around a little to catch the pit and pull it out.

The weather this spring and summer has been a bit wild. This is what we saw one morning in our back garden in late June after a big rainstorm the night before. 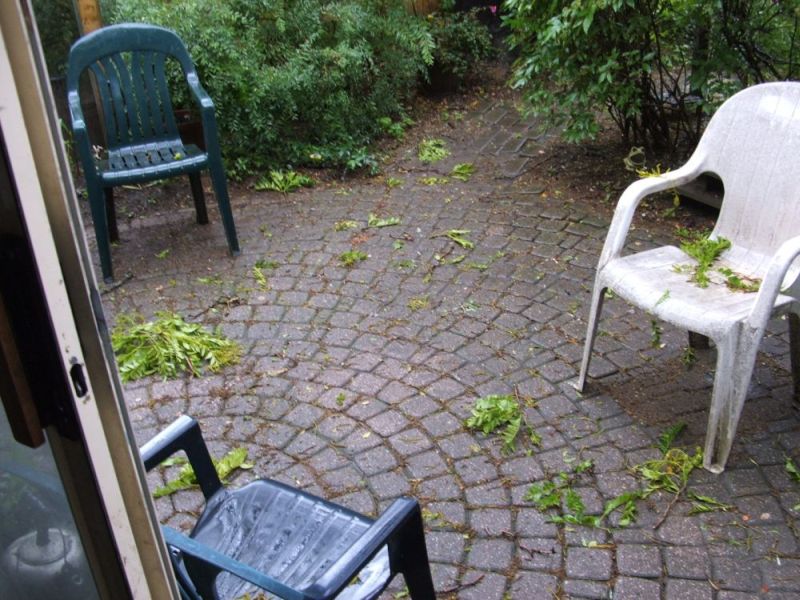 We headed out to the farmers' market and saw that the damage was a little more than we first thought.... 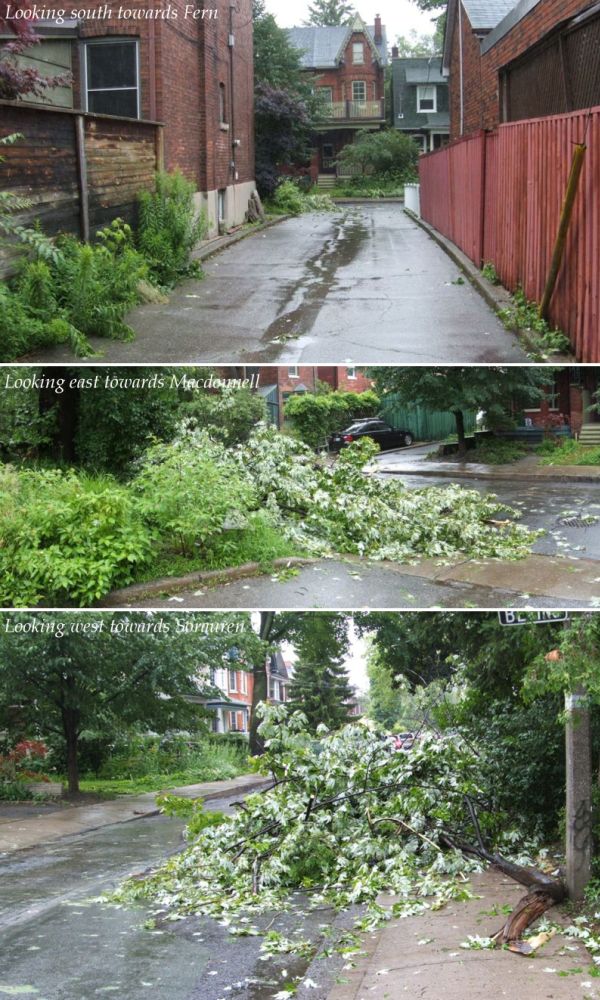 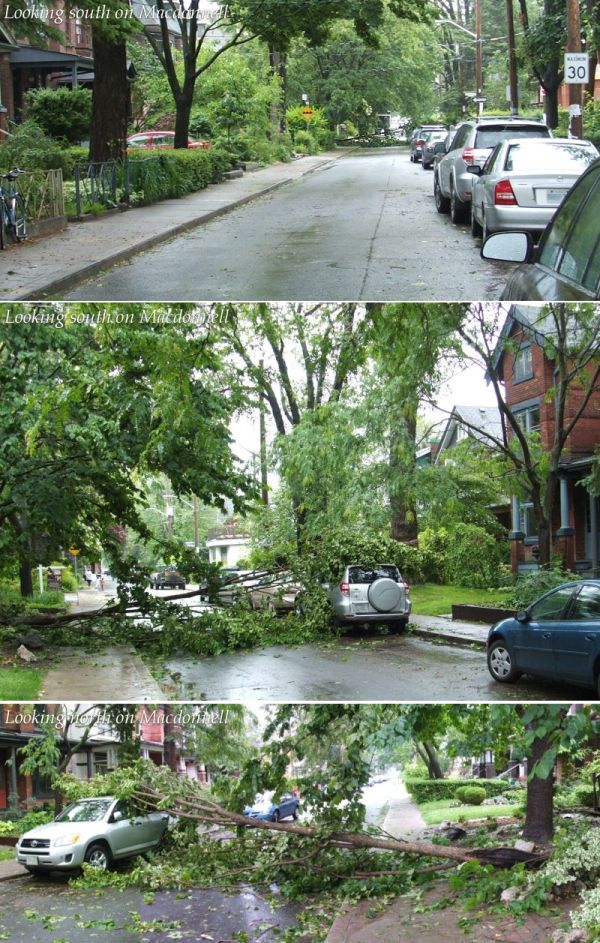