My sisters and I devised this variation after too many frustrating games in which we felt that one person was unfairly penalized by rotten letters.

If, after reading the following wonderful variations, you think this is far too complicated, I urge you to at least try the "no turns" portion of these altered rules. You will quickly see that the game is improved dramatically.

Please note that Hasbro Inc. or J.W. Spear & Sons Limited neither knows about nor endorses these rules. (This is not to say that they wouldn't endorse them if they knew.) Most people I know refuse to play this way, erroneously thinking that it is cutthroat Scrabble®. But let me assure you that we play only in the friendliest way, applauding successes (especially in complex exchanges) and bemoaning failures (especially in complex exchanges gone wrong).

First of all, all the official rules to SCRABBLE® apply (well, all but one...). But we have added three exciting features: No Turns, Exchange Tiles from the Board, and Enhanced Scoring.

Each person draws one tile from the bag. The closest to A draws seven tiles first. The other player(s) - it's really better not to play with more than three people with this version - then draw seven tiles each. Whoever has a word first can start the board play. However, I cannot stress enough that this is not a racing game. It is to your advantage to try to place all seven tiles at once in order to get the 50 point bonus for as many words as possible.

This is the only major deviation from the official rules. The dictionary can and indeed should be consulted at any time. All words on the board at any time must be real words. Each player is responsible for making sure that each word is a real word. There is no such thing as "challenging"; the only penalty for trying to place a misspelled or nonexistant word is having to remove the letters from the board. This is why the dictionary must be consulted before placing the word on the board. However, shopping for words in the dictionary is discouraged. A standard English dictionary is preferred. (Forget about that "Official Scrabble Dictionary" that contains all those fake two letter words that nobody even knows how to use in a sentence.) back to top

As soon as you have a good word to put on the board, you do so. There is no waiting for another person to put down a word. Each person puts words down, often simultaneously. If there is a dispute about the space being taken, the person with the higher possible score takes precedence. Think of it sort of as two people playing solitaire on the same board. (This version of the game only works with two players - three maximum!) You always have 7 tiles with which to work. This means that nobody is stuck with horrifying letters. If you don't like your letters, you can exchange them for ones in the bag. However, if you do exchange tile(s) from the bag, you must put tile(s) on the board the next time (thus following the official rule that one misses a turn if one throws the tiles back). Also, if one player is about to put all 7 tiles down, then the other person stops to watch in admiration... it often involves a big trading session from the board to retrieve high point tiles for reuse and big scores. Also, when we are putting small words down that may be blocking possible double double word scores and the other person is working madly to try to fill that space, we defer to the person who will receive the higher score.

Each person keeps her own score throughout the game with each "turn's" individual score in a list. Add these scores the END of the game. (Please see Enhanced Scoring.)

Because High scores are our ultimate goal. back to top

Exchange Tiles from the Board:

Once words are on the board, letters from the board can be exchanged with tray letters as long as a word is placed on the board at the time of the exchange AND as long as the new word(s) is(are) also a word(s). Here is an example:

These are your tiles:

Imagine that this is how the board looks.

The * represents the blank tile.

Step One in the exchange of letters turn

If you exchange the L for the C, the T for the N, the S for the *, you will then have made "arts" and "rot", thus fulfilling the rule that there must be a real word on the board at all times AND

your letters in your tray will now be:

You will be able to put all seven tiles down to make "machine" and "carts".

Step Two in the exchange of letters turn

Remember, the blank tile can represent any letter. While it may have been an "s" before, it now represents the "i" in machine.

Please note that when an exchange is made, all of the exchanged the letters must be put on the board immediately in the same new word.

If you're very skillful, you will have gotten the C on a double letter score and the whole word on a double word score. That way you not only get your 50 point bonus for using all seven tiles, but you can count any bonuses on the C twice because you have made two words with it. When you add up your score for this particular play, you only get points for "machine" and "carts". You do not get points for "rot" because it was already on the board.

If you're very very very skillful, you will be able to use the Q, X, and/or Z several times in one game.

Another example: Notice that there is a chance to do an exchange in the image below.

On the board is a perfect opportunity to do an exchange AND use all seven tiles. (Hint: let the blank and the "A" be your friends.) 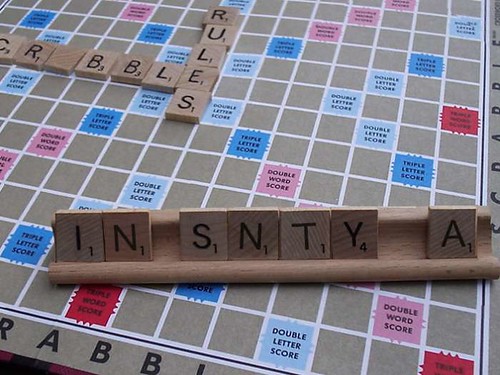 Remember that the * represents the blank tile.

(Many thanks to Krystle Fleming for the use of the Scrabble photo that is licensed under the Creative Commons Attribution 2.0 Generic license. ) back to top

The game is over when the tile bag is empty and one person has used up the tiles on her tray. This is the only place in the game that a race is on. When the last tile is being drawn from the bag, an announcement must be made to that effect. Both players will suddenly, in a frenzy, try to make two and three letter words to use up all the tiles left in their trays. It is definitely an advantage to empty one's tray first. The incentive to finish first is enhanced by not only subtracting the value of the leftover tiles from the score of the person who still has tiles left, but adding the same value to the score of the person who finished first.

Please remember, each person keeps her own score throughout the game with a list of each "turn's" individual scores. Please do NOT add the scores as you go. We also like to make a note of any words that receive the 50 point bonus as well. This helps to ensure that the 50 point bonus has been given.

Clarification: Once a bonus square has already been covered, even if a tile on the bonus square is being exchanged, the new letter does not receive a bonus.

To add insult to injury, the person's (who had no tiles left over) high scores that were multiplied (but before multiplication) are added together and multiplied by the value of the tiles leftover on the rack of the person who finished second and that number is subtracted from her score and added to the score of the other person. This makes for incredibly high final scores (and very low ones by the loser). I have to admit that one sister is more successful at replacing tiles and thinking of 8 letter words that go onto two triple word score slots than I am, so I have frequently ended up with a negative score. The most spectacular loss for me was when she got 17958 and I got -5448 (yes, that is negative five thousand four hundred forty eight). back to top


See? It's easy when you know how!

Okay, I admit it... it's ridiculously complicated.